India and Uzbekistan signed three MoUs in the field of military medicine and military education, training and capacity building.

India has signed three important agreements with Uzbekistan to enhance cooperation in military ties. The memorandums of understanding (MoU) were signed after a high-level delegation meet between the two nations.

The agreements were signed on the sidelines of the Council of Heads and Governments (CHGs) of the Shanghai Cooperation Organisation. The meeting was held between Union Defence Minister Rajnath Singh and the Defence Minister of Uzbekistan, Major General Bakhodir Nizamovich Kurbanov on November 2, 2019.

1. MoU on cooperation in Military Medicine between the armed forces of the two countries.

2. Two MoUs were signed between institutes of higher military learning of the two countries for training and capacity building. 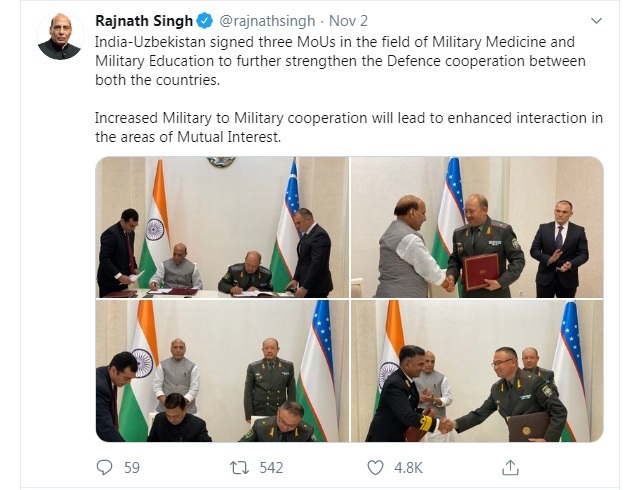 The Indian Defence Minister and his Uzbek counterpart agreed that both the nations will continue to cooperate and work together to further enhance their engagement level in defence, in line with India’s strategic partnership with Uzbekistan.

The ministers agreed that their enhanced cooperation will be based on a higher level of mutual trust and respect between the two countries, along with their shared views on a host of regional and global issues, including combating terrorism and extremism and regional stability and security.

India offered a concessional credit line worth USD 40 million to Uzbekistan for the procurement of goods and services from India.

The MoUs in the field of military medicine and training and capacity building were a result of the interactions that were initiated from the signing of an MoU on military Education between the two countries in October 2018.

During the agreement signing, the Defence Ministers of India and Uzbekistan participated in the first-ever exchange over a video-link between College of Defence Management in Secunderabad and Armed Forces Academy of Uzbekistan in Tashkent.

The Defence ties between India and Uzbekistan were further enhanced after the visit of the Defence Minister of Uzbekistan to India in September 2018.

Ever since, there has been an increase in direct exchanges between the armed forces of the two countries in education, training and capacity building. 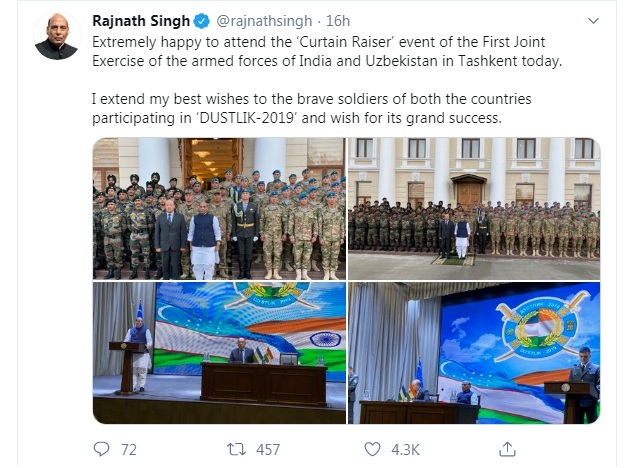 ‘Dustlik 2019’ will be held from November 4-13, 2019 at Chirchiq Training Area near Tashkent. It will primarily focus on counter-terrorism, an area in which the two countries share a common concern.

A contingent from the Indian army will train along with the Uzbekistan Army in the exercise. The exercise aims to enable the exchange of best practices and experiences between the armed forces of the two countries.

Also read: What is UCCN: Mumbai and Hyderabad recently joins the list