The weather forecast for India vs New Zealand at Trent Bridge predicts 80 percent chance of rain. 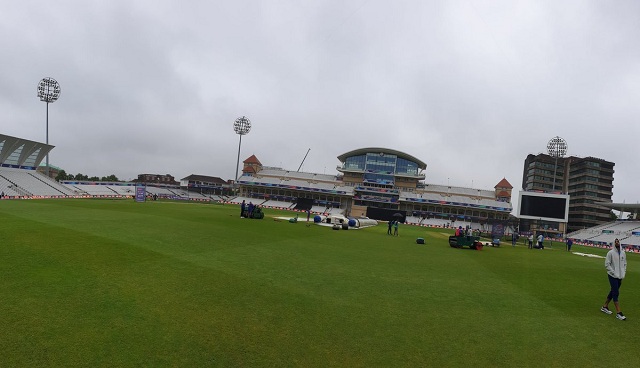 It is a gloomy start for India and New Zealand as their clash in the ICC World Cup 2019 is delayed due to rain at Trent Bridge in Nottingham. According to the latest report, the rain has got heavier and the covers are back on. This is bad news for the Indian fans who were looking forward to the match. If rain does stop the play, it will be profitable for New Zealand, as the team will still be ahead in the points table with 7 points.

England’s Met Office had previously issued a ‘yellow warning’ for heavy rain in Nottingham area from June 10 till mid-day of June 13, the day on which India will take on New Zealand in their third ICC World Cup match. Both the teams are currently the only unbeaten teams in the ongoing cricket world cup.

The Thursday weather prediction for the Nottingham area includes variable cloudiness along with rainy spells. The maximum temperature is expected to be around 13 degrees during the day.

The sun hasn’t come up in Nottingham since Monday so it is worrisome for both the teams, as the pitch has been under covers all this time and it remains to be seen how the outfield will dry up before the match.

The ICC World Cup 2019 has seen the most number of washed up matches till now. The following three world cup matches had to be abandoned following heavy rain at the venue: