It lists out eight most important challenges that India must overcome in building New India in a detailed manner. The important challenges are – unemployment, demographic challenges, infrastructure bottlenecks, health and education, defence and security, disaster management and climate change, governance issues and social problems. 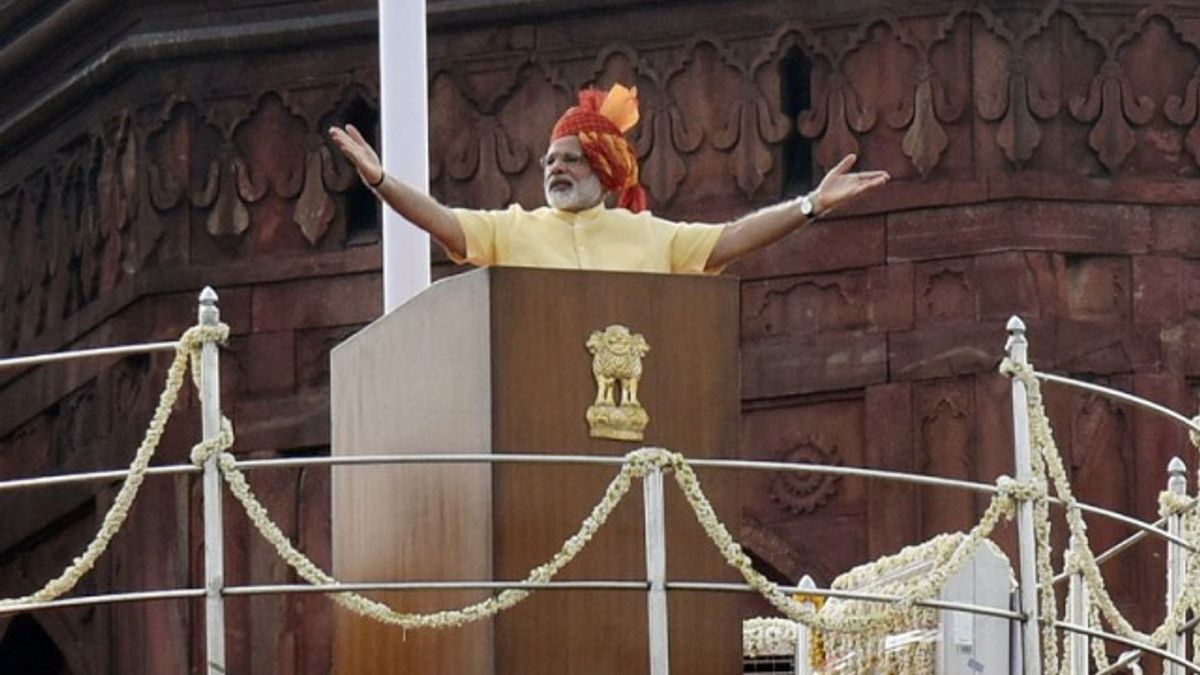 On 15 August 2017, Prime Minister Narendra Modi unveiled his vision for New India from the ramparts of the historic red fort. During his fourth independence day speech, Modi urged the fellow citizens to come forward to build a New India by 2022. Outlining his vision, the Prime Minister explored the strengths of the Indian society and the successful journey of independent India in the last 70 years.

It is against this backdrop, we are presenting a list of the most important challenges that India must overcome in building New India by 2022 as proposed by Narendra Modi.

2. Demographic Challenges: India’s current population is 1.34 billion and at the rate of growth of more than 1% per annum, it is estimated to reach 1.40 billion by 2022. As the resources – land, water, mineral and energy – are limited, the productivity of farms and the industries should be enhanced at the same rate. Given the investment and technology required to make it possible and India’s experience in recent years in doing so, it seems like a formidable task. We should also take note of the fact that, overcoming this challenge is of vital significance to reap demographic dividends as about two thirds of population is below the age of 35 years.

3. Infrastructure Bottlenecks: To build New India by 2022, it is essential to have quality social and economic infrastructure. The country has made considerable progress on the infrastructure front in recent years. As per the Global Competitive Index – Infrastructure of the World Economic Forum (WEF), India’s rank has gone up from 81 in 2015-16 to 68 in 2016-17.

However, this improvement is not sufficient and is far below the expectations of the ever increasing population. The WEF report identified that – “inadequate supply of infrastructure” as one of the most problematic factors for doing business in India.

4. Health and Education: Though independent India has witnessed considerable growth in the fields of education and health over the 70 years, the progress is not adequate. So far, the focus has been on ‘quantity’ or expansion of services through more schools, colleges and hospitals; But less emphasis was on quality aspect. The neglect on the quality aspect of vital sectors like – education and health – has been showing adverse impact on the quality of life, which is evident in the latest Human Development Index of the United Nations. In the 2016 rankings, India slipped to the 131st rank among the 188 countries surveyed. India’s human development index (HDI) value of 0.624 puts it in the “medium human development” category alongside Pakistan and other countries such as Congo and Namibia. Hence, to build New India, renewed efforts must be undertaken to improve the quality of life through better health and education facilities.

5. Defence and Security: India has been facing lot of security challenges from internal and external sources. Problems like – cross border terrorism, infiltration, border issues with China and Pakistan, separatist tendencies in the North East and Left Wing Extremism have been posing challenges to the national security. In view of China’s recent aggressive posture in Doklam standoff and nine-dash line in the South China Sea coupled with the encirclement strategy, and the One Belt One Road initiative and the associated China-Pakistan Economic Corridor (CPEC) is expected to pose major challenge to the Indian Defense establishment in the coming five years.
The threats to cyber security and space security are also expected to increase in the coming years. The growing digitalization of the financial activities and organizational processes and the race for the supremacy in the space may pose serious security threats and warrant increased an allocation of financial and human resources in the coming five years.

6. Disaster Management & Climate Change: Apart from man-made disasters, India is vulnerable, in varying degrees, to a large number of natural disasters. More than 58.6% of the land mass is prone to earthquakes of moderate to very high intensity, 12% of its land is prone to floods and river erosion, close to 5,700 kms, out of the 7,516 kms long coastline is prone to cyclones and tsunamis and 68% of its cultivable area is vulnerable to droughts.

The frequency and severity of disasters like floods and droughts has been accentuated by the adverse impacts of global warming and associated climate change. The recent flash floods in Mount Abu (2017), Chennai (2015), Kashmir (2014) and Uttarakhand (2013) indicates this trend. In view of the expected rise in the disasters and its impact on the economy, especially on agriculture, and social life should be reduced to the extent possible and it is a no mean task for the government due to the magnitude of complexities involved.

7. Governance Issues: During his speech, Prime Minister Narendra Modi urged people to embrace a  New India, where people are not driven by the system, rather the system is driven by the people. To realize this, major irritants in the county’s governance issues such as corruption, criminalistation of politics and red tapism should be addressed with more vigor.  Despite reduced corruption levels, the Transparency International’s Corruption Perceptions Index 2016 declared India as only the 79th cleanest country among the 176 countries surveyed. Since the administrative corruption impact the common man severely and a major road block to the transformation of India, the policy makers should address this issue.

8. Social Problems: To build a prosperous and secure New India, the Indian society must get rid of social evils like – discrimination and violence based on caste, religion and gender. Communal violence has been on the rise in recent years, which was also noted by the report of the United States Commission on International Religious Freedom. Similarly, the Union Ministry of Home Affairs (MHA) reported 751 conflicts between religious communities, which resulted in 97 deaths and 2,264 injuries in 2015, jumping from 644 communal incidents, resulting in 95 deaths and 1,921 injuries in 2014.

Besides the above mentioned challenges, issues like growing disparities in income, agriculture distress, regional development disparities and dependence on imports for energy needs are some of the other challenges before the government.

Narendra Modi Government has chosen 2022 as the target year as it marks the completion of 75 years of independence. India’s journey towards freedom had never been easy and required a strong leadership like Mahatma Gandhi. Similarly, in order to achieve the goal of New India, India needs not only a strong political leadership but also responsible citizenry who are committed to the ideals of the constitution.