Indian weightlifter Mirabai Chanu created a new world record in Clean and Jerk after she lifted 119 kg at the Asian Weightlifting Championships in Tashkent. 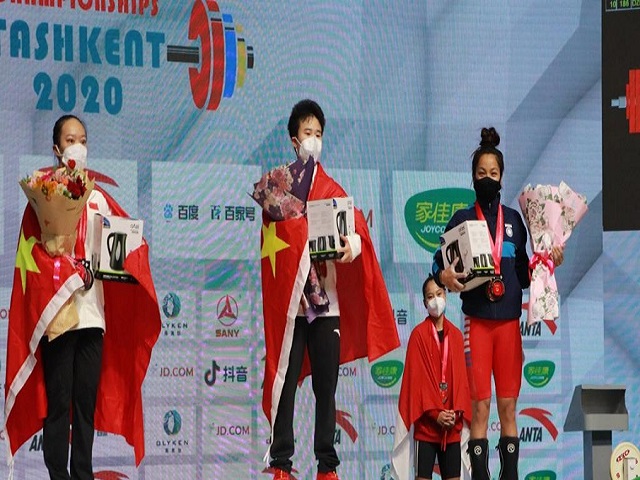 Indian weightlifter Mirabai Chanu created a new world record on April 17, 2021 in Clean and Jerk after she lifted 119 kg at the Asian Weightlifting Championships in Tashkent.

Mirabai also created a new national record as she lifted a total of 205 kg, including 86 kg snatch + 119 kg Clean and Jerk which also won her the bronze medal at the tournament.

I am happy with my performance at the Asian Championship 2021. Thank you everyone for your love and support. I will continue to work hard and improve myself. pic.twitter.com/9pJERrVj80

The previous clean and jerk world record was 118 kg, which was set by Chinese weightlifter Jiang Huihua in 2019. The Chinese lifter finished second this time and won the silver medal by lifting 207kg (89kg+118kg).

•The cumulative mark of 205 kg is a personal best for former world champion Mirabai, as her earlier best was 203kg (88kg & 115kg) from the Indian Nationals in February 2020.

•With her bronze finish, Mirabai has sealed her spot at the 2021 Tokyo Olympics. The result will also boost her chance at the Olympics as only one Chinese lifter will be allowed to participate in the event.

•The record lift also made the 26-year-old from Manipur the first Indian weightlifter to create the world and Asian records simultaneously.

Congratulations are pouring in for the young weightlifter from all corners of the country including from sportspersons, Chief Ministers of states and Union Sports Minister Kiren Rijiju.

In her first international competition in more than a year, @mirabai_chanu makes a new national record of 205 kgs at the Asian Championships and won bronze medal. Her perfect clean and jerk lift of 119 kg is a new world record!
Target Olympic Podium Mirabai! pic.twitter.com/ohOSOWZ94P

Indian fencer Bhavani Devi had scripted history last month by becoming the first fencer from India to qualify for the Tokyo Olympics. The 27-year-old qualified for the Olympics through the Adjusted Official Ranking (AOR) method.