Jharkhand assembly election 2019 schedule: all you need to know

Jharkhand assembly election 2019 schedule: The counting of votes will take place in Jharkhand on December 23, 2019.

Jharkhand assembly election 2019 schedule: Jharkhand Legislative Assembly Elections 2019 will be held in five phases from November 30 in the 81 constituencies of the state. The counting of votes will take place on December 23, 2019. 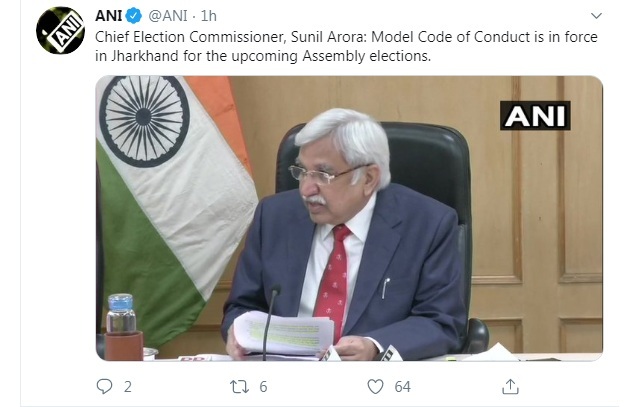 How will elections happen in Maoist-affected areas?

The Election Commission revealed that an ECI team led by Sudeep Jain, Deputy Election commissioner, along with some colleagues, had visited Jharkhand on October 17 and 18 to take stock of the preparedness in the state and met all the political parties and key state officials.

Adequate personnel of the central armed forces has been deployed in the state for security during the elections so that listed voters from all sections of the society can exercise their right to vote without fear. Special security arrangements will also be in place for the Maoist-affected areas.

The Election Commission identified 19 districts out of the total 90 as majorly Maoist-affected areas and out of these, 13 were identified to be the worst-affected. The Election Commission clarified that other districts are also affected by the left-wing extremism but 19 are extreme and 13 are very extreme. Overall, 67 assembly constituencies are majorly Maoist-affected.