Jharkhand Election Results 2019: The JMM-Congress-RJD alliance staged massive victory with 47 seats in the 81-member Jharkhand assembly on December 23, 2019. The ruling BJP was reduced to 25 seats and incumbent CM Raghubar Das was dethroned from his bastion Jamshedpur East by independent Saryu Roy.

The JMM won 30 seats, Congress won 16 seats and the RJD won 1 seat, while the BJP won just 25 seats in the final result tally of Jharkhand Assembly Elections 2019. Among other parties, the JVM bagged 3 seats, AJSU won 2 seats and the CPI-ML and NCP won 1 seat each. Two independents including Saryu Roy also won in their respective constituencies.

Prime Minister Narendra Modi congratulated Hemant Soren for the victory of his alliance and thanked the people of Jharkhand for giving the BJP the opportunity to serve the state for five years. Union Home Minister Amit Shah also tweeted saying that the BJP respects the mandate and thanked all the party workers for their hard work.

The Jharkhand Assembly Elections 2019 had taken place in five phases between November 30 and December 20 and the counting of votes has taken place on December 23, 2019. JMM's Hemant Soren is likely to be the next Chief Minister of Jharkhand.

Live Updates @8.00 pm: JMM Chief Hemant Soren thanked the people of the Jharkhand for the mandate. He dedicated the victory to his father and former Jharkhand CM Shibu Soren. Hemant Soren had contested the Jharkhand Elections from two seats-Barhait and Dumka. He won the Barhait constituency with a massive margin of 25740 votes and Dumka with a margin of 13188 votes, despite trailing initially. 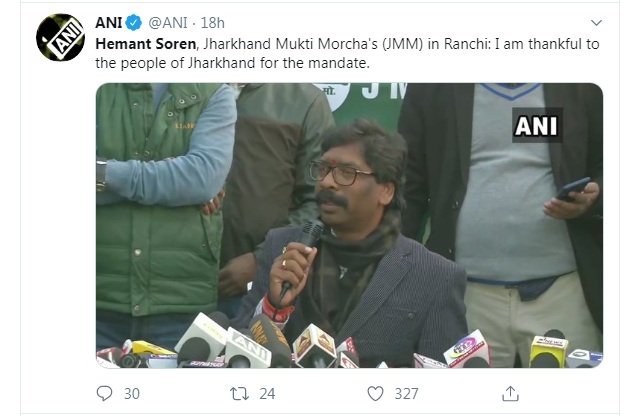 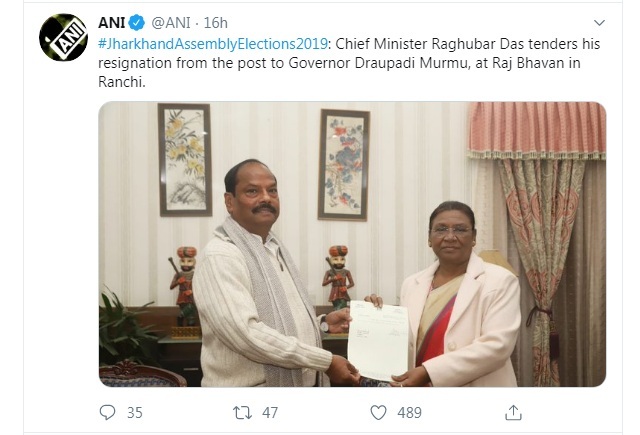 Live Updates @8.00 pm: The JMM-Congress-RJD alliance has won a clear majority in the Jharkhand Assembly Elections 2019 with 47 seats in the 81-member state assembly, while the BJP was reduced to just 25 seats. Jharkhand Chief Minister Raghubar Das lost his bastion constituency, Jamshedpur-East against Saryu Roy ( independent). 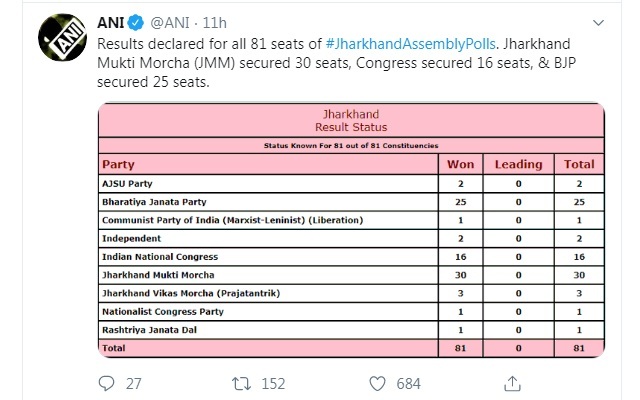 Live Updates @7.02 pm: With the JMM-led opposition alliance headed for a clear win, PM Narendra Modi congratulated JMM's Hemant Soren through a tweet for leading the alliance to victory in the Jharkhand polls. PM Modi also thanked the people of Jharkhand and stated that the BJP will continue to serve the state.

Union Home Minister Amit Shah also tweeted saying that the BJP respects the mandate of the people of Jharkhand. He further thanked the people of the state for allowing them to serve for five years and praised all the BJP workers for their tireless efforts.

Live Updates @4.40 pm: JMM has emerged as the single-largest party as per the latest trends with a lead in 29 seats. BJP is currently leading in 25 seats and has won 2 seats. If the JMM+Congress alliance manages to maintain its lead till the end, the alliance will get clear majority in Jharkhand Assembly Elections 2019.

Jharkhand has 81 constituent assemblies and only 41 seats are required to prove majority in the assembly. The Congress is currently leading on 14 seats and it allies -the JMM is leading on 29 seats and the RJD on 2 seats. The BJP is contesting alone in this election, but it may, however approach the AJSU or the JVM for support to form government in Jharkhand. 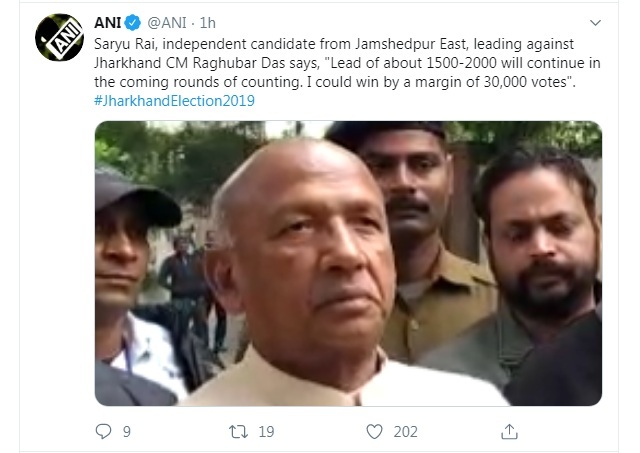 Following are the other close-contest seats in Jharkhand assembly elections 2019: 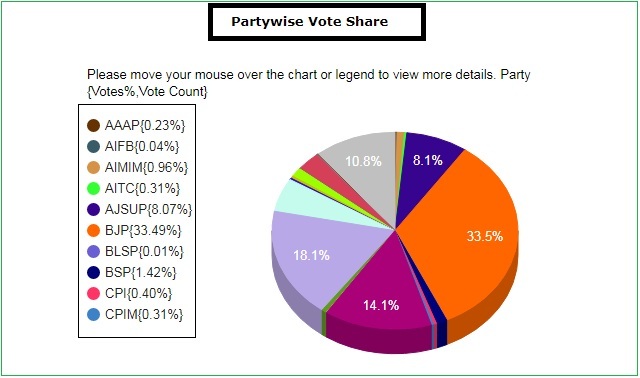 Live Updates @10.33 am: The opposition alliance takes lead over the BJP in Jharkhand. The Congress+JMM alliance is now leading on around 40 seats, while the BJP is leading on 29 seats. 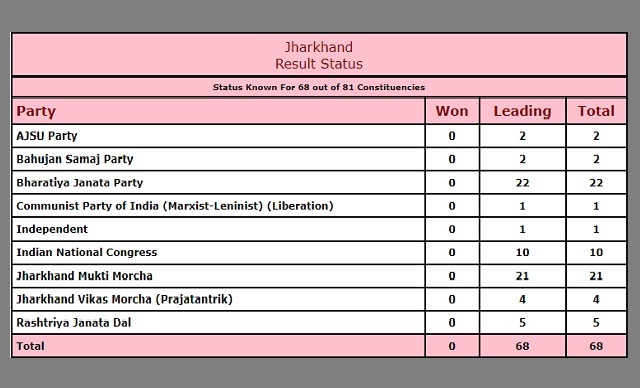 Live Updates @10.00 am: Jharkhand CM Raghubar Das  is leading from Jamshedpur (East) by 342 votes. Hemant Soren is leading from Barhait seat by 664 votes. Soren is, however, trailing from Dumka by 6329 votes against BJP's Lois Marandi. 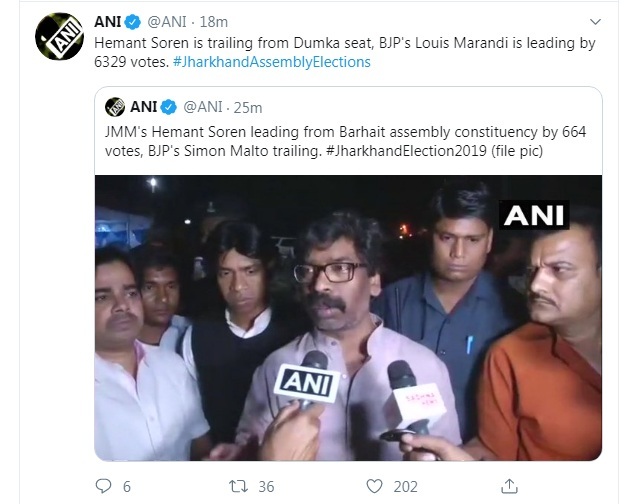 Live Updates @8.40 am:  The Jharkhand exit poll results 2019 were published on December 20, 2019 after the conclusion of the final phase of polling. The pollsters projected major gains for the opposition alliance of Congress+JMM+RJD.  A majority of the pollsters predict a hung assembly with the BJP or the JMM emerging as the single-largest party. The Axis My India exit poll predicted a win for the opposition alliance.

Live Updates @8.20 am:  Jharkhand Elections: The major political parties contending the elections include the BJP, JMM, Congress, RJD, AJSU and JVM. While the BJP and AJSU are fighting solo, the Congress, JMM and RJD are contesting in an alliance. 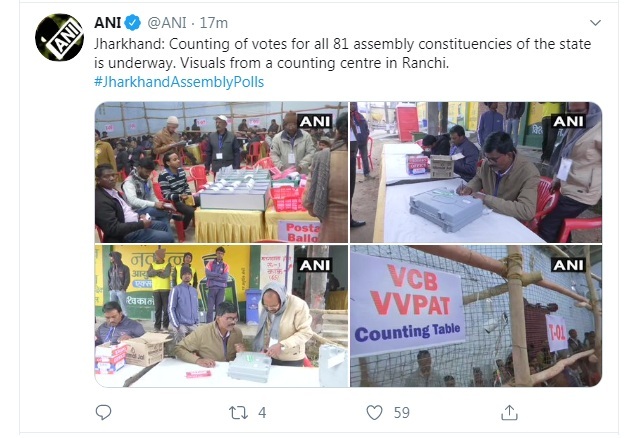 Live Updates @8.00 am:  Welcome to the live coverage of the Jharkhand Election Results 2019. The counting of votes has begun in Jharkhand.