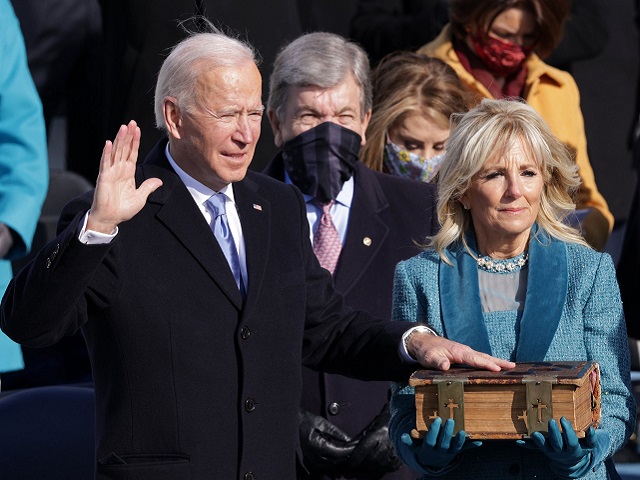 Joe Biden was sworn in as the 46th President of the United States in the 59th inauguration ceremony at the West Front of the US Capitol on January 20, 2021. He is the oldest US President to take oath, as he had turned 78 years old in November 2020.

While Lady Gaga performed the national anthem, Jennifer Lopez sang her version of "This Land Is Your Land" during the inauguration ceremony.

The inauguration took place at the backdrop of an unprecedented health crisis and protests in the US.  Biden had earlier served as the Vice President of the United States during the Obama administration and Kamala Harris had served as a US Senator from California from 2017 to till January 19, 2021, when she resigned from her post.

It’s a new day in America.

Prime Minister Narendra Modi was one of the first world leaders to congratulate Joe Biden on assuming office as President of the United States of America. He tweeted saying that he looks forward to working with him to strengthen India-US strategic partnership.

My warmest congratulations to @JoeBiden on his assumption of office as President of the United States of America. I look forward to working with him to strengthen India-US strategic partnership.

PM Modi added saying that India-US partnership is based on shared values and we have a substantial and multifaceted bilateral agenda, growing economic engagement and vibrant people to people linkages.

Biden also bid an emotional goodbye to his home state of Delaware before departing for Washington on the eve of his inauguration ceremony. He thanked its residents for serving as the launchpad for his decades-long career in public service.

The President-elect said he had just one regret that son Beau Biden, who died in 2015, could not be there for his inauguration.

During his victory speech in his hometown Wilmington in November 2020, Biden had pledged to unite the country as he called it 'a time to heal in America'. He had pledged to be a President who seeks not to divide, but to unify and who doesn't see red states and blue states, only sees the United States.

Prior to inauguration day, Joe Biden and Kamala Harris took part in a lighting ceremony on January 19, 2021 to honour those who lost their lives due to COVID-19 at the Lincoln Memorial Reflecting Pool. The people across the country were invited to join the ceremony by ringing church bells and  lighting building.

Tonight, in Washington, D.C. and across the nation, we came together to honor the over 400,000 Americans we’ve lost to COVID-19. The last year has tested us in unimaginable ways, but now it’s time we begin to heal and overcome — together. pic.twitter.com/DuWhN1xjNO

Though we may be physically separated, we, the American people are united in spirit. pic.twitter.com/s5v4KIjbSX

• US President Donald Trump highlighted his accomplishment as President during his farewell address on January 19, 2021 and offered best wishes to the incoming administration.

• In a 19-minute pre-recorded video, Trump said that as he concludes his term as the 45th president of the United States, he stands proud of all the achievements and thanked his supporters for electing him in 2016, describing it as "an honour beyond description."

• He highlighted some of his biggest achievements including his economic legacy, Abraham Accords peace deals in the Middle East and handling of China. He further condemned the Capitol Hill riots and said that America is a nation of incredible, decent, faithful and peace-loving citizens who all want our country to thrive and flourish.

• The address was released a day ahead of President-elect Joe Biden's inauguration. However, Trump did not mention Joe Biden by his name during the address.

• Trump had earlier announced that he will not be joining Joe Biden at the inauguration ceremony. It is an age-old custom in the United States for an outgoing president and other former presidents to sit behind the new president, symbolising the peaceful transfer of power.

• Trump's departure ceremony took place in military style on Marine One from Joint Base Andrews early in the morning on January 20th.  US Vice President Mike Pence did not attend the ceremony.