Jagat Prakash Nadda has been elected as the new National President of the Bharatiya Janta Party, succeeding Amit Shah.

Jagat Prakash Nadda became the 11th National President of the Bharatiya Janata Party (BJP) on January 20, 2020. He was elected unopposed to the position.

JP Nadda had emerged as the only candidate for the top post following a nomination process at the party’s headquarters in New Delhi. He would be succeeding Amit Shah, who had helmed the party for five and a half years.

Nadda had been appointed as BJP’s working president in June 2019, after Amit Shah was sworn into the Union Cabinet as the Minister of Home Affairs. Under Amit Shah’s reign as President, the party had swept the 2019 Lok Sabha Elections with a massive majority. 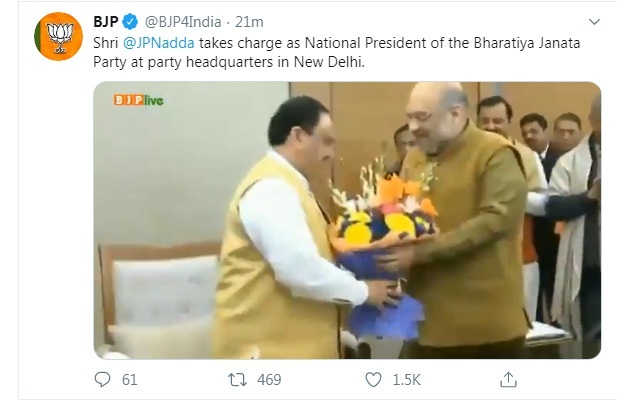 Who is JP Nadda?

• Jagat Prakash Nadda, former Union Minister of Health and Family Welfare, had been serving as the working president of the Bharatiya Janta Party since June 2019.

• He is a member of the Rajya Sabha from Himachal Pradesh and Parliamentary Board Secretary of the Bharatiya Janata Party.

• He had earlier served as a Minister in the Himachal Pradesh state government. He was first elected to the HP legislative assembly in 1993 and was re-elected in 1998.

• While he was the leader of his party in the assembly during his first term, he served as the Health Minister during his second term.

• He was elected to the state assembly yet again in 2007 and was inducted in Prem Kumar Dhumal’s cabinet as the Minister for Forest, Environment, Science and Technology.

• JP Nadda did not seek re-election in the assembly in 2012 and was later elected to the Rajya Sabha.

• In 2014, he was elected as the Union Health Minister during PM Narendra Modi’s first term after a cabinet reshuffle.

• JP Nadda was associated with the Akhil Bharatiya Vidyarthi Parishad (ABVP) from his college days. He later joined BJP’s youth wing and rose through the ranks.

Comment
JP Nadda has been appointed as the new National President of the BJP at a time when the party is trying to maintain its dominance in the nation. Despite major win during the 2019 Lok Sabha Elections, the party faced major losses in the recent state elections.