Pinarayi Vijayan took the oath as the Chief Minister of Kerala for the second consecutive time at 3.30pm today, May 20, 2021. He was sworn in by Governor Arif Mohammad Khan. 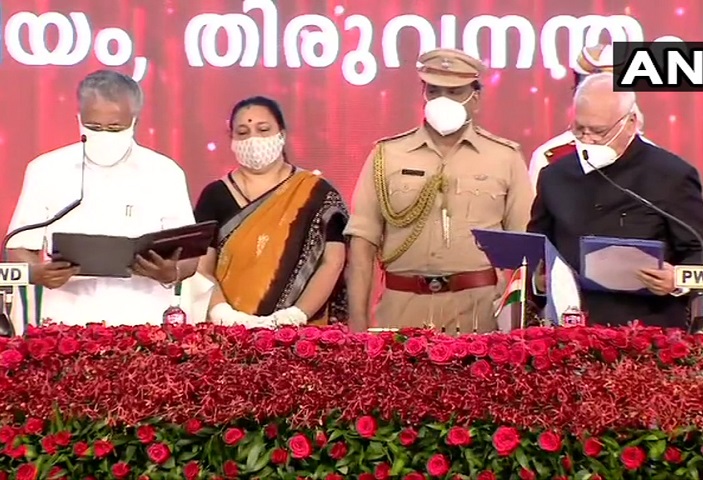 Pinarayi Vijayan took the oath as the Chief Minister of Kerala for the second consecutive time at 3.30pm today, May 20, 2021. He was sworn in by Governor Arif Mohammad Khan.

The swearing-in ceremony is taking place outdoors at the Central Stadium in Thiruvananthapuram  with 500 people in attendance with all Covid protocols in force. Twenty-one cabinet ministers will also be sworn in along with the Chief Minister.

Thiruvananthapuram: Pinarayi Vijayan takes oath as the Chief Minister of Kerala, being sworn in by Governor Arif Mohammad Khan. pic.twitter.com/HyWRDh9u3u

The CPI(M) state committee had appointed Pinarayi Vijayan as the CPI(M) parliamentary party leader and Kerala's Chief Minister on May 18, 2021. Pinarayi Vijayan's new cabinet is expected to have all new faces after the party decided to drop all the sitting ministers including the popular health minister KK Shailaja, who has been appointed as the party whip.

•The Chief Minister said prior to the ceremony that all those attending the oath-taking should have a negative Covid test report,  taken 48 hours before or should have taken both the doses of the vaccine.

•The opposition led by Congress has decided to boycott the swearing-in due to the COVID-19 pandemic.

•The Kerala High Court called for strict adherence to COVID-19 protocol, saying that no COVID restrictions should be diluted or altered during the swearing-in ceremony.

CPI(M), which is the largest coalition partner, is expected to get 12 Ministerial berths, while CPI, the second-largest party will have 4 Ministers and Kerala Congress (M), Janata Dal (S),  Nationalist Congress Party (NCP), Janathipathya Kerala Congress (JKC) and the Indian National League (INL) would have one representative each.

The immensely popular Kerala Health Minister, KK Shailaja, whose swift measures during the COVID-19 pandemic had drawn praise from the world over, has been dropped from Pinarayi Vijayan's new cabinet.

Journalist turned CPI(M) leader Veena George is likely to replace KK Shailaja as the new Health Minister. However, this is yet to be confirmed.

Responding to this, CPI(M) Parliamentary Party leader Pinarayi Vijayan said that the decision was made by the party and that an exemption cannot be made for KK Shailaja as they were other performing ministers as well in the outgoing government.

The LDF claimed a resounding victory in the 2021 Kerala State Assembly Elections by winning 99 of the total 140 seats, returning for a record second consecutive term in office.

While the Congress-led United Democratic Front (UDF) was reduced to 41 seats, the BJP could not retain its lone seat in the 2021 election.

The CPI-M had 12 ministers in the outgoing Vijayan cabinet, its second-biggest ally CPI had four and Nationalist Congress Party (NCP), Congress (S) and Janata Dal (S) had one each.