Mahinda Rajapaksa sworn in as new PM of Sri Lanka: All you need to know

Former President Mahinda Rajapaksa was sworn in as the new Prime Minister of Sri Lanka on November 21, 2019. He was administered the oath of the office by incumbent President Gotabaya Rajapksa and his younger brother.

Mahinda Rajapaksa took oath as the new Prime Minister of Sri Lanka after Ranil Wickremesinghe resigned from his post after his presidential election defeat. A 15-member cabinet is also expected to be sworn in on November 22.

Speaking after his swearing-in ceremony, Mahinda Rajapaksa said that he was honoured to have taken the oath as Sri Lanka’s new Prime Minister. He said that he was looking to take Sri Lanka forward with a new vision. 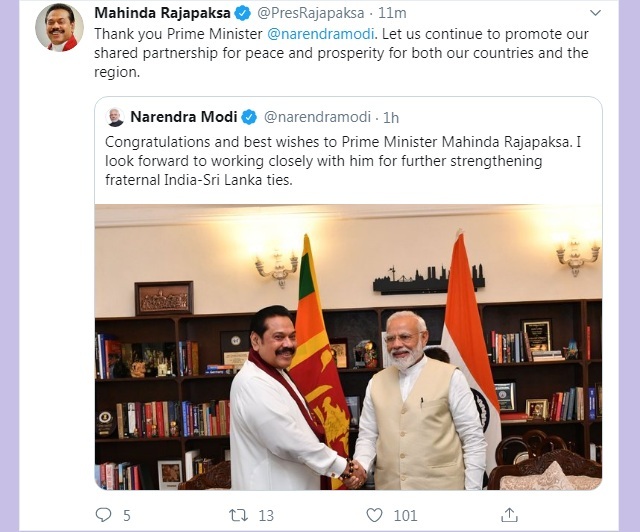 Why did Ranil Wickremsinghe resign?

Prime Minister Ranil Wickremesinghe formally resigned from his post on November 20 after his party suffered a huge defeat in the recently concluded Sri Lankan Presidential Elections 2019.

Though Ranil Wickremesinghe's government still has a majority in the Parliament, he decided to respect the mandate and pave way for the formation of a minority government helmed by the Rajapaksas.

The new Sri Lankan President Gotabhaya Rajapaksa officially named his elder brother and former President Mahinda Rajapaksa as the new prime minister on November 20. This would be the first time that Sri Lanka would be helmed by two brothers.

Mahinda Rajapaksa will helm the caretaker government till the parliamentary elections take place. Ranil Wickremesinghe had come to power in August 2015 for a period of five years. As per Sri Lankan constitution, the parliament cannot be dissolved before March 2020, six months before the term is scheduled to end unless two-third of its members pass a resolution for the same.

The United National Party has already notified the speaker of the parliament to name Ranil Wickremesinghe as the leader of the opposition.

Mahinda Rajapaksa formerly served as the President of Sri Lanka for two terms from 2005 to 2015, becoming South Asia’s longest-serving leader. He was barred from contesting elections again due to the two-term Presidential limit. This is the first time in Sri Lankan politics that the sitting President and Prime Minister did not run for the Presidential elections.

Both Mahinda Rajapaksa and Gotabaya Rajapaksa are largely credited for bringing an end to the decades-long civil war in Sri Lanka by brutally crushing the Liberation Tigers of Tamil Eelam. Their two other brothers, Basil and Chamal Rajapaksa, are also active in politics. The eldest brother Chamal was the speaker of parliament during Mahinda Rajapaksa’s Presidency.

Ranil Wickremesinghe had come to power in 2015 with a promise to prosecute all the members of the outgoing Mahinda Rajapaksa’ government who were accused of corruption and other crimes including murder. However, he failed to live up to his promises.

In fact, his turbulent power struggle with former President Maithripala Sirisena, whom his party had supported in 2015, plunged Sri Lanka into a major constitutional crisis in 2018. Following this, the UNP, which had not fielded its candidate in both 2010 and 2015 Presidential elections decided to contest the 2019 elections on their own and nominated the party’s deputy leader Sajith Premadasa for the post.