The government has made biometric identification Aadhaar mandatory for all post office deposits, Public Provident Fund, National Savings Certificate scheme and Kisan Vikas Patra. The move has been made to weed out benami deals and black money. 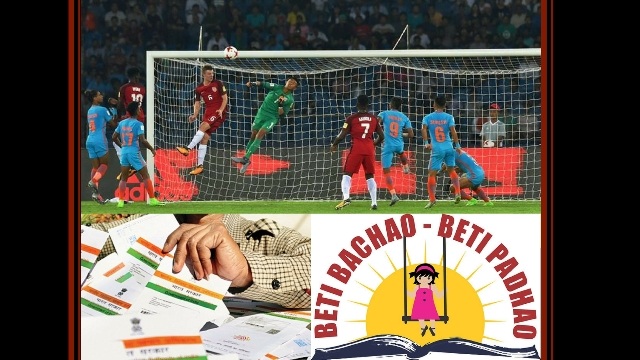 According to the gazette notification issued by the Finance Ministry, existing depositors who have not provided Aadhaar number at the time of application for such deposits would have to submit their Aadhaar number to the post office savings bank or deposit office concerned on or before 31 December 2017.

The government has insisted on providing Aadhaar for bank deposits, obtaining mobile phone and several other utilities to weed out benami deals and black money.

The Union Government announced that there has been an improvement in sex ratio at birth in 104 districts selected for the Beti Bachao, Beti Padhao (BBBP) scheme.

According to RK Shrivastava, Secretary, Women and Child Development (WCD) Ministry, out of the total 161 districts where the programme is being implemented, an increasing trend in Sex Ratio at Birth (SRB) is visible in 104 districts.

The BBBP scheme mainly aims at checking female infanticide and educating the girl child. The WCD ministry now plans to extend this programme to all the districts of the country with the focus on the 56 of the total 161 districts that have shown a decline in SRB.

In their opening encounter of the FIFA Under-17 World Cup, India lost to the United States by three goals in the Group A match played at the Jawaharlal Nehru stadium in New Delhi on 6 October 2017.

In the tournament opener, two-time champions Ghana began their campaign with a 1-0 victory over Colombia. India would now be facing Colombia in their second Group A match in Delhi on 9 October.

The tournament’s Goa leg would commence on 7 October at Pandit Jawaharlal Nehru Stadium in Fatorda near Madgaon. In the two Group C games, Germany would be first taking on Costa Rica, while Iran would play against Guinea.