NASA shares image of galaxy cluster Abell 370: All You Need to Know

The Abell 370 galaxy cluster is located 4.9 billion light-years away from the Earth in the constellation Cetus. 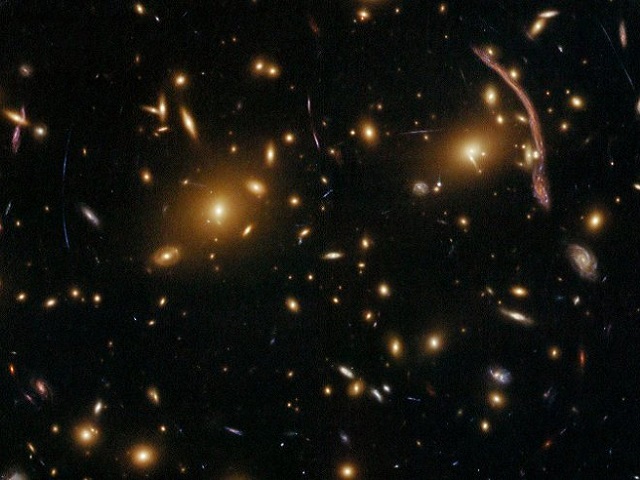 The National Aeronautics and Space Administration shared a stunning picture of the massive galaxy cluster- Abell 370 on its social media account on January 19, 2021. The picture is a first-of-its-kind, as it shows a huge cluster of galaxies.

NASA's Hubble Space Telescope shared the image on its Twitter and Instagram accounts with a post that read, "Smears and streaks of light cover this Hubble Classic image of galaxy cluster Abell 370. The huge gravity of this cluster causes light to bend as it passes through, distorting our view of galaxies behind Abell 370, creating the warped shapes seen here."

The Abell 370 galaxy cluster is located 4.9 billion light-years away from the Earth in the constellation Cetus.

• NASA explained that the weird shapes in the image are the warped appearances of galaxies that are not part of the cluster but lie far beyond it. These far-off galaxies look distorted due to the immense gravity of the galaxy cluster.

• According to Albert Einstein's general theory of relativity, gravity can change the course of not just physical objects but light as well. Going by this, as light from a distant galaxy travels toward us, through the Abell 370 galaxy cluster, the cluster's gravitational force bends and magnifies the distant galaxy's light like a lens. This is called gravitational lensing.

• Abell 370 is one of the first galaxy clusters which showed effects of gravitational lensing.

• This particular image has been captured by Hubble's Advanced Camera for Surveys. It uncovers far more detail in the numerous streaks and arcs scattered throughout Abell 370 than telescopes on the ground could provide.

• Johan Richard of Durham University in the United Kingdom and his colleagues studied Hubble's images of Abell 370 and identified ten distant galaxies lensed by the cluster, including six that hadn't been spotted before.

• Richard and his team analyzed Hubble's observations of the lensed galaxies and found that Abell 370 contains two large, separate clumps of dark matter.

• This suggests that Abell 370 is a product of merging of two smaller galaxy clusters.

The Abell 370 galaxy cluster is reported to be home to hundreds of galaxies. It is named after George Abell, who catalogued the galaxy.

The galaxy contains so much mass that it warps the space around it, which magnifies and bends the light coming from cosmic objects located behind it.