Indian Jewellers will be allowed to sell hallmarked gold artifacts made of 14, 18 and 22 carats gold only.

Gold Hallmarking in News: Union Consumer Minister Ram Vilas Paswan announced on January 14, 2020, that Indian jewellers will be allowed to sell hallmarked gold artifacts made of 14, 18 and 22-carat gold only. He said that it will become mandatory for all jewellers in the country but they will be given one year to get mandatory hallmark.

The notification regarding this rule of consumer affairs will be issued on January 16, which will provide mandatory hallmarking of gold jewellery from January 15, 2021. At present, gold hallmarking is voluntary. 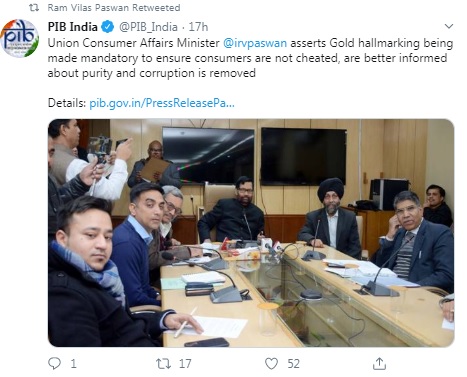 • Union Consumer Minister Ram Vilas Paswan said that there is a provision of fine and imprisonment for one year for violating this rule.
• He said that jewellery vendors have been given one year to arrange registration and compulsory hallmarking in the Bureau of Indian Standards (BIS).
• Paswan said that currently hallmarking is available in ten categories. However, from next year, hallmarked gold will be available in three grades of 14 carats, 18 carats and 22 carats only.
• Minister also announced that the government aims to open hallmarking centers in all districts across the country.

What is Gold Hallmarking?

Gold hallmarking is a purity certification by the Bureau of Indian Standards (BIS). The BIS symbol certifies that the jewellery has BIS standards.  Therefore, one must ensure that jewellery has a BIS hallmark. It has a triangular mark as a purity certification of gold. Apart from that, the year of manufacturing of the product and the logo of the producer are also there.

There are several assessments and hallmarking centers in 234 district locations in India. However, only 28,849 jewellery vendors have BIS registration. Hallmarking will curb frauds and fake gold jewellery. As per the data released by the World Gold Council (WGC) India’s gold import in the first nine months of 2019 was 496.11 tonnes. It was 523.9 tonne in the year 2018. On the other hand, according to the World Trade Organization's global trade rules, member countries have to notify their quality control order.