The CRISPR/Cas9 genetic scissors is a revolutionary technology that has been contributing to new cancer therapies. 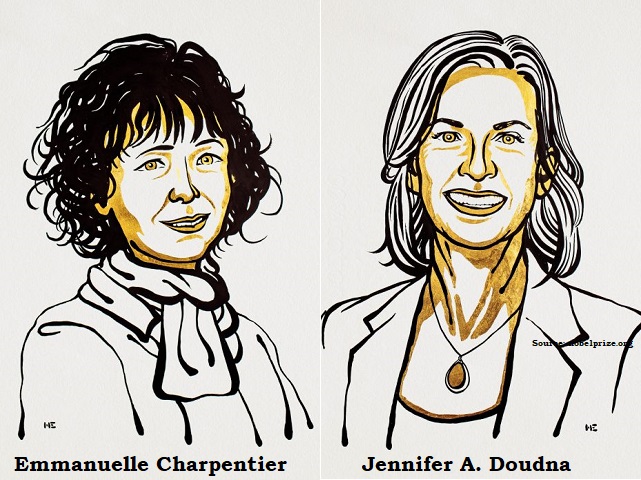 The Nobel Prize in Chemistry 2020 has been jointly awarded to Emmanuelle Charpentier and Jennifer A. Doudna for the development of a revolutionary tool for genome editing.

The Nobel Prize winners have jointly discovered CRISPR/Cas9 genetic scissors, which is one of gene technology’s sharpest tools. Using these scissors, researchers will be able to edit or change the DNA of animals, plants and other microorganisms with extremely high precision.

The CRISPR/Cas9 genetic scissors is a revolutionary technology that have had a huge impact on the life sciences and is contributing to new cancer therapies. It may help pave the way towards curing inherited diseases.

BREAKING NEWS:
The 2020 #NobelPrize in Chemistry has been awarded to Emmanuelle Charpentier and Jennifer A. Doudna “for the development of a method for genome editing.” pic.twitter.com/CrsnEuSwGD

Emmanuelle Charpentier was born in Juvisy-sur-Orge, France in 1968. She did her Ph.D. from Institut Pasteur, Paris, France in 1995. She is currently serving as the Director of the Max Planck Unit for the Science of Pathogens, Berlin, Germany.

About Jennifer A. Doudna

Jennifer A. Doudna was born in Washington DC, USA in 1964. She completed her Ph.D. in 1989 from Harvard Medical School, Boston, USA. She is currently serving as a Professor at the University of California, Berkeley, USA and Investigator at Howard Hughes Medical Institute.

CRISPR/Cas9 genetic scissors: Why is their discovery important?

Researchers often need to modify genes in cells to find out about life’s inner workings but this was a very time-consuming and difficult process, which was sometimes also impossible.

However, the discovery of CRISPR/Cas9 genetic scissors has changed that, as using the genetic scissors, it is now possible to change the code of life over the course of a few weeks.