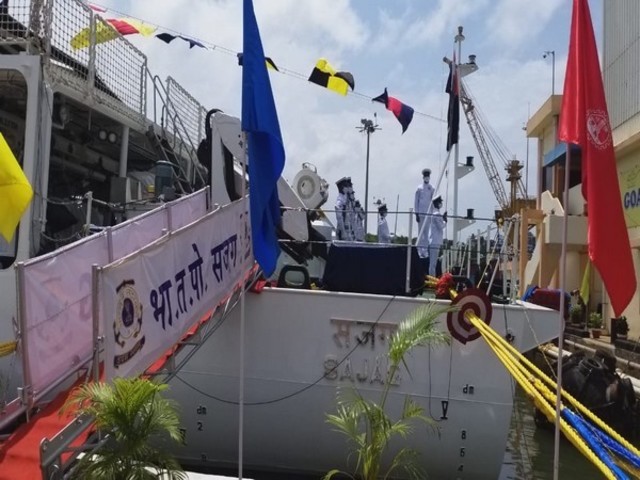 Sajag, meaning ‘vigilant’, is an Indian Coast Guard ship that reflects the ‘Ready, Relevant and Responsive’ will and commitment towards the maritime interest of the nation.

Sajag has been designed and built in India by Goa Shipyard Limited. It harbors advanced technology, communication equipment, navigation, machinery, and sensors.

Two 9100 KW diesel engines propel the ship to reach a maximum speed of 26 knots. The ship displaces around 2,350 tons (GRT).

The ship is built with an endurance of 6,000 nm at an economical speed. The ship equipped with a modern system and technology is capable to perform tasks to fulfill the Coast Guard charter.

Deputy Inspector General Sanjay Negi will command the ICG ship Sajag along with 12 officers and 99 men.

Sajag will be based at Porbandar along with the Coast Guard fleet. The ship will be used extensively for EEZ surveillance and duties mentioned by the Coast Guard charter.

Sajag will boost the operational capability of the Indian Coast Guard to perform various maritime tasks and uplift the maritime protection of the Western coastline of India.

Currently, ICG houses a fleet of 62 aircraft and 157 ships. While 16 Advance Light Helicopters are under building stage at HAL, Bengaluru and 34 surface platforms are under construction at different shipyards.