Climate change priority for both India and Sweden: PM Modi at virtual summit with Swedish counterpart 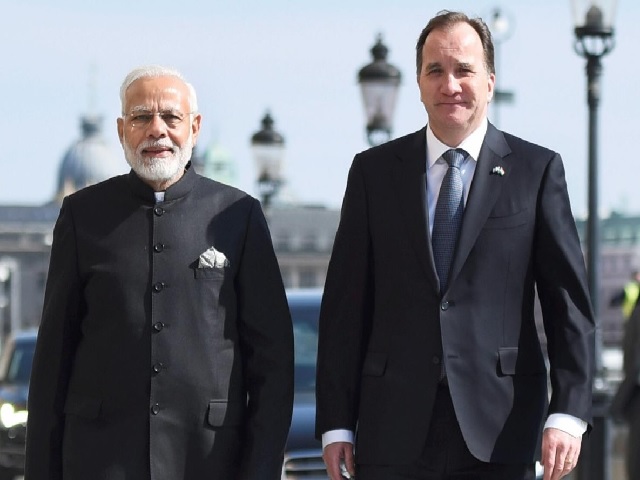 PM Modi held a virtual summit with the Prime Minister of Sweden Stefan Lofven on March 5, 2021. Both the leaders exchanged views on the global and regional issues and also discussed bilateral relations between the two nations.

According to a statement by the Ministry of External Affairs, this was the 5th interaction between the two leaders since 2015. Prime Minister Modi had visited Stockholm for the First India Nordic Summit in April 2018. While the Prime Minister of Sweden had visited India for the special Make in India week in February 2016.

The Ministry further mentioned that in September 2015, the leaders of India and Sweden had met on the sidelines of the United Nations General Assembly. In April 2020, they had a telephonic conversation to discuss the situation of the COVID-19 pandemic.

Prime Minister Modi during the virtual summit with the Prime Minister of Sweden expressed solidarity with the people of Sweden, over a violent attack that took place in Sweden on March 3. He added that India hopes that the injured will recover soon.  As many as 8 people were injured in a knife attack in Southern Sweden.

I express solidarity to the people of Sweden, on behalf of all Indian citizens, over the violent attack that took place the day before yesterday in Sweden. We hope that the injured recover soon: PM Narendra Modi at the virtual summit with Swedish PM Stefan Löfven pic.twitter.com/ZJQ8fs15l5

PM Modi while addressing the summit informed that India has so far provided 'Made in India' vaccines to around 50 countries and is further committed to supplying the vaccines to even more countries in the days to come.

We have provided 'Made in India' vaccines to around 50 countries so far. We are committed to supplying vaccines to even more countries in the days to come: PM Narendra Modi at the virtual summit with Swedish PM Stefan Löfven pic.twitter.com/LoU2DGxReU

Climate change priority for both India and Sweden:

PM Modi during the summit stated that 'cooperation', 'coordination' and 'collaboration' have become more important in the present scenario between the like-minded countries. Human rights, the shared value of democracy, equality, rule of law, justice will strengthen our relations and mutual cooperation.

Prime Minister also added that the important issue of climate change is a priority for both India and Sweden and the Indian government will like to work with Sweden on this. He further invited the Swedish government to strengthen ties in technology, innovation, start-ups, investment, and research.

Both the countries have warm and friendly relations based on the shared values of freedom, democracy, rules-based international order, and pluralism.

India and Sweden also share close cooperation in the areas of innovation, trade, and investment, research and development, and science and technology.