The Light House Projects will be undertaken at Rajkot in Gujarat, Lucknow in Uttar Pradesh, Indore in Madhya Pradesh, Ranchi in Jharkhand, Chennai in Tamil Nadu and Agartala in Tripura. 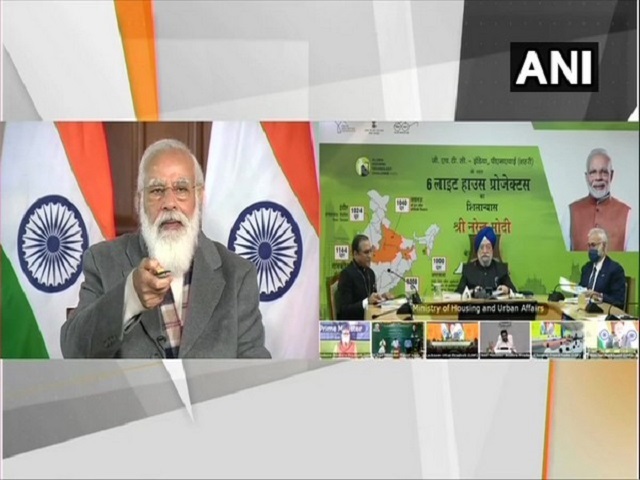 The projects are being undertaken under the Global Housing Technology Challenge (GHTC)-India in six states across India including - Uttar Pradesh, Gujarat, Madhya Pradesh, Tamil Nadu, Jharkhand and Tripura. The Chief Ministers of all six states took part in the foundation laying ceremony.

Speaking during the inauguration of the Light House Projects, PM Modi said that these six projects will give a new direction to housing projects in the country and has strengthened cooperative federalism.

These six projects will give a new direction to housing projects in the country. It has strengthened cooperative federalism: PM Narendra Modi at the launch of Light House Projects across six states pic.twitter.com/vhED3qrKbU

Andhra Pradesh Chief Minister YS Jagan Mohan Reddy stated that the Prime Minister has envisioned Housing for all by 2022 and by then, the nation will complete 75 years of independence. He stated that the program is of particular relevance to the state of Andhra Pradesh, as it is vulnerable to natural disasters like cyclones and floods.

Jharkhand Chief Minister Hemant Soren also spoke on the occasion saying that Jharkhand is a backward state and under Light House Project, 1,008 houses will be constructed in the state with the help of the centre and state government. He further said that people living in the state have low incomes, as most are labourers and hence, the government should further strategise on how to minimise their financial burden.

Jharkhand is a backward state & under Light House Project, 1,008 houses will be constructed here with the help of Central&State govt. People living here have low incomes as most of them are labourers. We should strategise how we can minimise their financial burden: Jharkhand CM pic.twitter.com/KMwzZe7Oj2

•The Light House Projects will showcase the best use of new-age alternate global technologies, processes and materials in the construction sector at such a large scale for the first time in the country.

•The houses will be constructed under GHTC-India, which aims to provide an ecosystem for holistic adoption of innovative technologies in the housing construction sector.

•The Light House Projects will be undertaken at Rajkot in Gujarat, Lucknow in Uttar Pradesh, Indore in Madhya Pradesh, Ranchi in Jharkhand, Chennai in Tamil Nadu and Agartala in Tripura.

•The project will comprise around 1000 houses at each location along with allied infrastructure facilities.

•It will mainly aim to deliver ready to live houses at an fastened pace within twelve months.

•These houses will be more economical, sustainable, durable and of high quality in comparison to the conventional brick and mortar construction.

•A variety of different technologies will be used in the construction of these LHPs, some of the which are listed below:

•The LHPs aim to serve as live laboratories for facilitating transfer of technology to the field and its further replication.

•The process includes proper planning, design, construction practices, production of components and testing for both faculty and students of IITs, NITs, other Engineering and architecture colleges and builders and professionals of private and public sectors.

Besides this, Prime Minister Modi also announced the winners under Affordable Sustainable Housing Accelerators (ASHA)- India on the occasion and conferred the annual awards for excellence in implementation of Pradhan Mantri Awas Yojana - Urban (PMAY-U) Mission.

Speaking on the same, the Prime Minister said that ASHA-India program is being run in the country to promote research and startups in modern housing technology.

Affordable Sustainable Housing Accelerators -India (ASHA-India) program is being run in the country to promote research and startups in modern housing technology: PM Narendra Modi at the launch of Light House Projects across six states pic.twitter.com/8fCZHZCpNF

•Under the initiative, five ASHA-India Centers have been set up for providing incubation and acceleration support.

•The Prime Minister will announce the names of the potential technology winners under acceleration support.

•The technologies, processes and materials identified through this initiative will provide a major fillip to young creative minds, start-ups, innovators and entrepreneurs.

•On the other hand, the Pradhan Mantri Awas Yojana - Urban (PMAY-U) Mission has been designed to achieve the vision of Housing For All by 2022.

•The annual awards for excellence in implementation of PMAY-Urban were introduced by the Ministry of Housing and Urban Affairs to recognize the outstanding contribution by States, UTs, Urban Local Bodies and beneficiaries. The 2019 winners will be awarded during the event.