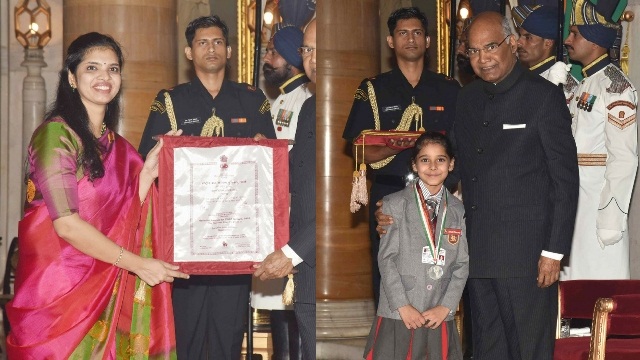 The President of India, Ram Nath Kovind, gave away the National Child Awards at Rashtrapati Bhavan, New Delhi on 14 November 2017, on the occasion of Children’s Day.

- National Child Awards for Exceptional Achievement give recognition to children with exceptional abilities and outstanding achievements in the fields of innovation, scholastic achievements, sports, arts, culture, social service and music.

- National Awards for Child Welfare recognise the outstanding work of institutions and individuals in the field of child development and welfare.

- Rajiv Gandhi Manav Seva Awards are conferred to individuals for their outstanding contribution towards service for children, including children with disabilities.

• This year, the President honoured 16 children with the National Child Awards, among whom one child received a gold medal and 15 children were given silver.

• The gold medal was awarded to the child with the most outstanding achievement. The child was also given a cash prize of Rs 20000 and a certificate/citation.

• The silver medal awardees were honoured with a cash prize of Rs 10000 and a certificate/citation.

• The gold and silver medal awardees were also given a book voucher worth Rs 10,000 and Rs 3, 000 respectively.

• The eligibility criteria for the awards include that the children should be aged between 5 to 18 years.

The awards were given to the following 16 children :