The President’s colour is the highest honour bestowed upon any Indian military unit.

The President’s colour was presented to INS Shivaji during a ceremonial parade comprising 130 officers and 630 sailors including 150 Guard of Honour. INS Shivaji is commanded by Commodore Ravnish Seth.

The honour was received by Nishan Adhikari on behalf of the military unit. On the occasion, a special cover marking INS Shivaji’s platinum jubilee was also released by the President. 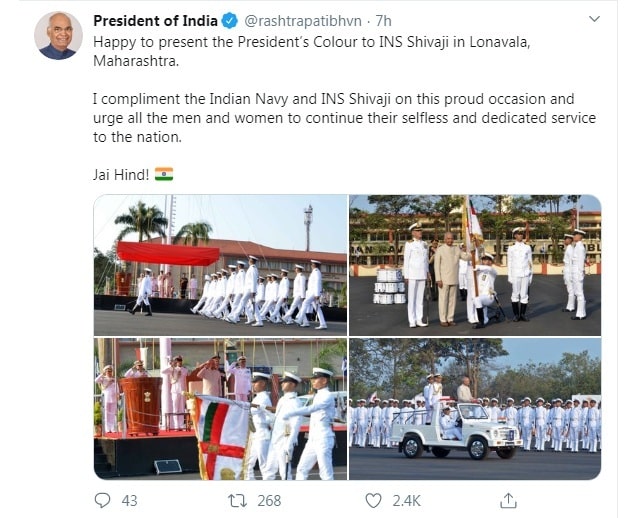 The conferral of the President's Colour marks an extremely significant milestone in the history of INS Shivaji. INS Shivaji has served the Indian Navy for 75 years. The unit has largely contributed in training modern-day Marine Engineers.

The President’s Colour will now be proudly displayed and carried at all ceremonial parades at INS Shivaji to inspire all future Marine Engineers of the Indian Navy.

• The unit conducts over 5000 training courses for both officers and sailors and has an annual training for more than 2800 officers and 7800 sailors.

• INS Shivaji also imparts training to personnel from 20 countries across the world. On average, the unit trains about 250 international personnel.

INS Shivaji is commemorating its 75 years of its service to the Indian Navy this month. The celebrations for its platinum jubilee had begun from February 15, 2019.

Since its establishment, INS Shivaji has trained over 2 lakh officers and sailors, both Indian and foreign nationals.

INS Shivaji motto: Karmasu Kaushalam, which means imbibing the concept of skill at work in all aspects of human endeavour.