Delhi Pollution: All Delhi schools to be shut till November 15

Delhi Pollution: Delhi schools will remain shut till November 15 due to rise in pollution levels. 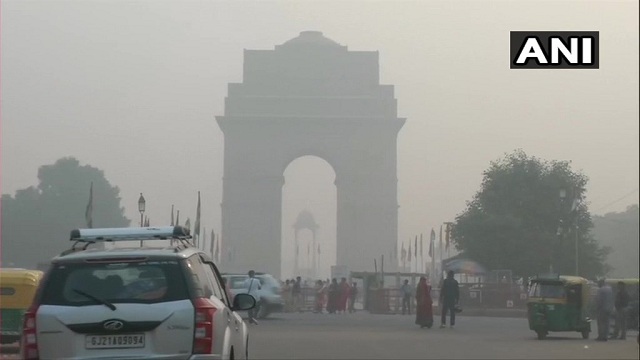 Delhi Air Pollution: All Delhi schools will remain shut till November 15 due to rise in pollution levels. Deputy Delhi CM Manish Sisodia made the announcement through his twitter account.

Manish Sisodia tweeted saying that the Delhi Government has decided to shut all government and private schools till November 15, in the view of deteriorating air quality in the capital as a result of increase in stubble burning in northern India.

Delhi pollution level is yet again moving towards the 'severe' category. All outdoor activities were suspended in the schools till November 13.

The Delhi government is also contemplating on extending the odd-even scheme, given the current worsening pollution scenario in the capital. The odd-even scheme was initially implemented for 12 days from November 4 till November 15, 2019.

The Supreme Court  expressing alarm on severe air pollution level in Delhi-NCR directed an immediate halt to stubble burning in Punjab, Haryana, and UP and banned all construction and demolition activities in Delhi-NCR till further orders on November 4, 2019.

Supreme Court Judge Arun Mishra stated that Delhi is choking every year and we are not able to do anything. “Farmers cannot kill others for their own livelihood. We have no sympathy for farmers if they keep burning crops,” said Justice Mishra with grave concern and added saying, “this cannot happen in a civilised country. The right to life is the most important. We want to burn our crop and let others die' we can't live like this.”

The SC made the statements while taking up the issue of pollution in the national capital and other parts of North India.

• SC questioned Delhi Government’s odd-even scheme and asked it to file a response citing data based on the previous exercise, on stopping of private cars as against allowing 2&3 wheelers and taxis.

• SC banned demolition and construction activities in Delhi-NCR. The local administration will be responsible and liable if any such activities are found to be taking place.

• SC directed Delhi, Punjab, Haryana and UP to ensure no power cuts take place in the states, to ensure no diesel generators are used.

• SC also summoned the Chief Secretaries of Haryana, Punjab and UP to be present in the court on Wednesday to explain inaction on curbing of stubble burning.

• The Supreme Court ordered an immediate halt to stubble burning. The top court stated that the entire police machinery and local administration should be deployed to ensure no crop burning takes place and the entire administration will be held responsible for any such incident.

• The apex court directed the states of Punjab, Haryana, and UP to explain why they should not be asked to pay compensation on the principle of polluter pays, given that they have failed to prevent stubble burning.

• The court questioned the states of Punjab and Haryana on the solution to stubble burning, pointing out that it is not just Delhi but the two states are also badly affected.

• Supreme Court Judge, Justice Arun Mishra stated, “Scientifically speaking we are all losing precious years of our life. The question is how to extinguish these fires?”

• The Judge further questioned the Delhi Counsel on the impact of the odd-even scheme, stating that the solution to the pollution level is single-person-use vehicles against mass-use vehicles but the Delhi Government has only added some 100 buses to public transport.

• Justice Mishra noted that the Delhi Government has stopped private cars, but autos and taxis will ply and they will run more and pollute equally. The Judge observed that the people in the national capital don't even want to use Metros. The Metro to the Airport runs empty most of the time.

Has the crop stubble burning stopped?

Additional Solicitor General of India, Atmaram Nadkarni noted that the fires have been extinguished in Punjab and Haryana but the situation now requires patrolling to ensure no more fires take place. The Joint Secretary of Environment Ministry announced awards for those, who report instances of fire. However, the Supreme Court questioned this move, asking that ‘can this be left on informers?”

The Environment Pollution (Prevention & Control) Authority has declared a public health emergency in Delhi stating that the air pollution level has reached hazardous in the national capital and it will have an adverse impact on the health of the citizens, especially the children.

The EPCA stated that the air quality in Delhi NCR is currently at 'severe+ level' and prohibited all construction activities in Delhi NCR till the morning of November 5, 2019. The EPCA also imposed a blanket ban on firecrackers for the entire winter period.

Delhi Chief Minister Arvind Kejriwal directed that all schools in Delhi will be shut till November 5. The air quality in most parts of Delhi-NCR crossed the 500 mark in PM10 levels, which is 'severe+' or the emergency category. The national capital and its surrounding areas have been completely enveloped by a choking smog. 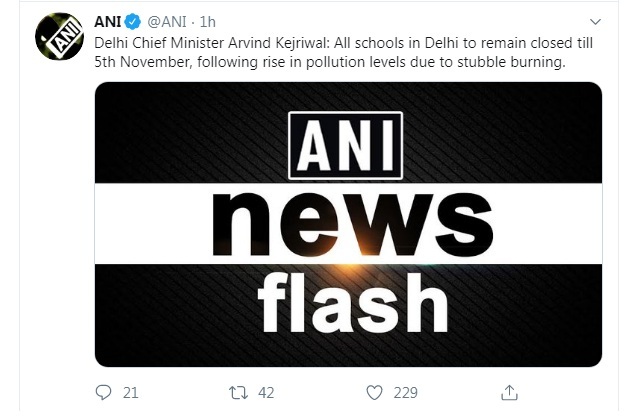 Ever since the conclusion of the Diwali festival, Delhi and its surrounding areas have been struggling with rising air pollution levels.

This comes despite the government imposing a ban on bursting of all non-green crackers this Diwali. The pollution level has touched the severe category in the national capital for the first time since January this year. 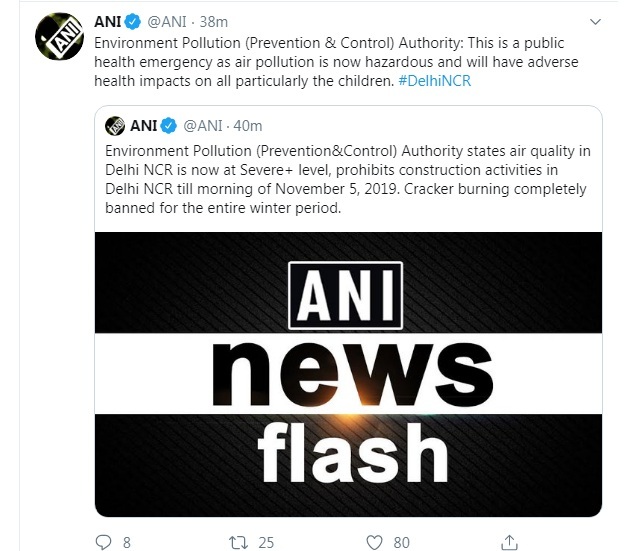 If the air quality will continue to remain in the ‘severe plus’ category for more than 48 hours, then, other emergency measures will be put to action to combat it, such as the odd-even scheme and banning the entry of trucks into the capital.

Delhi CM Arvind Kejriwal described the city as a "gas chamber" while distributing masks to school children. He also held the neighbouring states of Haryana and Punjab responsible for the rising air pollution levels. At this time of the year, thousands of farmers burn their crop stubble in the state, the smoke of which is carried across northern India. 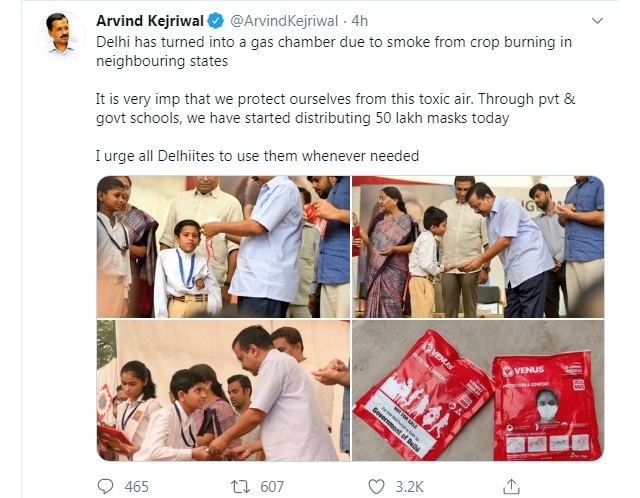 Union Environment Minister Prakash Javadekar, on the other hand, said that the blame game will not solve the problem. “Providing relief to people from pollution is everyone's responsibility. I appeal that instead of blaming Haryana & Punjab and blaming each other, all 5 states should sit together and discuss ways to mitigate pollution,” Javadekar said.

EPCA is the Environment Pollution (Prevention & Control) Authority. The body was appointed by the Supreme Court of India to improve air quality in Delhi.

PM 10 is a particulate matter with a diameter of 10 micrometers or less, which comprise a mixture of smoke, soot, dust water, rubber, metals, nitrates and sulphates.  The particulate matter is formed due to pollen and combustion activities such as motor vehicles and industrial processes.

PM10 particles are so small that these are called fine particles. Exposure to such particles can have several adverse impacts on health such as they can cause cough, asthma attacks, bronchitis, high blood pressure and even heart attack and strokes.

PM 2.5 refers to particles that have a diameter of 2.5 micrometers or less. PM 2.5 particles are more harmful, as they are extremely small and light. These particles stay longer in the air, in comparison to the heavier particles hence, they are known to cause more damage to the body.

The particles can cause chronic diseases such as asthma, bronchitis, other major respiratory problems and even heart attack. While the larger particulate matter such as PM10 can be pushed out of the body through sneezing and coughing and swallowing, PM 2.5 can enter into the lungs and travel deep to the alveoli and stay there for a long time.