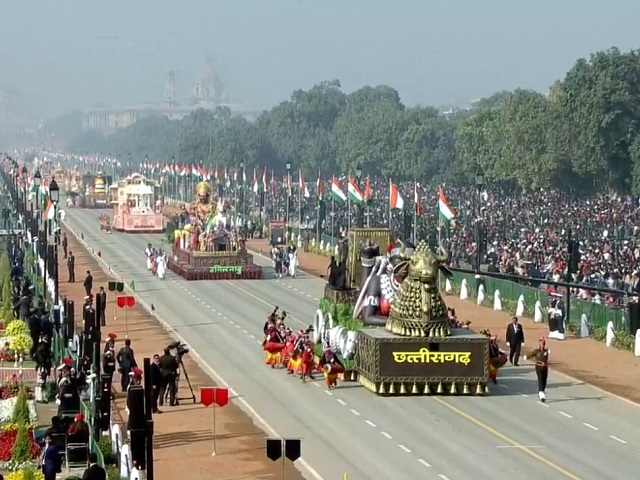 Republic Day 2020: India celebrated its 71st Republic Day on January 26, 2020. This year's Republic Day was unique for India in many different ways as compared to the previous years. At the Republic Day Parade 2020, India showcased its strength, diversity and pride.

Starting from the military might that was displayed through indigenously developed artillery gun system 'Dhanush' or with first woman parade adjutant for the Republic Day with Captain Tania Shergill leading the parade; there were many ‘firsts’ that marked India’s 71st Republic Day Celebrations.

Here is the complete coverage of the Republic Day Parade along with key highlights and unique events. Get to know all the interesting facts and figures about India’s Republic Day 2020 celebrations here.

Brazilian President Jair Bolsonaro was the chief guest at India's 71st Republic Day Parade on January 26.  The President is on a 4-day state visit to India from January 24-27, 2020. Bolsonaro is accompanied by a large contingent including 8 ministers, 4 MPs and officials along with a large business delegation. 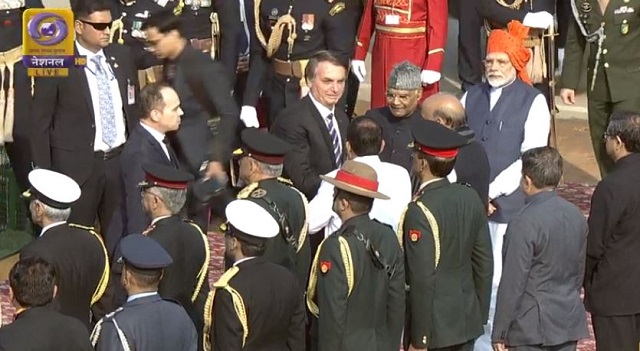 Captain Tanya Shergil, a fourth generation Army Officer led an all-male marching contingent of the Indian Army Corps of Signals. The motto of the Corps is “Teevra Chaukas”. 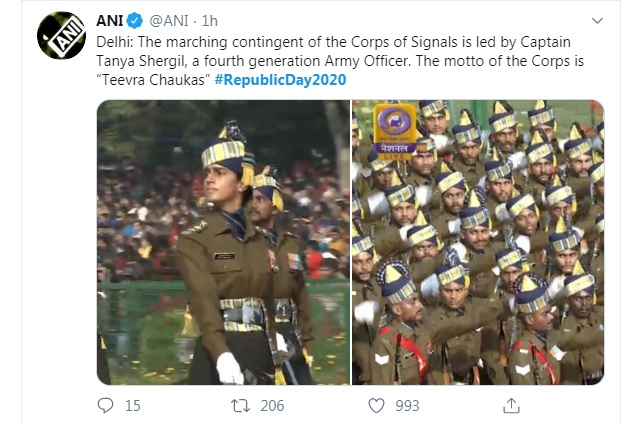 Continuing the theme of women power, the day also saw an all-woman biker contingent of the Central Reserve Police Force (CRPF) make its debut as a part of the 71st Republic Day Parade. The contingent was commanded by Inspector Seema Nag, who is posted with the Rapid Action Force (RAF). A 65-member team consisting of women bikers exhibited its acrobatic skills on motorcycles as a part of the CRPF contingent. An all-women biker squad also performed nine daring acts on motorcycles including forming a human pyramid on multiple motorcycles.

Another key highlight of the 71st Republic Day Parade was inclusion of the Dhanush artillery gun for the first time. The Dhanush Artillery Guns are being produced by Ordnance Factory Board under the flagship project of Make in India’. Dhanush is an indigenous long-range artillery developed in-house by OFB. The gun fires 155 mm x 45mm calibre on the lines of Bofors, but has better rate of fire with active strike range of 38 kilometers. 81% of the components are developed or sourced indigenously. Apart from Dhanush, the parade also saw K9 Vajra, another indigenous gun system inducted in the Indian Army, displayed at Rajpath.

The Indian Air Force (IAF) also participated in the Republic Day Parade with its tableau showcasing scaled system of the five-fighter system. The models on display during Parade included Rafale Fighter Jet and Tejas Aircraft. Apart from this, the fly-past, which is the highlight of the parade, saw the participation of the newly inducted Apache and Chinook heavy lift helicopters for the first time. The Republic Day Fly Past consisted of 41 aircrafts of the IAF including 16 fighter jets, 10 transport aircrafts and 4 Helicopters of the Army Aviation Wing.

India also showcased its state-of-the-art, Anti-Satellite (ASAT) weapon system as a part of the parade. Last year, India successfully conducted an ASAT Test using an interceptor missile against a live orbiting satellite in the Low Earth Orbit in March. 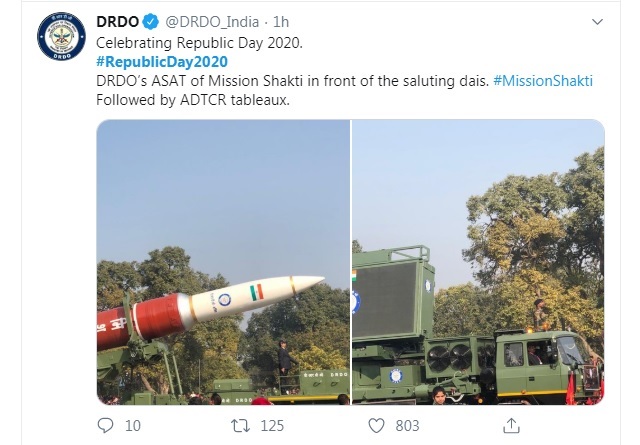 The Republic Day Parade 2020 included a total of 22 tableaux including 16 from various states and union territories and remaining 6 from various ministries, departments and the National Disaster Response Force

The tableaux presented as part of the Republic Day Parade showcase India’s strength in its ‘Unity in Diversity’. These presentations are designed by respective states and presented as a testimony of India’s diverse cultural heritage and history. Some of the key tableaux and their themes that will be a  part of India’s 71st Republic Day are as follows:

Gujarat presented a tableau based on the unique theme of Rani ki Vav - Jal Mandir located in Patan city. The Jal Mandir which translates to Queen''s Stepwell, is a unique architectural marvel that stands as testimony to ancient construction work and craftsmanship. Built in 1083 by Rani Udayamati in memory of her husband King Bhimdev-I, son of Mulraj, founder of the Solanki dynasty; Rani Ki Vav also holds the distinction of being a UNESCO World Heritage Site.

Punjab’s tableau for Republic Day parade was based on the theme of Sikhism founder Guru Nanak Dev’s teachings of three principles -- Kirat Karo, Naam Japo and Vand Chhako; which roughly translate to “earn livelihood by honest means, chant name of God and share fruits of labour’. The tableau presentation will showcase the ideology of Guru Nanak Ji and will be part of the yearlong celebrations  of his 550th birth anniversary.

The Republic Day tableau of Rajasthan was based on the theme of Jaali Jharokha, through which the state will showcase glory of heritage of buildings and sites of Jaipur city. The presentation highlighted the grand gateways, vibrant markets, glorious buildings as well as Tripolia Gate and Statue Circle that are key landmarks of Jaipur.

Jammu & Kashmir – 'Back to Village

Jammu and Kashmir, for the first time, participated in the Republic Day Parade as a Union Territory. The state’s tableau was based on theme of ''Back to Village'' programme, which was launched by the government to rehabilitate the displaced Kashmiri Pandits. 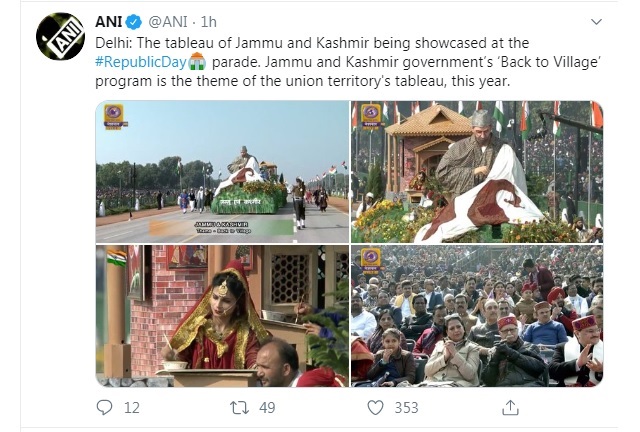 The National Disaster Response Force (NDRF) participated in the Republic Day for the first time this year. The NDRF's tableau was based on showcasing cutting-edge technology and instruments used by the force to carry out daring rescue operations in flood-hit and disaster hit areas. Last year’s Delhi's Anaj Mandi fire and NDRF’s efforts to contain it will also be exhibited as a part of the presentation.

Another highlight that was showcased as a part of the Republic Day Parade was the Finance Ministry’s tableau that was based on the theme of financial inclusion. The tableau presented India’s efforts to achieve financial inclusion, which have been recognized and commended by World Bank. As per the World Bank Data, due to India’s financial inclusion efforts, 55 percent of new accounts opened in the world are from India.

The Ministry of Commerce and Industries also presented its tableau based on the theme of 'Startups: Reach for the Sky'. The Startup India tableau was based on the lifecycle of a start-up while showcasing different stages of its development. The tableau consisted of a creative mind display at the front, Startup India Tree and end with highlights of different kinds of support given by the government to boost start-up ecosystem in India.