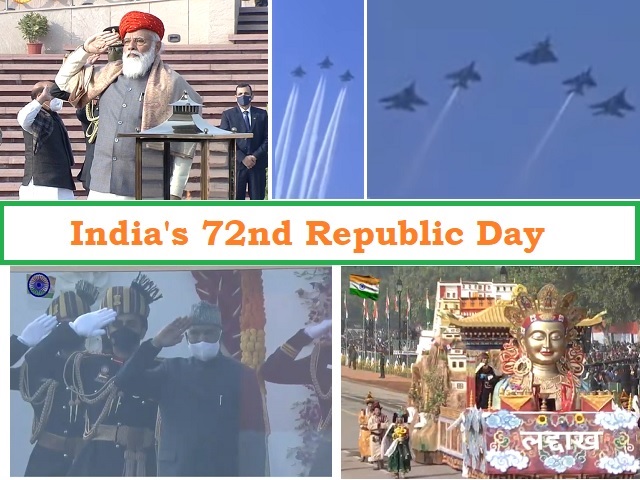 Republic Day 2021: India celebrated its 72nd Republic Day on January 26, 2021. The main parade was organised at Rajpath in New Delhi. Prime Minister Narendra Modi extended his greetings to the people on the occasion.

The Republic Day Parade ceremony commenced with Prime Minister Modi's visit to the National War Memorial where he paid tribute to the martyred soldiers by laying a wreath.

#RepublicDay: Prime Minister Narendra Modi leads the nation in paying tribute to the fallen soldiers by laying a wreath at the National War Memorial at the India Gate pic.twitter.com/mDX47YYVfr

The Prime Minister wore a special 'Paghdi' from Jamnagar on the occasion of the Republic Day. The first such 'Paghdi' was gifted to the PM by the royal family of Jamnagar, Gujarat.

Prime Minister Modi is wearing a special 'Paghdi' from Jamnagar, today. The first such 'Paghdi' was gifted to the PM by the royal family of Jamnagar, Gujarat. pic.twitter.com/7wRITqsC52

This year's Republic Day ceremony was different from past events due to the COVID-19 pandemic. The parade was held while following all necessary COVID-19 preventive protocols.

The parade route was shortened this time due to the COVID-19 pandemic. Though it began from the usual starting point at Vijay Chowk, it culminated at the National Stadium instead of the Red Fort.

The security was also tightened across the national capital due to the farmers' tractor rally protest against the three farm laws.

•India's military might, cultural diversity, social and economic progress was on display during the 72nd Republic Day celebrations at the majestic Rajpath in the national capital.

•As per tradition, the National Flag was unfurled followed by the National Anthem with a 21-gun salute. The parade commenced with President Ram Nath Kovind taking the salute.

The 21 Gun Salute is also presented during Independence Day and visits of foreign Heads of State. https://t.co/QKVGyhGBy1 pic.twitter.com/C55p7Ej6KE

•After the unfurling of National Flag, the winners of the highest gallantry awards such as Param Vir Chakra & the Ashok Chakra paraded down Rajpath.

#RepublicDay: Winners of the Param Vir Chakra & the Ashok Chakra parade down Rajpath

•Colonel Santosh Babu, the Commanding Officer of 16 Bihar, who martyred during action at Galwan valley clash along with 19 others, was decorated with a posthumous Maha Vir Chakra.

•The Indian Army was represented by a Mounted Column of 61 Cavalry, six marching contingents, seven mechanised columns and fly-past by Rudra and Dhruv Advanced Light Helicopters of the Army Aviation.

Captain Preeti Choudhary of 140 Air Defence Regiment (Self Propelled) leads upgraded Schilka Weapon system. She is the only woman contingent commander from Army at #RepublicDay parade 2021.

Delhi: Indian Navy's tableau with the theme of ‘Swarnim Vijay Varsh’ being displayed at #RepublicDay parade.

#RepublicDay: Flt Lt Bhawna Kanth, one of the first three female fighter pilots of the country, is part of the Indian Air Force tableau at the Republic Day parade pic.twitter.com/60JSBMVtvZ

The 122-member strong contingent is participating in the parade for the first time. pic.twitter.com/K4rym6bQQO

•Among other tableaux, the tableau of the Department of Biotechnology with the theme of 'Aatma-Nirbhar Bharat Abhiyan: COVID' depicted the process of COVID-19 Vaccine development through various processes.

Delhi: With the theme of 'Aatma-Nirbhar Bharat Abhiyan: COVID' the tableau of the Department of Biotechnology depicts the process of #COVID19 Vaccine development through various processes. #RepublicDay pic.twitter.com/xBqTeXIVxq

•The display of cultural tableaux had begun at the parade with Ladakh leading. Ladakh's tableau showcasing culture and communal harmony, festivals, art & architecture, music customs and languages was the first-ever tableau of the UT in the parade.

The display of cultural tableaux begins at #RepublicDay parade, with Ladakh leading. It's the first-ever tableau of the UT.

•The tableau of Uttar Pradesh was designed on the theme 'Ayodhya: Cultural Heritage of Uttar Pradesh' and it showcased Ayodhya and Ram mandir for the first-ever time. The forepart of the middle tableau showed Deepotsava of Ayodhya, in which millions of earthen lamps are lit.

The forepart of the middle tableau shows Deepotsava of Ayodhya, in which millions of earthen lamps are lit. #RepublicDay pic.twitter.com/FCnNOv7Z4n

•The Gujarat tableau displayed a replica of the Sun Temple at Modhera.

Republic Day: A replica of the Sun Temple at Modhera displayed on the #Gujarat tableau

The tableau depicts the Sabhamandap, part of the Sun Temple. It’s 52 pillars denote 52 weeks of a Solar year. pic.twitter.com/ga2jBMz75G

The end of the trailer shows Gurdwara Sri Rakab Ganj Sahib, the site of cremation of Guru Tegh Bahadur.#RepublicDay pic.twitter.com/LAY7WkeKHF

Dakotas were instrumental in airlifting troops into Kashmir Valley to repel invaders from across border in 1947. They played a significant role in Tangail airdrop leading to Bangladesh's libeartion pic.twitter.com/6LPxqhplsf

One Rafale with 2 Jaguar Deep penetration strike aircraft & 2 MiG-29 Air Superiority Fighters, in 'Eklavya’ formation are the next to fly past, at a height of 300m & speed of 780 Km/h.

The ‘Trinetra’ formation comprising of three Su-30MKIs - the three aircraft split outwards and upwards, forming a ‘Trishul in the Sky’. The formation is led by Gp Capt AK Misra. Commanding Officer of 15 Squadron with Sqn Ldr RC Kulkarni. #RepublicDay pic.twitter.com/82BwnSt8Xv

#RepublicDay parade culminates with a single Rafale aircraft flying at a speed of 900km/hr carrying out a ‘Vertical Charlie’. The aircraft is piloted by Gp Capt Harkirat Singh, Shaurya Chakra, Commanding Officer of 17 Squadron with Sqn Ldr Kislaykant. pic.twitter.com/ochv25VhkT

The Republic Day is celebrated on January 26 every year to commemorate the official coming into force of the Indian constitution. The Indian Constitution came into effect on January 26, 1950, officially declaring India as an independent Republic.

January 26th was chosen because it was on this day in 1930 when the Indian National Congress had made the call for Purna Swaraj, complete independence of the Indian union from the British colonial rule.