A team of researchers comprising researchers from India and Germany have discovered a 152 million-year-old fossil of an ichthyosaur - an extinct marine reptile in the Kutch region of Gujarat. 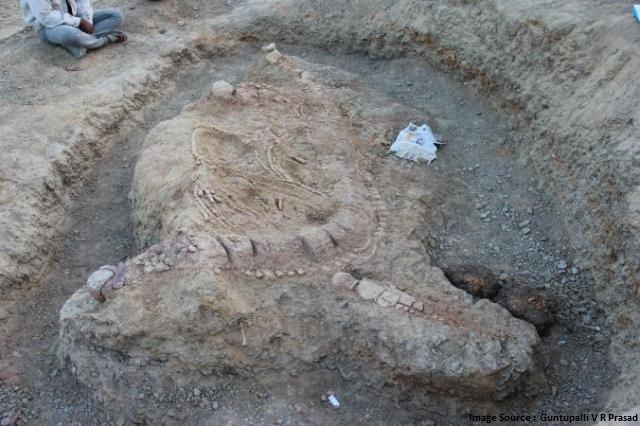 A team of researchers comprising researchers from India and Germany have discovered a 152 million-year-old fossil of an ichthyosaur - an extinct marine reptile in the Kutch region of Gujarat.

The fossil was found inside rocks from the Mesozoic Era, which ran between 252 and 66 million years ago. The findings have been published in the Plos One science journal.

• The researchers believe that the specimen belongs to Ophthalmosauridae family of ichthyosaurs that lived in oceans between 165 and 90 million years ago.

• This is the first time an ichthyosaur fossil has been discovered in India.

• The detailed examination of the fossil’s teeth suggested that it was a top-tier predator in its ecosystem and ate animals.

• The 5.5 m long specimen was almost complete, only parts of the skull and tail bones were found to be missing.

According to Prof Guntupalli VR Prasad, who led the study, the discovery is remarkable considering it is the first Jurassic ichthyosaur record from India and also because it throws light on the evolution and diversity of ichthyosaurs in the Indo-Madagascan region and India's biological connectivity with other continents in the Jurassic.

• The species are large marine reptiles, belonging to the order known as Ichthyosauria or Ichthyopterygia.

• They were particularly abundant in the later Triassic and early Jurassic periods, until they were replaced as the top aquatic predators by another marine reptilian group, the Plesiosauria, in the later Jurassic and Cretaceous periods.

• The species became extinct for unknown reasons in the late Cretaceous period, 90 million years ago.

• The existence of the species was first known to the world in the early 19th century when the first complete skeletons were found in England.

• In 1834, the order Ichthyosauria was named and in the late 19th century, many well-preserved ichthyosaur fossils were discovered in Germany, including soft-tissue remains.

Main features of the species

• They resemble a bit of both, modern fish and dolphins.

• Their limbs had been fully transformed into flippers, which sometimes contained a very large number of digits and phalanges. Some among the species also possessed a dorsal fin.

•  While their eyes were very large, their neck was short.

• Their heads were mainly pointed and their teeth mostly conical and sharp.

• Lastly, the species were air-breathing, warm-blooded and bore live young.