Saurashtra was known as Navanagar but it was renamed as Saurashtra in 1950. The final match of Ranji Trophy was played in an empty stadium due to Coronavirus fear. 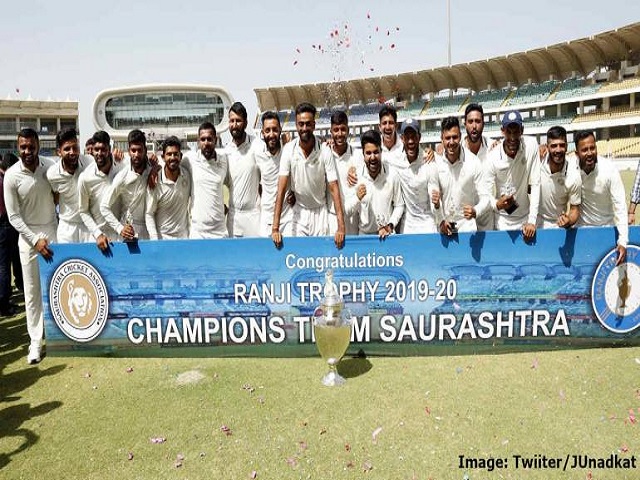 Saurashtra team won the Ranji Trophy title for the first time in 70 years. Saurashtra became the champion based on the lead achieved in the first innings of the final against Bengal. Earlier, Saurashtra was known as Navanagar, Western India and won the trophies in 1936-37 and 1943-44.  It was renamed as Saurashtra in 1950 and started participating in this domestic tournament.

In the last seven years, the Saurashtra team was runners-up three times. It was the fourth final of Saurashtra. Saurashtra achieved the distinction of becoming champion on the basis of first-innings lead against Bengal. Bengal couldn’t hold the title once again as it was last grabbed the title in 1989-90.

The match was being played in an empty stadium due to the threat of Coronavirus. The captain of Saurashtra team Jaydev Unadkat decided to bat after winning the toss. Saurashtra, batting 171.5 overs, scored 425 runs losing all wickets. Arpit Vasavada scored an innings of 106 runs, while Cheteshwar Pujara scored 66 runs, Avi Baroth and Vishwaraj Jadeja scored 54-54 runs.

Highest wicket-takers in a season

The Ranji Trophy is India's first-class domestic cricket competition. Regional and state cricket associations of the country take part in this tournament. The competition is named after Ranjit Singhji, the first Indian player who participated in international cricket from India. The first edition of Ranji Trophy was organized in 1934. Mumbai has won the Ranji Trophy title for 41 times, while Vidarbha has won this title twice.