The signing of the MoU for the development of Seaplane services in India will be a game-changer for both, Civil Aviation and Indian Maritime sectors. Read all you need to know. 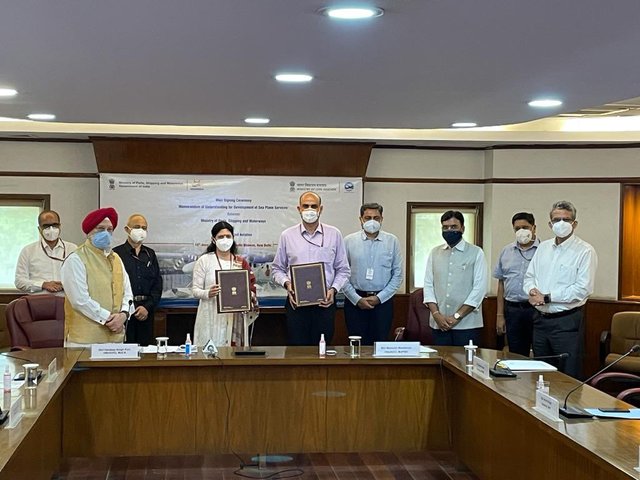 The Ministry of Ports, Shipping and Waterways and Ministry of Civil Aviation on June 15, 2021, signed a Memorandum of Understanding (MoU) for the development of seaplane services in India.

“The signing of the MoU for the development of Seaplane services in India will be a game-changer for both, Civil Aviation and Indian Maritime sectors,” said Mansukh Mandaviya. It will give a boost to the tourism industry and boost seamless connectivity across the nation by promoting eco-friendly transportation through Seaplanes.

India explores new horizons of connectivity and tourism through Seaplanes under the visionary leadership of PM Shri @NarendraModi Ji.
Joined my dear colleague Shri @HardeepSPuri Ji for the MOU signing ceremony for the Development of Seaplanes services in India. (1/2) pic.twitter.com/01YsRgQ6s1

Hardeep Singh Puri said, “This MoU between the two Ministries will help in expediting the development of new water aerodromes and also operationalization of new seaplane routes in India.” This MoU will give a boost to the provision of a new king of tourism services in India, Puri added.

Joined my colleague Sh @MansukhMandawiya Ji at signing of an MoU between @moca_goi & @shipmin_india for further bolstering the visionary initiative of seaplane services launched by PM @narendramodi Ji on 31 Oct 2020 between Sabarmati Riverfront & Statue of Unity. pic.twitter.com/ZiNmdt0r5N

MoU for development of seaplane services in India: Key points

•14 water aerodromes based in Gujarat, Assam, Telangana, Andhra Pradesh, Lakshadweep, and Andaman & Nicobar Islands at a cost of Rs 450 crore are under various stages of development.

•A Coordination Committee with officials from the Ministry of Tourism, Ministry of Civil Aviation, and Ministry of Ports, Shipping and Waterways will be set up for executing the operationalization of seaplane services at various locations in a timely manner.

•Ministry of Civil Aviation (MoCA), Ministry of Ports, Shipping and Waterways (MoPSW), and Sagarmala Development Company Limited (SDCL) will look into the operationalization of Seaplane operating routes as identified or suggested by all agencies.

Role of Ministry of Ports, Shipping and Waterways (MoPSW)

•Work in coordination with Ministry of Civil Aviation (MoCA), Directorate General of Civil Aviation (DGCA), and Airports Authority of India (AAI) by stipulating the timelines for all activities involved in the development of facilities for starting seaplanes operations.

•Conduct bidding process and select potential airlines operators based on their commercial consideration,

•Implement the locations and routes as suggested or identified by the Ministry of Ports, Shipping and Waterways (MoPSW) during the bidding process in the UDAN scheme document,

•Make provision of funds or any financial support regarding water aerodromes awarded under RCS-UDAN scheme,

•Work in coordination with Chief Secretaries of all States for the Seaplanes operations.

•There is only one seaplane service operational In India as of now.

•PM Narendra Modi on October 31, 2020, inaugurated the country's first seaplane service between the Sabarmati riverfront and the Statue of Unity in Kevadia in Ahmedabad, Gujarat.