This is the third and final phase of voting in Assam, while West Bengal has 5 more phases remaining. The voting is also underway for by-polls in the Malappuram Parliamentary constituency in Kerala and Kanniyakumari Lok Sabha seat in Tamil Nadu. 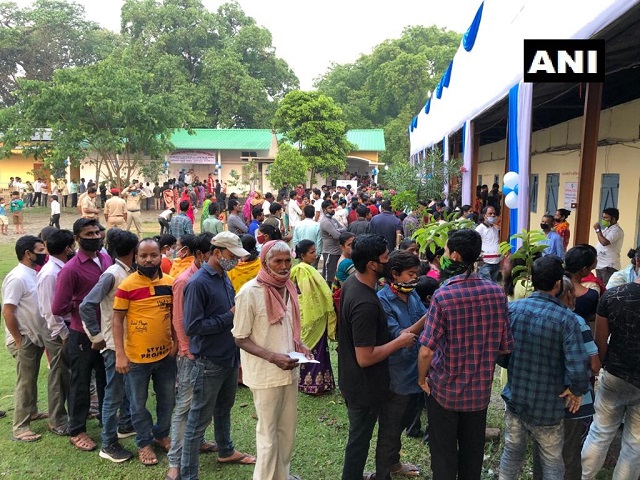 This is the third and final phase of voting in Assam, while West Bengal has 5 more phases remaining. The voting is also underway for by-polls in the Malappuram Parliamentary constituency in Kerala and Kanniyakumari Lok Sabha seat in Tamil Nadu.

The voting began at 7 am in all poll-bound states and will conclude at 6 PM in Assam, 6.30 PM in West Bengal and at 7 PM in Kerala, Tamil Nadu and Puducherry.

West Bengal recorded a 14 percent voter turnout till 9.30 am.

Tamil Nadu recorded a 13.8 percent voter turnout till 9.30 am

•In Tamil Nadu, 234 Assembly seats are going to polls across 37 districts with 3,998 candidates in the fray including 411 women candidates.

•The state is expected to witness multi-cornered contests this time. It has two major alliances that will go up against each other, the ruling AIADMK-BJP alliance and the coalition of the DMK and Congress.

"All NDA candidates will win. AIADMK is going to form the government for the third consecutive time," he says pic.twitter.com/vB8kza4W2R

I have been getting reports of high voter turnout from across the State. This vote is against the ruling party: DMK President MK Stalin, in Chennai#TamilNaduElections pic.twitter.com/Z77qoG2ym4

The next course of action is to educate people about this cash distribution, how disastrous it is for their lives and democracy. The money dolling out politicians put the blame on the people. This is a vicious circle and we are trying to make it virtuous: Kamal Haasan pic.twitter.com/zIETBJShsu

•The single-phase elections are taking place in the state today amid rising COVID-19 cases. Face masks have been made mandatory for all voters.

"Our secular progressive alliance is all set for a landslide victory as people of Tamil Nadu want a change," he says pic.twitter.com/TY4Ii4qZeI

•All polling booths have been equipped with basic facilities such as safe drinking water, face masks, PPE Kits, hand sanitisers, hand gloves and special arrangements for persons with disabilities.

•Uber transport has also been arranged by the Election Commission to help the elderly commute free of cost to cast their vote in Chennai Coimbatore and Tiruchy.

•Covid positive people have been allowed to cast their vote from 6 pm to 7 pm exclusively.

•In Kerala, 140 assembly seats are going to polls in a single phase with 957 candidates in fray in assembly polls. The Elections began at all 140 constituencies at 7 am in the morning and will continue till 7 pm in the evening in 131 constituencies and till 6 pm in 9 naxal- affected constituencies.

•Voting is also being held for Malappuram Parliamentary constituency, where 6 candidates are in the fray.

•Overall, 2.74 crore eligible voters are there in the state with 5 lakh first-time voters.

•The main contest is expected to be between Congress-led UDF, CPM-led LDF and BJP-led NDA.

•Here also, the polling is being held while following strict COVID-19 protocols with proper usage of masks, sanitizers and adherence to social distancing. Thermal screening has also been deployed and security has been tightened.

•Most of the polling booths also have CCTV facility to prevent bogus or double voting.

The COVID19 mortality rate in Kerala is 0.4%. We brought many social welfare measures during COVID19. People are seeing all this and they will vote for us," she said pic.twitter.com/qZvd1ZbHzI

In Puducherry, 30 assembly seats are going to polls with 324 candidates in the fray including 35 women.
There are over 10.04 lakh voters in the state and to enable smooth voting, a total of 1559 polling booths have been set up.

In Assam, 40 assembly seats are going to polls in the third and final phase of voting and 337 candidates are in the fray. Several high-profile candidates are in the fray this time including ministers Himanta Biswa Sarma, Siddhartha Bhattacharya and Chandra Mohan Patowary and state BJP President Ranjeet Kumar Dass and BPF leaders Pramila Rani Brahma and Chandan Brahma.

Assam: Voters queue outside Bengali LP & High School in Amingaon, ahead of the third and final phase of Assembly elections today#AssamAssemblyPolls pic.twitter.com/hhVExnPQ6e

In West Bengal, 31 seats across three districts are going to polls in the third phase and there 205 candidates in the fray including 13 women.

There are over 78.52 lakh voters in this phase including 38.59 lakh women and 246 Third Gender persons.
The BJP and ruling AITC are contesting for all the 31 seats while Congress, Left parties and Indian Secular Front are fighting under the banner of Sanyukt Morcha. The CPI (M) and BSP have also fielded 13 candidates each.