The SunRISE mission will provide critical information on how the Sun’s radiation affects the space environment. This will protect the astronauts flying in future Moon or Mars missions.

The National Aeronautics and Space Administration (NASA) selected a new mission-SunRISE on March 30, 2020 to study how the Sun creates and releases giant solar particle storms.

The Sun Radio Interferometer Space Experiment (SunRISE) mission also aims to help scientists understand the workings of the Solar System. It will also help protect astronauts going to the Moon and Mars in the future from the solar storms. 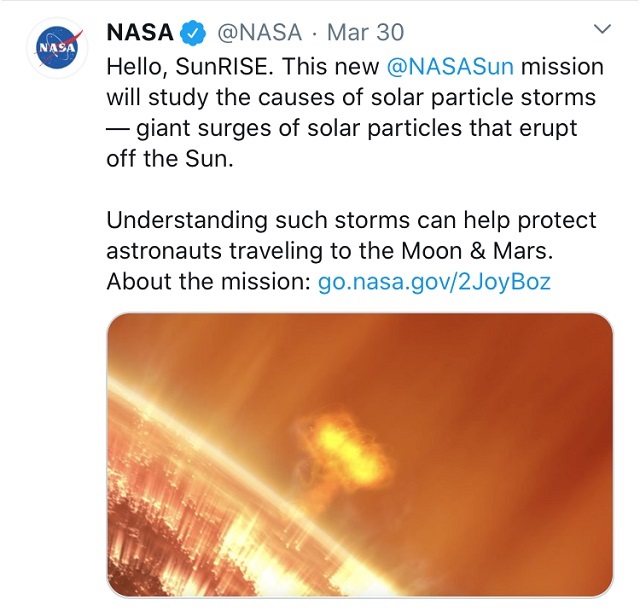 The more information there is about the Sun and how it impacts space weather events, the easier it would be to reduce its effects on the astronauts and spacecraft.

•  The SunRISE mission will have six CubeSats operating as one very large radio telescope.

•  The mission, attached by a Payload Orbital Delivery System (PODS), will deploy the 6 CubeSats in a Geosynchronous earth orbit (GEO). The 6 CubeSats would fly at a distance of at least 10 km from each other.

•  The CubeSats will fly above the Earth’s atmosphere, which otherwise blocks the radio signals SunRISE will observe.

•  The six CubeSats will create 3D maps to pinpoint the place where the giant particle bursts originate on the Sun and how they evolve as they move outward into space.  This information will help determine what initiates and accelerates these giant jets of radiation.

•  The six CubeSats will also work together to map the pattern of magnetic field lines reaching from the Sun out into interplanetary space. This mapping will be undertaken for the first time.

•  The SunRISE mission has been proposed to launch as a rideshare mission on a commercial satellite built by Maxar. It is likely to be launched using a commercial rocket.

NASA had chosen two missions in August 2017 for its Mission of Opportunity program, a part of its Explorers Program, to conduct an 11-month concept study. The SunRise mission was one of the two missions.

NASA approved an extra year for the program’s formulation study in February 2019. The space agency was awarded $62.6 million in March 2020 to design, build and launch the SunRISE mission. The mission is expected to be launched in July 2023.

The SunRISE is being managed by NASA’s Jet Propulsion Laboratory (JPL) in Pasadena, California.