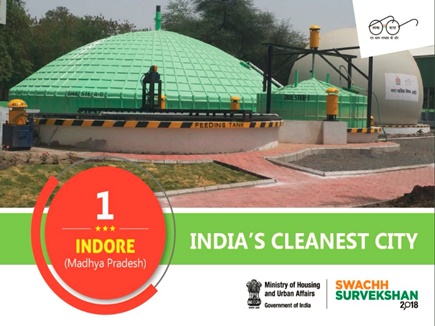 Swacch Surveskshan 2018: Indore is the cleanest city of India

Union Minister for Housing and Urban Affairs, Hardeep Puri on May 16, 2018 released the results of the Swacch Surveskshan 2018. Indore has emerged as the cleanest city again in India for second year in a row.

Indore and Bhopal have managed to retain their positions as the top 2 cleanest cities, as that of previous year.

• Chandigarh was ranked as the third cleanest city, moving up from Rank 11 in 2017.

• Uttar Pradesh’s Ghaziabad was named as the fastest moving big city of the Swachh Survekshan 2018, moving up to Rank 36 from the previous 351 in 2017.

• Jharkhand was declared as the best performing state, followed by Maharashtra and Chhattisgarh.

• In terms of sanitation coverage, around 2133 cities and urban local bodies have been certified as ODF and 2679 cities have self-declared themselves as ODF and await certification.

Who organised the cleanliness survey?

• The Swachh Survekshan 2018 was organised by the Union Ministry of Housing and Urban Affairs (MoHUA) under the aegis of the Swachh Bharat Mission (Urban) with an aim to estimate levels of cleanliness across cities in the country.

How the data was collected?

The data for ranking the cities under the Swachh Survekshan was collected from 3 sources:

• Service Level Progress:  This component was chosen with an aim to verify whether Urban Local Bodies (ULBs) are implementing the Swachh Bharat Mission (Urban) in the most efficient way.

• Direct Observation:  Assessors made random field visits in different parts of the city and public conveniences to verify general cleanliness in the cities.

• Citizens Feedback:  Feedback was directly collected from citizens and performance of Swachhata App was monitored.