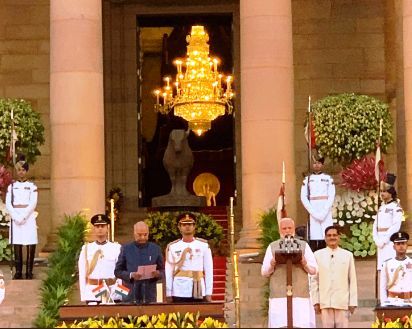 Modi Cabinet 2.0: Complete list of new Council of Ministers 2019: Ministires have been alloted among all 54 Cabinet and State Ministers. As per the new allocation, Narendra Modi is Prime Minister and also in-charge of: Ministry of Personnel, Public Grievances and Pensions; Department of Atomic Energy; Department of Space; and All important policy issues; and All other portfolios not allocated to any Minister.

1. Amit Shah: Amit Shah took oath of office and secrecy in newly formed cabinet. Amit Anilchandra Shah has been President of the Bharatiya Janata Party (BJP) since 2014. Under his leadership during 2014-16, BJP achieved success in Legislative Assembly elections in Maharashtra, Haryana, Jammu & Kashmir, Jharkhand and Assam, but lost the elections in Delhi and Bihar. BJP won 303 seats in 2019 Lok Sabha Elections under his leadership.

4. Nirmala Sitharaman: Nirmala Sitharaman has included in Modi Cabinet 2.0. She was serving as the Minister of Defence of India since 2017 and has served as Member of the Rajya Sabha, upper house of the Indian Parliament, since 2016.

5. Smriti Irani: Smriti Zubin Irani took oath of office to become part of the Modi Cabinet 2.0 at the Rashtrapati Bhavan. In her last term, she joined cabinet as HRD Minister but later she was moved to Ministry of Textiles.

6. S Jaishankar: Former foreign Secretary S Jaishankar took oath of office as a minister in Prime Minister Narendra Modi’s cabinet. Jaishankar has been ambassador to key countries like the US and China. An Indian Foreign Service (IFS) officer of the 1977 batch.

10. Mahendra Nath Pandey: Mahendra Nath, who served as a Union minister of state (MoS) in the Ministry of HRD between 2016 and 2017, took oath as a cabinet minister.

14. Prakash Javadekar: He is a prominent BJP leader, who served as the Union Minister of Human Resource Development (HRD) in last NDA term, also took oath as Cabinet Minister. Javadekar also served as the Minister of State for Information and Broadcasting for a short period.

15. Mukhtar Abbas Naqvi: He sworn in as a Union Minister in PM Narendra Modi’s second cabinet. For last two term he was member of Rajya Sabha from Uttar Pradesh and Jharkhand. Naqvi was the Union minister for Minority Affairs, of which he took independent charge in 2016.

17.  Thawar Chand Gehlot: He is a prominent face of BJP among Dalits, took oath as a Cabinet minister. Gehlot was the minister of social justice and empowerment in the last Narendra Modi government.

23. Dharmendra Pradhan: He sworn-in in Prime Minister Narendra Modi's new council of ministers. He is also known as "Ujjwala Man'.

What is the Union Council of Ministers; how Council is different from Union Cabinet?

The Council is like a body of advisers to the Head of the state. The Ministers are appointed by the President on advice of the Prime Minister, under Article 75 (1) of the Constitution of India. However, the ministers hold office during the pleasure of the President and are collectively responsible to the Lok Sabha.

A member of the Council of Ministers can be a member of either the Lok Sabha or the Rajya Sabha.

How Union Council is different from Union Cabinet?