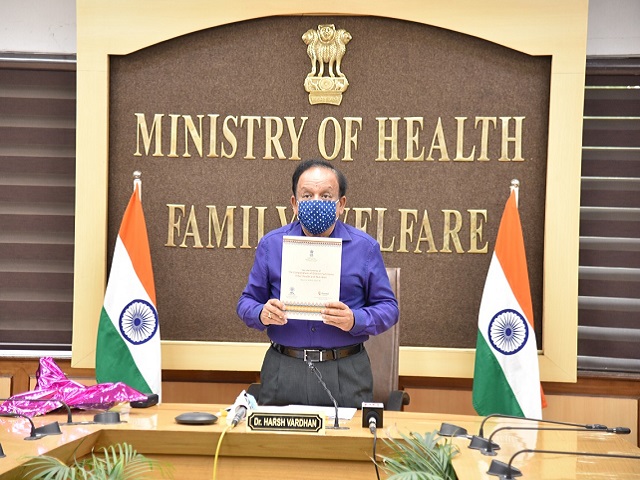 Anamaya envisions to build a sustainable, high-performing health ecosystem to improve health of our tribal population.

It will play a crucial role in achieving our ultimate goal of 'Health for All'@MoHFW_INDIA @TribalAffairsIn pic.twitter.com/mUhf93dYbt

A statement by the Union Health Ministry mentioned, “This multi-stakeholder initiative ‘Anamaya’ will converge efforts of various government agencies and organizations to enhance the health and nutrition status of the tribal communities of India.”

Harsh Vardhan appreciated the efforts of the Ministry of Tribal Affairs to ensure holistic health for the tribal communities. He said, “In the past one year, several efforts have been made by the Health Ministry to jointly address the health gaps of the tribal communities with the Ministry of Tribal Affairs. Recently, the Tribal Tuberculosis Initiative was launched by both the Ministries to fulfil the PM’s goal of ‘TB Mukt Bharat’ by 2025, five years ahead of the global deadline.”

It lays out decisive roadmap to address high burden of TB in our tribal population and help fulfil our goal of 'TB Mukt Bharat' pic.twitter.com/FKqcrvqvtQ

The union minister also called on the senior leaders to create a similar level of awareness for TB just as it is for COVID-19. He mentioned that there will efforts to address other critical diseases prevalent in the tribal communities such as sickle cell disease, malaria, anaemia, malnutrition.

He highlighted that though India has witnessed a huge improvement in the level of quality and access to healthcare services in the last decade, the tribal population still lacks access to health facilities and health care providers due to cultural and language differences, poor treatment-seeking behaviour, shortage of human resources, difficult terrain, etc.

MoTA in association with @PiramalS is launching the mission ‘Anamaya’ on the occasion of World Health Day on April 07, 2021 as a part of Tribal Health Collaborative that in co-partnership with @MoHFW_INDIA aims to plan strategies to tackle different tribal health related issues. pic.twitter.com/iGtSrZREOL

Present at the launch event, Union Minister of Tribal Affairs Arjun Munda also spoke about the relentless efforts by the Tribal Affairs Ministry to address the health challenges of the tribal communities, engaging with State governments, civil society organizations and other stakeholders.

About the Tribal Health Collaborative ‘Anamaya’

• It is a multi-stakeholder initiative launched by the Union Health Ministry in collaboration with the Union Minister of Tribal Affairs on April 07,2021.

• The collaborative is in association with Bill and Melinda Gates Foundation (BMFG) and Piramal Foundation.

• This collaborative aims at enhancing the health and nutrition eco-system of the tribal communities of India by converging efforts of various Government agencies and organizations.

• With this collaborative, the Ministry will work on setting up the National Council on Tribal Health and a Tribal Health Cell to monitor healthcare needs in the tribal areas as well as implement the Tribal Health Action Plan.