Despite being an actor, he was also a prolific writer. He wrote the story and dialogues for more than 250 films in Hindi and Urdu, beginning with Randhir Kapoor - Jaya Bhaduri starrer ‘Jawani Diwani’ (1972).

Veteran Bollywood actor-director and scholar, Kader Khan passed away on January 1, 2019 following a prolonged illness in Toronto, Canada. He was 81. He is survived by his wife Hajra, son Sarfaraz, daughter-in-law, and grandchildren.

He had been hospitalised for nearly four months due to various old-age related ailments including breathing issues and finally succumbed to death.

As per reports, he was suffering from Progressive Supranuclear Palsy, a degenerative disease that causes loss of balance, difficulty in walking and dementia.

He was known for his comic roles in films like Dulhe Raja, Aakhein, Coolie No. 1, Haseena Maan Jayegi, and several others. 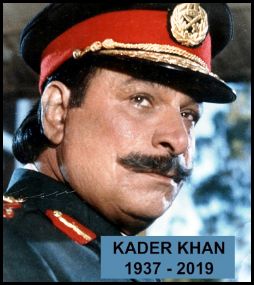 • Born on October 22, 1937 in Afghanistan to a Pashtun family, Kader Khan was educated in a municipal school and later graduated from Mumbai's Ismail Yusuf College, Jogeshwari.

• He was an engineer by training and a professor of civil engineering. Khan used to teach the theory of structure, hydraulics, strength of material, and RCC steel.

• In his acting career of over 35 years, he acted in over 300 films in memorable roles.

• Despite being an actor, he was also a prolific writer. He wrote the story or dialogues for more than 250 films in Hindi and Urdu, beginning with Randhir Kapoor - Jaya Bhaduri starrer ‘Jawani Diwani’ (1972).

• He had a huge collection of books on various subjects related to film-making, acting, screenplay writing, penning story-dialogues and other departments.

• He will be last seen in Hera Pheri 3 in the role of a doctor. The movie is expected to release this year.