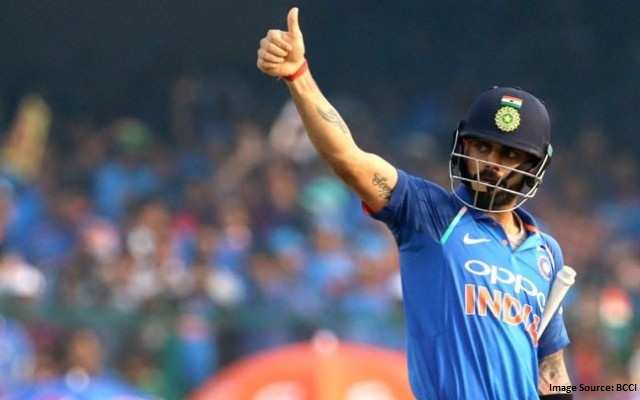 Kohli and Sharma together added 230 runs for the second wicket thus, becoming the first pair to achieve double century partnerships on four occasions.

• Virat Kohli with his individual score of 113 runs became the sixth Indian to complete 9000 ODI runs. He got to the landmark in the 37th over.

• Mahendra Singh Dhoni had reached the milestone in 2016. Other Indians who have achieved the feat previously include Sachin Tendulkar, Rahul Dravid, Sourav Ganguly and Mohammad Azharuddin.

• Overall, Kohli, who played his 202nd innings, has become the 19th batsman to break the 9000-run mark, making him the fastest to get there.

• Kohli with his knock also surpassed Rahul Dravid (48 tons) to become the second Indian batsman with most international hundreds (49) , only after Sachin Tendulkar (100 tons).

• Earlier in the series, Kohli had surpassed former Australian skipper Ricky Ponting in the list of most ODI hundreds with his 31st ton.

Meanwhile, Sachin Tendulkar tops the list of most international hundreds as well as most ODI hundreds with a total of 49. Tendulkar also holds the record of being the leading run-getter in both test and ODI formats.