The day’s updated quizzes cover topics such as Pulitzer Prize 2021, India's retail inflation, World Competitiveness Index 2021 and  ICC Hall of Fame among others. 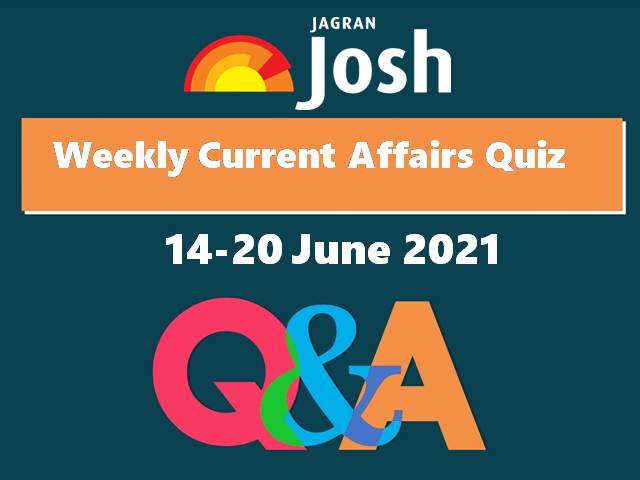 7 June to 13 June 2021: The Current Affairs Quizzes section of Jagranjosh aims to help every competitive exam aspirant to revise the day at ease. The day’s updated quizzes cover topics such as Pulitzer Prize 2021, India's retail inflation, World Competitiveness Index 2021 and  ICC Hall of Fame among others.

2. Which among the following books won the Pulitzer Prize 2021 in Fiction category?

a) The Night Watchman

b) A Registry of My Passage Upon the Earth

c) The Dead Are Arising: The Life of Malcolm X

4. What is the new GST rate for COVID-19 testing kits, medical-grade oxygen and ventilator?

5. Which vaccine is reportedly more effective against 'Delta' COVID-19 variant?

6. Which state has decided to set up its own series of annual awards similar to Bharat Ratna?

7. The world's third-largest diamond has been unearthed in which nation?

8. Which nation has topped the World Competitiveness Index 2021?

9. India has been ranked at which position on the World Competitiveness Index 2021?

11. Who has become the new Prime Minister of Israel?

12. The world's first wooden satellite will be launched from which nation?

13. Who among the following has been inducted into the ICC Hall of Fame this year?

14. Who has become the first player to win both women's singles and doubles title at the French Open since 2000?

The Night Watchman by Louise Erdrich won Pulitzer Prize 2021 in Fiction category, while Franchise: The Golden Arches in Black America, by Marcia Chatelain won the Pulitzer in History category.

India's retail inflation measured by the Consumer Price Index (CPI) jumped to 6.3 percent in May, the highest in the last six months due to higher food and fuel prices, informed Union Statistics Ministry on June 14, 2021.

The Russian Direct Investment Fund (RDIF) stated on June 15, 2-21 that its Russian Sputnik V COVID-19 vaccine is more efficient against the Delta variant of the virus than any other vaccine so far. The Delta variant, which was first identified in India, has been listed as the fourth Variant of Concern by the World Health Organization (WHO). It is believed to have led to the resurgence of COVID-19 infections in many countries, including the deadly second wave in India.

The Assam Government has decided to institute its own series of annual awards similar to Bharat Ratna and Padma awards entailing various benefits for the awardees. The decision to start its own civilian awards was taken at the state Cabinet meeting on June 8, 2021, which was headed by the Chief Minister of Assam Himanta Biswa Sarma.

Debswana Diamond Company on June 1, 2021, found the world’s third-largest diamond in the Jwaneng mine in Botswana, South Africa.The stone weighs 1,098 carats and measures measuring 73mm long, 52mm wide, and 27mm thick, and is yet to be named.

Switzerland topped the IMD World Competitiveness Index 2021, followed by Sweden at 2nd place. While Denmark moved one spot down to the 3rd rank, the Netherlands retained its 4th place and Singapore slipped to the fifth place from its top ranking in 2020.

India maintained its 43rd rank on the World Competitiveness Index 2021, compiled by the Institute for Management Development (IMD). Switzerland has been ranked first on the index, followed by Sweden at the second spot and Denmark at the third spot.

Kenneth Kaunda was the first democratically elected President of Zambia from 1964 to 1991. He initially worked as a school teacher. The champion of African independence passed away sadly at June 17, 2021 at the age of 97 years.

Naftali Bennett, a multi-millionaire, was elected as the new Prime Minister of Israel after the Parliament approved a new government on June 13, 2021. He leads the right-wing Yamina Party which has called for Israel to annex parts of the West Bank.

The European Space Agency (ESA) has planned to put the world’s first wooden satellite, WISA Woodsat, in Earth’s orbit by the end of 2021. The satellite will be launched aboard Rocket Lab Electron rocket from the Mahia Peninsula launch complex in New Zealand. The satellite's mission will be to test the applicability of wooden materials like plywood in spacecraft structures and expose it to extreme space conditions, such as heat, cold, vacuum and radiation, for an extended period of time.

The International Cricket Council inducted ten new cricketers into the ICC Hall of Fame on June 13, 2021. The new inductees include four special inductees. Legendary Indian cricketer Vinoo Mankad is among the ten ICC Hall of Fame inductees for 2021.He was the first Indian to score 1000 test runs and take 100 test wickets.