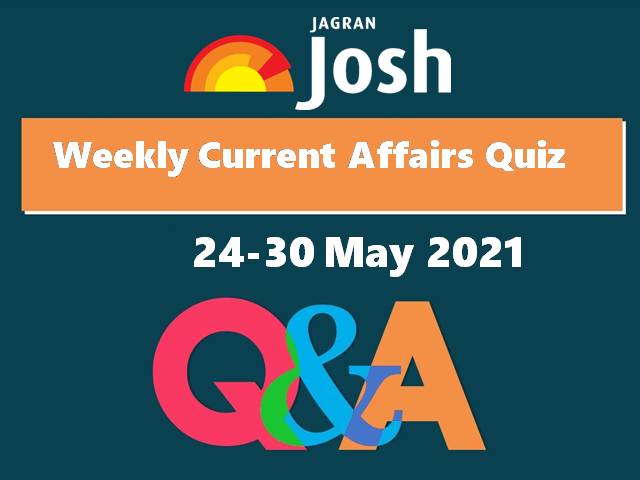 24 May to 30 May 2021: The Current Affairs Quizzes section of Jagranjosh aims to help every competitive exam aspirant to revise the day at ease. The day’s updated quizzes cover topics such as new CBI Director,  Energy Frontier Award 2020, Mount Nyiragongo eruption and 2021 Billboard Music Awards among others.

1. Who has been appointed as the new CBI Director?
a) Rakesh Asthana
b) YC Modi
c) Subodh Jaiswal
d) SS Deswal

2. Who has been conferred with Energy Frontier Award 2020?
a) Swapan Kumar Datta
b) Ratan Kumar Sinha
c) B Sesikeran
d) C.N.R. Rao

4. Which vaccine manufacturer has said its vaccine has been found to be 100 percent in prevent COVID-19 among adolescents?
a) Moderna
b) Pfizer
c) J&J
d) Sputnik

6. Which animal will be re-introduced in India after being declared extinct in 1952?
a) Sumatran rhinoceros
b) Pink-headed Duck
c) Indian Aurochs
d) Cheetah

7. Mount Nyiragongo erupted after almost two decades on May 22, 2021. The active volcano is located within which nation?
a) Democratic Republic of Congo
b) Rwanda
c) Nigeria
d) Niger

8. Which internet browser will be retired for certain versions of Windows 10 by June 2022?
a) Mozilla Firefox
b) Internet Explorer
c) Opera
d) Google Chrome

9. The Military junta of which nation has arrested the President, Prime Minister and Defence Minister?
a) Zambia
b) Mali
c) Ethiopia
d) Eritrea

11. Which Indian sports federation was honoured with the prestigious Etienne Glichitch Award on May 21st?
a) All India Tennis Association
b) All India Football Federation
c) Badminton Association of India
d) Hockey India

12. Who won Artist of the Decade Award at the 2021 Billboard Music Awards?
a) Lady Gaga
b) Taylor Swift
c) The Weeknd
d) Drake

1. (c) Subodh Jaiswal
Senior IPS officer Subodh Kumar Jaiswal was on May 25, 2021 appointed as the new CBI director for two years, as per the personnel ministry order. A three-member selection committee led by PM Narendra Modi on May 24, 2021, had shortlisted Jaiswal’s name for the position of director, Central Bureau of Investigation.

2. (d) CNR. Rao
Bharat Ratna Professor CNR Rao was honoured with the International ENI Award 2020, also known as Energy Frontier Award 2020, for his research in renewable energy sources and energy storage. He has been working on hydrogen energy as the only source of energy for the benefit of all mankind.

3. (c) Spain
Indian economist and Nobel Laureate Amartya Sen was awarded Spain’s top Princess of Asturias Award in the Social Sciences category on May 26, 2021. This was informed b the Spanish Prize Foundation.

4. (a) Moderna
Moderna announced on May 25, 2021 that various studies have shown that its COVID-19 vaccine is 100 percent effective in preventing COVID-19 infection among adolescents aged between 12 and 17 years.

6. (d) Cheetah
The world’s fastest land animal, the Cheetah which was declared extinct in India in 1952, will be re-introduced in India in November 2021 at the Kuno National Park in Madhya Pradesh, according to State Forest Minister Vijay Shah.

9. (b) Mali
The military junta in Mali has arrested President Bah Ndaw, Prime Minister Moctar Ouane and Defence minister Souleymane Doucoure of the country's interim government following a cabinet reshuffle on May 24, 2021.

10. (b) Belarus
Belarus on May 23, 2021 force landed a commercial plane Ryanair that was flying from Athens in Greece to Vilnius, the capital city of Lithuania at Minsk, capital of Belarus. Belarus President Alexander Lukashenko reportedly ordered the detour of the flight on the pretext of a bomb scare to arrest dissident Belarus journalist Roman Protasevic, who had been living in exile in Lithuania since fleeing Belarus in 2019.

11. (d) Hockey India
Hockey India was honoured prestigious Etienne Glichitch Award on May 21, 2021, for its contribution and work towards the growth and development of Hockey in India. The award was announced by the governing body of the game International Hockey Federation (FIH) during the HockeyInvites conference held virtually as part of its 47th FIH Congress.

12. (d) Drake
Drake won the Artist of the Decade Award at the 2021 Billboard Music Awards. The hip-hop artist brought along his three-year-old son Adonis on stage to accept his award. The artist who dropped his debut album, Thank Me Later, a little over 10 years, has slowly climbed to the top in rap music, becoming one of the most successful rappers in Billboard history.