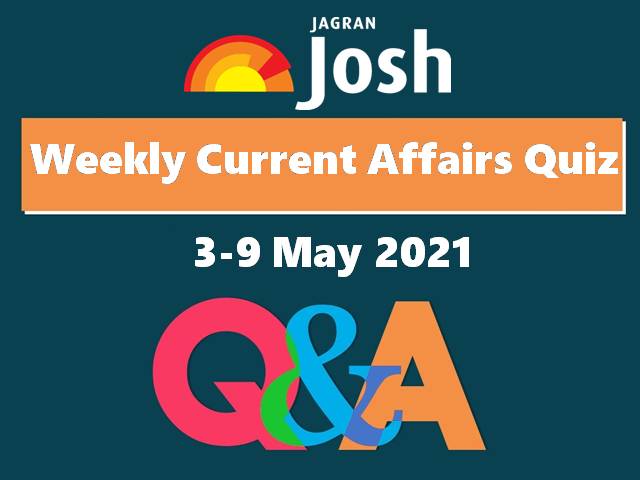 3 May to 9 May 2021: The Current Affairs Quizzes section of Jagranjosh aims to help every competitive exam aspirant to revise the day at ease. The day’s updated quizzes cover topics such as world’s first Artificial Intelligence ship, new RBI deputy governor,  vaccine for young adults and oldest human burial site among others.

2. Cabinet has given its approval for strategic disinvestment in which bank?
a) SBI
b) BOI
c) IDBI
d) BOB

3. Former Lok Sabha MP and Union Minister Ajit Singh passed away in the morning on May 6, 2021 at the age of 86. He was the chief of which among the following parties?
a) RLD
b) JD(U)
c) RJD
d) LJP

4. Former Union Minister and Governor Jagmohan passed away on May 3, 2021. He had served as the Governor of which state for two terms?
a) J&K
b) Delhi
c) Goa
d) None of the Above

5. India has launched a comprehensive partnership on migration and mobility with which nation?
a) UK
b) US
c) Canada
d) France

6. Who has been appointed as the deputy governor of RBI?
a) TN Rao
b) T Rabi Sankar
c) Venugopal Menon
d) Shashi Iyer

7. The President of which African nation has declared a state of emergency?
a) Ghana
b) Zambia
c) DRC
d) Niger

8. Researchers have discovered 100 million-year-old bones of Sauropods in which Indian state?
a) Mizoram
b) Andhra Pradesh
c) Tripura
d) Meghalaya

10. The US FDA is likely to authorise which vaccine for young adults aged above 12 years?
a) Pfizer
b) Moderna
c) J&J
d) AstraZeneca

11. Which nation's cricket team has become the top-ranked ODI team in the world?
a) India
b) Australia
c) New Zealand
d) None of the Above

12.  The oldest human burial site has been discovered in which country?
a) Kenya
b) Egypt
c) Brazil
d) Vietnam

1. (c) Mayflower 400
Mayflower 400 is the world's first Artificial Intelligence Ship, built by a team of researchers from the marine research organization ProMare in collaboration with IBM. It is an unmanned 15-m-long trimaran that weighs nine tons and is a completely autonomous ship. The ship is set to sail on a transatlantic voyage. It will track aquatic mammals, analyze plastic in the water and study marine pollution.

2. (c) IDBI
The Cabinet Committee on Economic Affairs on May 5, 2021 gave its approval for the strategic disinvestment and transfer of management control in IDBI Bank Ltd. The cabinet was chaired by Narendra Modi.

3. (a) RLD
Rashtriya Lok Dal (RLD) President and former Union Minister Ajit Singh passed away in the morning on May 6, 2021. He was 86. He had tested positive for COVID-19 on April 20th and was being treated at a private hospital in Guguram. As per reports, his condition deteriorated on May 5th due to a lung infection.

5. (a) UK
India and the UK have launched a comprehensive partnership on migration and mobility that aims to facilitate greater opportunities for the mobility of students and professionals between the two countries.

6. (b) T Rabi Sankar
The Appointments Committee of the Cabinet on May 1, 2021 approved the appointment of T Rabi Sankar as the new deputy governor of the Reserve Bank of India. He will be succeeding BP Kanungo, who retired from the post on April 2nd after receiving one-year extension in his position.

7. (c) DRC
The President of the Democratic Republic of Congo (DRC), Felix Tshisekedi, has declared a state of emergency over the increasing violence in the eastern provinces in North Kivu and Ituri.

8. (d) Meghalaya
The researchers have identified the fossil bone fragments of the long-necked dinosaurs, known as Sauropods from an area around West Khasi Hill Districts in Meghalaya. The fossil dates back to about 100-million years.

9. (b) Venus
NASA’s Parker Solar Probe, during a brief swing by Venus in July 2020, detected a natural radio signal from Venus' atmosphere. The Parker Solar Probe was launched in 2018 as a solar mission to analyze the Sun.

10. (a) Pfizer
The United States Food and Drug Administration is likely to authorize the use of the COVID-19 vaccine of Pfizer for young adults of age 12 and older by the next week. The government aims at setting up shots for many before the beginning of the next school year.

11. (c) New Zealand
New Zealand has replaced reigning world champions England and become the top-ranked side in the One-day International rankings. New Zealand gained three ranking points after beating Bangladesh 3-0 in their ODI series. The team moved up two slots in the ICC Men's ODI Team Rankings with an aggregate of 121.

12. (a) Kenya
Archaeologists have discovered the oldest human burial in Africa that dates back to 78,000 years at a cave site called Panga ya Saidi near the Kenyan coast. The remains belong to a 2-3 years old toddler who looks to have been laid to rest with a pillow.