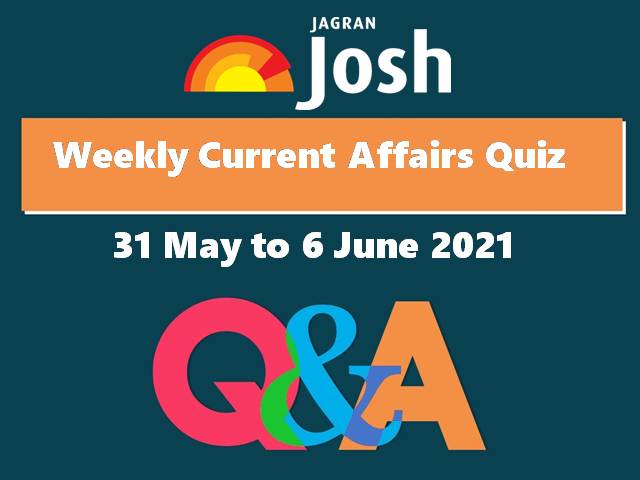 31 May to 6 June 2021: The Current Affairs Quizzes section of Jagranjosh aims to help every competitive exam aspirant to revise the day at ease. The day’s updated quizzes cover topics such as new NHRC Chairman, India's GDP growth in FY 2021-22, fastest woman to scale Mount Everest and world's first human case of H10N3 Bird Flu among others.

2. Who has taken charge as the new Chairman of the National Human Rights Commission?

3. Who has become the world's fastest woman to scale Mount Everest?

4. Which state government has announced a ‘Covid-free village’ contest with an award of Rs 50 lakh for the winner?

5. WHO has given what names to the COVID-19 variants first found in India?

a) Kappa and Delta

b) Alpha and Beta

6. The world's first human case of H10N3 Bird Flu has been reported in which nation?

7. Which Olympic-bound Indian wrestler has failed his dope test?

8. Which nation's largest naval ship, The Kharg, sank after catching fire on June 2, 2021?

9. Issac Herzog has become the 11th President of which nation?

10. Which nation has allowed couples to have three children, ending its two-child policy?

12. African Union has suspended the membership of which nation after two military coups in nine months?

14. Who among the following has withdrawn herself from the French Open?

Tsang Yin-hung has created a new world record by climbing the world’s highest peak, Mount Everest in just 25 hours and 50 minutes, becoming the fastest woman to scale the peak.

The Maharashtra Government on June 2, 2021, announced the ‘Covid-free village’ contest with an award of Rs. 50 lakh for the village which will bag the first position. The contest has been introduced to encourage the villagers to follow the COVID-19 protocols to limit the spread of the deadly virus.

5. (a) Kappa and Delta
The B.1.617.1 and B.1.617.2 COVID-19 variants that were first identified in India, have been named as ‘Kappa’ and ‘Delta’ respectively by the World Health Organisation. The naming has been done to simplify the public discussion about the variants.

6. (a) China
China has reported the world's first known human case of the H10N3 strain of bird flu. A 41-year-old man in China's eastern Jiangsu province has been confirmed to have been infected with the bird flu strain, as per a statement by China's National Health Commission on June 1, 2021.

Indian wrestler Sumit Malik has failed his dope test with just 49 days to go for the Tokyo Olympics, which are scheduled to be held in Japan. Sumit Malik's A sample was collected in Bulgaria after the Olympic qualifier and it came back positive for a banned substance. The wrestler has been provisionally suspended.

Iran's largest navy ship, known as The Kharg, sank after catching fire in the Gulf of Oman early on June 2, 2021. According to Iranian media, the fire broke out at around 2.25 am during a training mission when the ship was near the port of Jask, which is a major shipping lane. No casualties were reported as the entire crew of the ship was able to escape the wreck in time.

Labor Veteran Issac Herzog has been elected as the 11th President of Israel in a secret ballot in the Knesset (Parliament). The former labor leader was elected by the Parliament in a vote as the opposition lawmakers were holding the negotiations to form a coalition to end Prime Minister Netanyahu’s 12 straight years in office.

China has decided to allow each couple to have up to three children, ending its strict two-child policy. This comes after China's population data over the past decade showed the slowest population growth in decades.

HDFC Bank on June 3, 2021 announced its plans to become carbon neutral by 2031-32. The private bank is looking at reducing its emissions, energy and water consumption.

The African Union on June 2, 2021, suspended the membership of the Republic of Mali on the grounds of the second military coup detention of a president and prime minister in nine months.Military coup leader Colonel Goita had last week ordered the arrest of the country’s interim President N’Daw and Prime Minister Ouane causing global outrage.

World no. 2, Naomi Osaka has decided to withdraw herself from French Open Tournament following media boycott fallout. The Japanese Tennis Player made the announcement on May 31, 2021. This came amidst the ongoing controversy regarding her decision of boycotting press conferences at the ongoing French Open.