The fifth phase of West Bengal Polls is currently underway in 45 Assembly Constituencies across districts including Kalimpong, Darjeeling, Jalpaiguri, North 24 Parganas, Purba Bardhaman and a segment of Nadia. 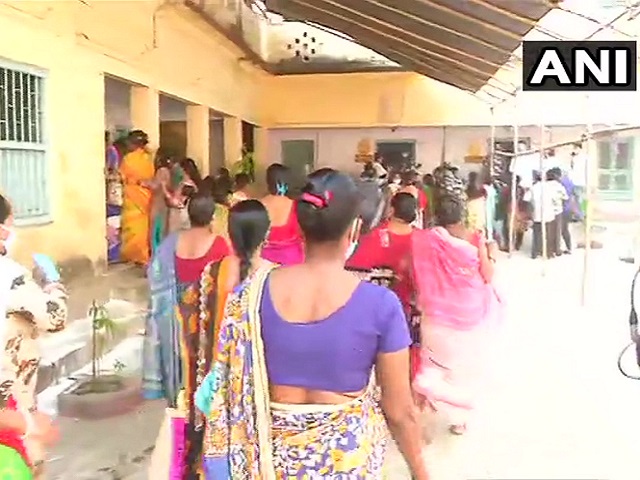 The fifth phase of West Bengal Polls is currently underway in 45 Assembly Constituencies across districts including Kalimpong, Darjeeling, Jalpaiguri, North 24 Parganas, Purba Bardhaman and a segment of Nadia.

Voting for the fifth phase of the State's Assembly elections is underway today. pic.twitter.com/T25K4nHJtp

•Under the fifth phase, 45 constituencies covering the districts of Darjeeling, Jalpaiguri, Kalimpong and a segment of Nadia, North 24 Parganas and Purba Bardhaman have gone to polls.

•A total of 319 candidates are in the fray this time, including 39 women.
This phase will see a key battle between BJP and TMC, as while BJP has maintained a stronghold in 13 constituencies from North Bengal, the TMC is in a relatively comfortable position in the south Bengal seats.

•The Left Front is also expected to create some surprise in some of the seats in South Bengal.

•The election campaign in North Bengal focussed majorly on the Gorkhaland movement, atrocities against tea garden workers and lack of development work, while in the South it majorly focussed on the lack of employment opportunities.

1. Siliguri: CPI(M)'s Ashok Bhattacharya is the key contestant against BJP candidate Shankar Ghosh and TMC's Omprakash Mishra. Bhattacharya is a former Mayor of Siliguri. He is also a prominent communist leader in North Bengal.

2. Dum Dum: Senior TMC leader and minister in the state government Bratya Basu has been fielded from the seat and he is up against CPI(M)'s Palash Das and BJP's Bimal Shankar Nanda.

Voters queue up to cast their votes as 5th phase of polling begins; visuals from Kamarhati, West Bengal#WestBengalPolls pic.twitter.com/UO0ZrQWOCP

4. Barasat: Actor Chiranjeet Chakraborty is contesting from the seat on behalf of TMC against BJP's Shankar Chatterjee and Forward Bloc candidate Sanjib Chattopadhyay.

5.Bidhannagar: TMC's Sujit Bose is pitted against BJP's Sabyasachi Dutta from this seat.

6.  Matigara-Naxalbari: The constituency, known for an over 50-year-old Maoist movement, is witnessing a transition from a Red belt into a saffron fabric. BJP has fielded Anandamoy Barman from the seat, Congress has fielded sitting MLA Sankar Malakar and TMC has fielded Captain Nalini Ranjan Ray. The Congress MLA Malakar has been representing the constituency since 2011.

9. Darjeeling, Kurseong and Kalimpong: TMC has not fielded a candidate from these constituencies as  GJM is backing the TMC here.

Polling underway at Booth number 263 in Darjeeling during the fifth phase of #WestBengalElections2021 pic.twitter.com/CtO0A4dJUP

A total of 1,071 companies of central forces have been deployed to ensure peaceful elections in this phase.

"Elections are underway peacefully. We are ensuring free and fair elections," he says pic.twitter.com/LRahQ7WH0M

Before the start of the fifth phase of polls, the Election Commission had decided to curtail the timings of campaigning for the remaining phases and extended the silence period to 72 hours for each of the phases.

The EC said in its order that no rallies, public meetings, street plays and Nukkad sabhas will be allowed on any day during the days of the campaign between 7 pm and 10 am with effect from 7 pm of April 16, 2021.
It added saying that the silence period for rallies, public meetings, street plays, nukkad sabha, bike rallies or any gathering for campaigning purposes shall be extended to 72 hours before the end of polls for all the remaining polling phases in West Bengal.

The Chief Electoral Officer (CEO) had also called an all-party meeting over adherence to COVID-19 norms during election campaigning. During the meeting, the ruling TMC had suggested to club the remaining phases into one, however, this was not agreed upon by the BJP.

The first four phases of the WB polls were held on March 27, April 1, April 6 and April 10 respectively. The sixth phase of polls is scheduled to be held on April 22. The results will be declared on May 2, 2021.