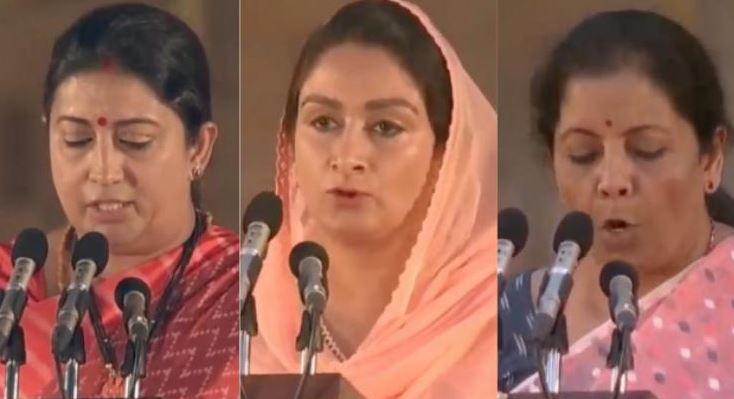 Nirmala Sitharaman served as the Minister of Defence of India in 16th Lok Sabha. She has served as Member of the Rajya Sabha, upper house of the Indian Parliament, since 2016. On September 3, 2017, she was elevated to Defence Minister, being only the second woman after Indira Gandhi to hold the Defence Minister post.

Sushma Swaraj was appointed as the Minister of External Affairs of India on 26 May 2014. She was the second woman who was holding the office, after Indira Gandhi. She has been elected seven times as a Member of Parliament and three times as a Member of the Legislative Assembly. At the age of 25 in 1977, she became the youngest cabinet minister of north Indian state of Haryana.

Smriti Irani is a prominent leader of Bharatiya Janata Party (BJP), she is a Member of Parliament in the Lok Sabha, representing Amethi. On May 26, 2014, she was appointed as the Minister of Human Resource Development (MoHRD). In July 2016 she was given the Ministry of Textiles after cabinet reshuffle. In July 2017, she was handed the additional charge of Ministry of Information and Broadcasting (India) when Former Minister M.Venkaiah Naidu resigned from the Ministry to take part in Vice Presidential Elections.

Uma Bharti served as the Cabinet Minister for Drinking Water and Sanitation in the Union Government of India during 16th Lok Sabha. After Narendra Modi became the Indian Prime Minister in 2014, she was appointed the Minister for Water Resources, River Development and Ganga Rejuvenation, and held this office until September 2017. She became the Minister of drinking water and sanitation on September 3, 2017.

Maneka Gandhi was the Indian Union Cabinet Minister for Women and Child Development in the 16th Lok Sabha government. At present she is Member of Lok Sabha from Sultanpur (Lok Sabha constituency), elected on a Bharatiya Janata Party ticket.

Harsimrat Kaur Badal was holding post of Union Cabinet Minister of Food Processing in the 16th Lok Sabha cabinet. Harsimrat was elected as an MP from Bathinda in 2014. She defeated Indian National Congress-People's Party of Punjab joint candidate, Manpreet Singh Badal. She was appointed in the first term of Modi government as Union Minister for Food Processing.

Najma Heptulla took oath as a cabinet minister in the Narendra Modi headed government on 26 May 26, 2014. She was holding Ministry of Minority Affairs but later was replaced by Mukhtar Abbas Naqvi in July 2016.