The Yashaswini Scheme for Women entrepreneurship aims to support women SHGs with interest-free loans up to Rs 5 lakh.

The two schemes were launched at Dr Shyama Prasad Mukherjee Stadium in Taleigao town near Panaji district of Goa. A breast screening initiative was also launched during the occasion.

Yashaswini Scheme: All you need to know 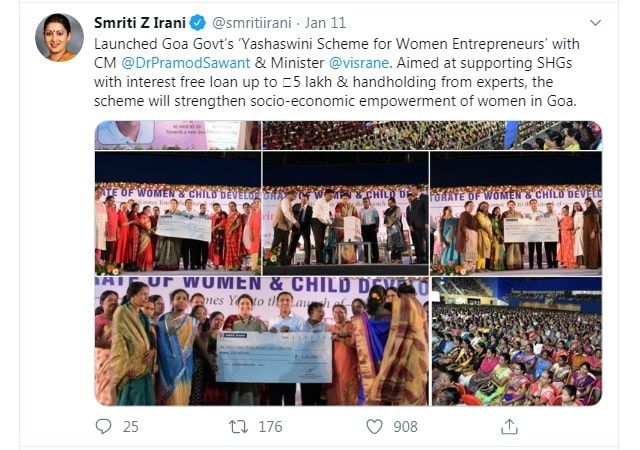 • Under the Yashaswini Scheme, the Goa state government will provide interest-free loans up to Rs 5 lakh to women SHGs. The tenure of the loan will be 5 years.

• The loan amount will be paid in a total of four installments. The repayment of the loan will begin from the second year.

Swasthya Sakhi Project: All you need to know

• Under the Swasthya Sakhi Project, the Goa state government will provide a diagnostic kit to the healthcare workers to enable them to provide basic diagnostic services to the people in the state at their doorsteps.

• Overall the diagnostic kit will comprise all necessary equipment to conduct basic tests such as blood sugar, blood pressure, blood haemoglobin and heart rate. The kit has been developed by the Public Health Foundation of India (PHFI) using corporate social responsibility (CSR) funds.

• The kit will help monitor women’s health during pregnancy and enable early detection of deficiencies and identification of high-risk pregnancy cases for timely referrals.

Also read: What is article 131? Why has Kerala Government invoked article to challenge CAA in Supreme Court?