10 areas in which India beats most developed countries

India, with a population of more than 1.25 billion, remains in the centre of discussion due to its unimaginable deeds and beliefs. Although India is still in the category of developing countries, but there are some areas where it has gone ahead of developed countries. In this article we are giving details of 10 characteristics of India which can be considered as better than the developed countries. 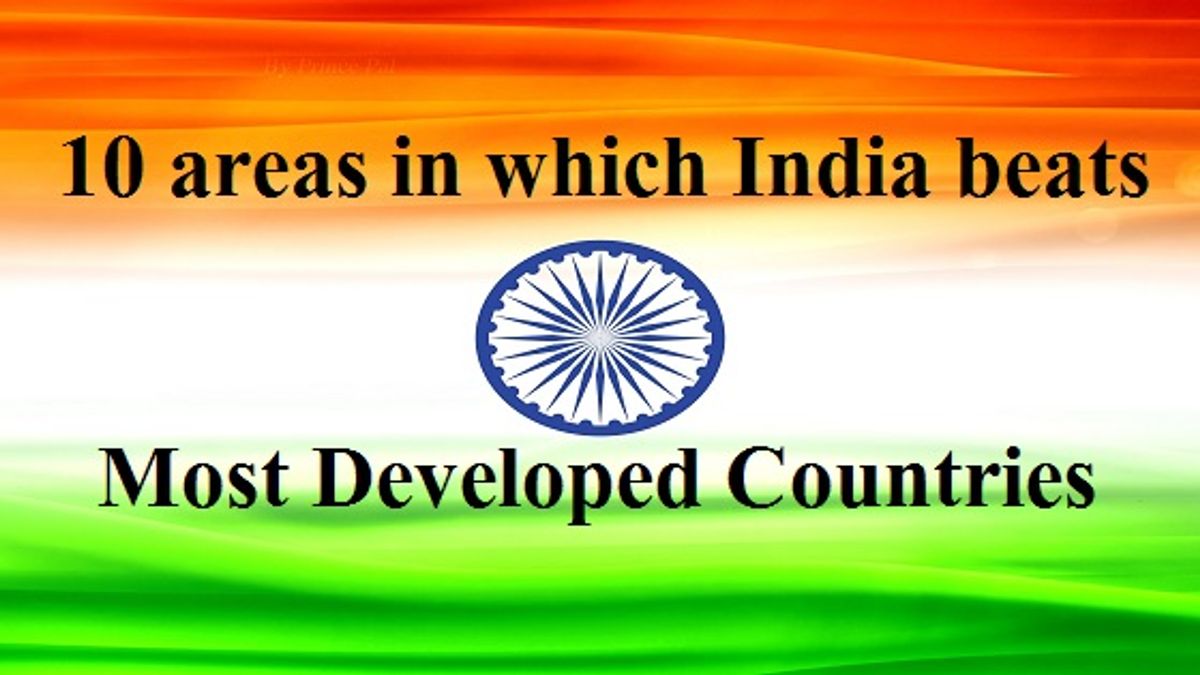 10 areas in which india beats most developed countries

India, with a population of more than 1.25 billion, remains in the centre of discussion due to its unimaginable deeds and beliefs. Although India is still in the category of developing countries, but there are some areas where it has gone ahead of developed countries. In this article we are giving details of 10 characteristics of India which can be considered as better than the developed countries.

10 areas in which India beats most developed countries Image source: MensXP.com
Due to sharing border with countries like China and Pakistan, armed with nuclear weapons, Indian Army has been trained to fight on snowy peaks. Gulmarg, the world's highest maneuver site located in Kashmir, is so famous that forces of powerful countries like America, Britain and Germany come here time to time to get training. Apart from this, the victory of Indian Army at is a great example of tremendous valor. Image source: Tengrinews
A few decades ago, India was dependent on US satellites to achieve meteorological data. As a result of this slow process, more than 20,000 people died in cyclonic storm in Orissa in 1999. Moving forward in this direction, India has overtaken US in terms of remote sensing capabilities in 2015. Today, we are self-reliant to assess the detailed impact of groundwater prospects, mapping, crop area and production estimation, the potential area of fishing on the basis of chlorophyll, the prediction of sea surface temperature, description of biodiversity and other development projects.
15 interesting facts about ATM

3. A major country to use "thorium" for nuclear program Image source: www.rajpathnews.com
In the present scenario countries around the world are struggling to find an alternative of uranium as a nuclear fuel, India's nuclear program is already being operated by thorium. Since thorium is found abundant in India, therefore our talented scientists have surprised the whole world by using "Thorium" instead of uranium as a nuclear fuel.

4. Founder of Yoga and Ayurveda Image source: Motivate My India
At the present time, discussions about yoga are going on in the whole world. After the consent of 192 countries in the United Nations, 21st June has been declared as "World Yoga Day". Thus, the ancient Yoga tradition and heritage of India has been recognized by all countries of the world. Through yoga, people get relief not only in physical diseases, but also in mental diseases. Apart from this, the importance of yoga and Ayurveda has also been recognized in the modern medical system.

5. The first Asian and the fourth country of the world which launched satellite in the orbit of "Mars" Image source: HowTechnologyWork
Nowadays, there is a strong discussion about India's Mars mission in the world. After the success of Mars mission, India has become the first Asian and fourth country of the world, which launched satellite in the orbit of "Mars". The most widespread aspect of India's success is cost of this mission. India has succeeded in launching Mangalyaan in the orbit of Mars in less than Rs. 450 crores. Image source: SSBCrack
With approximately 11.5 lack active soldiers and 9.6 lack reserve soldiers, Indian Army is the world's third largest army. Apart from this, their share of all types of defence personnel working in India is more than 80%.
Hunger Problem in India:Some Awakening facts Image source: NewsMobile
At the present time, no country can promote growth without use of the internet. In order to increase Internet usage in any country, it is necessary to be high number of users. India is the second largest country in the world in terms of number of Internet users at the present time. Even though only 29% of the people have internet access in India, approximately 35,40,00,000 people are using internet in India. This number is much higher than the number of Internet users in countries like USA, Japan and Russia. Image source: www.nuclearweaponsfree.org
After independence, India's nuclear capacity has increased significantly in the short span of 70 years. India is at the first place in the development of thorium-based fast breeder reactors. Apart from this, 21 nuclear reactors are running in India's 7 nuclear power plants, with a total production capacity of 5780 MW. At the same time, the Indian government is working towards building six more reactors. According to the group of American scientists, India is working on the construction of approximately 75-110 nuclear weapons.

10. World's second largest country in the term of Information Technology (IT) industry India has achieved tremendous success in the field of information technology. Due to this success, Indian IT industry has come second in the world. You will be pleasantly surprised to know that in the upcoming five years, we will be surpassed China in the field of IT industry and come to the first place.
After reading these 10 achievements, you can proudly say that despite being a developing country, today India is fighting in many areas with developed countries of the world and in some areas it has already passed beyond the developed countries.

Meaning of unique number which randomly display on TV screen