Abraham Lincoln was one of the great American leaders. He was the 16th President of the United States from 1861 to 1865, during the American Civil War. In his tenure, he protects the Union. Let us have a look at Abraham Lincoln's early life, family, education, political journey, and some interesting facts. 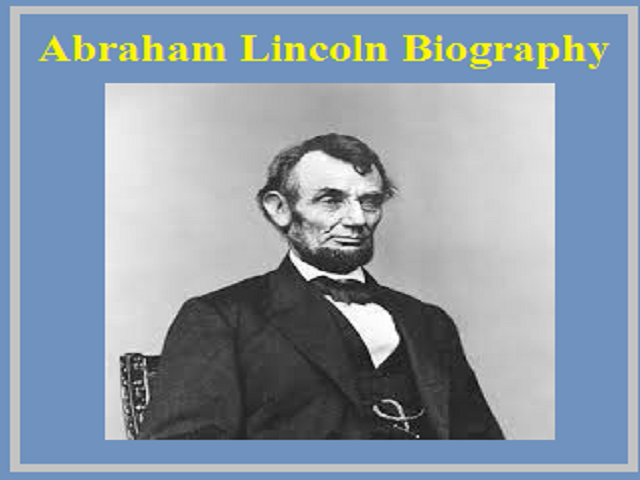 Abraham Lincoln was a humane personality, saviour of the Union and emancipator of the slaves. Abraham Lincoln's memorial is situated in Washington, D.C and dedicated to him on 30 May, 1922.

Abraham Lincoln was born on 12 February, 1809 near Hodgenville, Kentucky to Thomas Lincoln and Nancy Hanks Lincoln. He grew up in a poor family in Kentucky and Indiana. Abraham Lincoln's had one sister Sarah and one younger brother Thomas who died in infancy. Abraham's mother died on 5 October, 1818 due to tremetol that is milk sickness when he was 9 years old.

Just after a year of his mother's death, Abraham's father married Sarah Bush Johnston, a widow who had three children of her own. Due to land disputes, Abraham Lincoln and his family moved from Kentucky to Perry County, Indiana in 1817.

He went to school for one year and later he studied on its own in continuity to improve his knowledge. In March 1830, his family migrated to Macon County Illinois. There was a village of about 25 families named New Salem on Sangamon River where he settled. He performed several jobs including stints in postmaster, surveyor, and shopkeeper. After this, he entered into politics.

Who was Charles Darwin?

In 1832, Black Hawk War broke out and he was enlisted as a volunteer and elected captain of his company. Aspiring as a legislature, he was defeated in his first try and then re-elected to the state assembly. He studied grammar and mathematics and started studying law books. In 1836, he passed the bar examination and became a lawyer and started practicing.

When Lincoln joined politics, slavery was flaring up, mainly in new territories that were added to the Union. Lincoln was the leader of the new Republican Party and was considered politically moderate. He advocated the restriction on slavery to the states where it existed and in 1854 described slavery as an issue that to be solved. In a senatorial race in 1858, he lost but won national recognition as a strong political force. His inspiring thoughts gained him more popularity.

In the 1860 election, Abraham Lincoln was a presidential candidate and won by approximately 400,000 popular votes and carried the Electoral College.

By 1 February, 1861, Mississippi, Florida, Alabama, Georgia, Louisiana, and Texas had also seceded. Soon after, the Civil War began. As the war was in Progression, Abraham Lincolns commitment with the nation, finally signed the Emancipation Proclamation in 1863. It is a document to make Confederate states slavery-free but it did not address the legality of slavery in Missouri, Kansas, or Arkansas or Nebraska territory.

Let us tell you that Abraham Lincoln was the tallest President at 6'4. He was an animal lover person. He had a variety of pets at his residence White House including a pet named Jack and a goat called Nanko.

He is remembered as the Great Emancipator. On 14 April 1865, John Wilkes Booth a well-known actor assassinated Abraham Lincoln at Ford's Theatre in Washington, D.C.

Abraham Lincoln worked and assured victory in the Civil War and also worked to end slavery in the United States.

"No president in American history ever faced a greater crisis and no president ever accomplished as much." - Michael Burlingame

National Productivity Day 2020: All you need to know