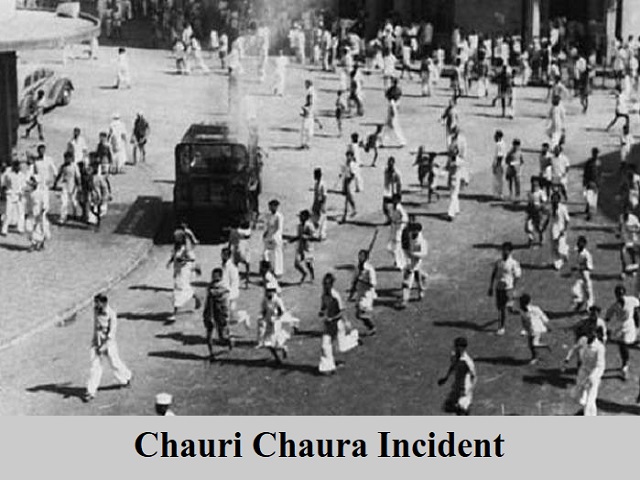 Hon’ble PM Shri @narendramodi inaugurated the #ChauriChaura Centenary Celebrations today, the day that marks 100 years of the landmark incident in the country’s fight for independence. Have a look at the key highlights of the event. pic.twitter.com/xJmEQPUA5z

Prime Minister Modi saluted the brave martyrs and stated that their sacrifices made at Chauri-Chaura, gave a new direction to India’s freedom struggle. The incident which happened a hundred years ago in Uttar Pradesh's Chauri Chara was not just an arson incident but the message was far wider.

He further stated that due importance is now being given to the historical struggle of Chauri Chaura in India’s history. Every Indian village will now remember the heroic sacrifices in the events planned throughout the year and having such a celebration at a time when India is entering its 75th year of independence, will make it more relevant.

Prime Minister Modi lamented at the lack of discussion about the martyrs of Chauri-Chaura and stated that the martyrs may not have figured prominently in the pages of Indian history but their bloodshed for freedom is definitely in the nation's soil.

Prime Minister Narendra Modi urged the people to remember the efforts made by Baba Raghavdas and Mahamana Madan Mohan Malaviya which saved around 150 freedom fighters from hanging. He also expressed happiness upon the involvement of the students in the campaign which would not only increase their awareness but will also reveal untold aspects of freedom struggle.

It is important to note that the Ministry of Education has invited young writers on the completion of 75 years of independence to write a book on freedom fighters to showcase unsung heroes of freedom struggle.

Prime Minister Modi further lauded the efforts of the Uttar Pradesh Government for organizing the programs to connect to the local arts and culture as a tribute to our freedom fighters.

On 2 February 1922, Non-cooperation Movement was led by a retired Army soldier Bhagwan Ahir against high food prices and liquor sale. The protestors were beaten by the local police and several leaders were imprisoned at the Chauri Chaura police station.

In response to this incident, around 2,000 to 2,500 protesters assembled at Chauri Chaura, Gorakhpur district of the United Province, British India (present-day Uttar Pradesh, India) and began marching towards the market on 4 February 1922. They picketed a liquor shop following which their leader was beaten and imprisoned.

A group of protestors gathered in front of the local police station, demanding the release of their leader while another group continued marching towards the market and raised anti-government slogans. In an attempt to disperse the protestors, the police fired shots in the air which worsened the situation as protestors began throwing stones at the police.

To control the situation, the sub-inspector in charge ordered the police to open fire on the advancing crowd-- killing three and injuring others. In the ensuing chaos, the heavily outnumbered police get back to the police station while the angry mob advanced and set the police station ablaze, killing all of its occupants. The incident resulted in the death of 22 policemen.

In view of this incident, Martial law was imposed by the British administration in and around the Chauri Chaura area. Raids were also conducted and hundreds of people were arrested in response to the killing of policemen.

A total of 228 people were brought to trial on charges of 'rioting and arson' in relation to the Chauri Chaura incident. Out of the said number, 6 people died in police custody while 172 were sentenced to death by hanging.

This led to widespread protests and Indian Communist leader M.N. Roy termed it as 'legalised murder' and called for a general strike of the Indian workers.

On 20 April 1923, the Allahabad High Court reviewed the death verdicts. 19 death sentences were confirmed by the Court while 110 were sentenced imprisonment for life and others were sentenced to long jail terms.

2- In 1971, an association named 'Chauri Chaura Shaheed Smarak Samiti' was formed by the people of the district. In the year 1973, a 12.2 metres high triangular minaret was constructed by the association near the lake at Chauri Chaura at a cost of Rs. 13,500.

3- Government of India built a Shaheed Smarak to honour the people hanged by the British authorities. The named of those who were executed are engraved upon it. A library and museum have also been set up near the memorial and is related to India's independence struggle.

4- Chauri Chaura Express, which runs from Gorakhpur to Kanpur, is to honour those executed after the incident.

What is Chauri Chaura Centenary Celebrations?

Prime Minister Modi inaugurated 'Chauri Chaura' Centenary Celebrations at Chauri Chaura, Gorakhpur, Uttar Pradesh and released a postal stamp dedicated to the event via video conferencing on 4 February 2021. The state of Uttar Pradesh is holding state-wide celebrations to celebrate the centenary year of the historic Chauri Chaura incident. Special programmes will be conducted at the Samadhi of the martyrs in every district of the State.

How many policemen were killed in Chauri Chaura incident?

Around 22 policemen were killed in Chauri Chaura incident.

When and where the Chauri Chaura incident happened?

What is Chauri Chaura incident?

A group of protestors who were participating in the Non-cooperation movement, clashed with the police at Chauri Chaura who open fired on the advancing protestors, leaving three dead. In retaliation, the protestors set ablaze the police station killing 22 policemen.
Comment ()