What is Coal Mining and how is it done?

Coal Miners are the people who have worked for centuries and their importance rose during the industrial revolution when coal was burnt on a large scale and used as a fuel in locomotive engines and heat buildings. Let us study about coal mining and how is it done. 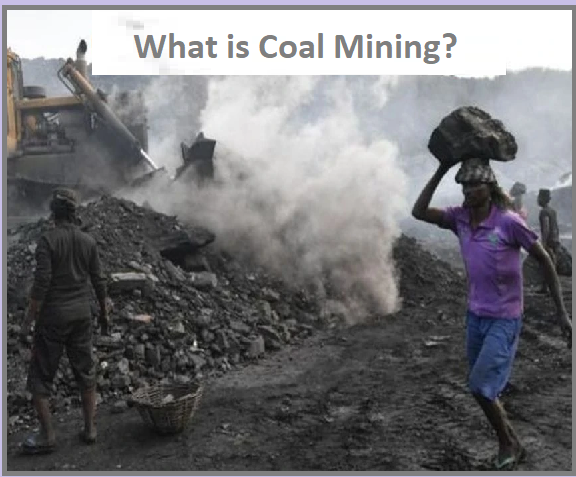 What is Coal Mining?

Coal is a basic form of energy. It is solid carbon-rich material and one of the most important primary fossil fuels. Usually, it is brown or black in colour and most often occurs in stratified sedimentary deposits. The ten leading countries in coal production are China, United States, India, Australia, Indonesia, Russia, South Africa, Kazakhstan, Colombia and Ukraine.

What is Coal Mining?

Coal mining is the extraction of deposits of coal from the surface of the Earth from the underground. Coal is the most abundant fossil fuel on Earth. It is always used for producing heat energy. In 18th and 19th century, during industrial revolution coal is the basic fuel used. Since mid 20th century, coal has yielded its place to petroleum and natural gas as the main energy supplier of the world.

Why is World Day for Safety and Health at Work celebrated?

How is Coal Mining done?

Do you know that coal miners use giant machines to remove coal from the ground? They use two methods for it: surface or underground mining. Since 1978, due to new technology coal produced by one miner in the surface in an hour becomes more than tripled.

Surface mining: It is used to produce most of the coal in the U.S. because it is less expensive than underground mining. Let us tell you that when the coal is buried less than 200 feet underground, surface mining is done. In this type of mining giant machines remove the top-soil and layers of rock to expose large beds of coal. Once the mining is done, the dirt and rock are returned to the pit, the topsoil is replaced and the area is replanted.

Underground mining: It is also known as deep mining. It is done when the coal was buried several hundred feet below the surface. Some underground mines are 1000 feet deep also. To remove coal from these mines, miners ride the elevators down deep mine shafts where they run machines that dig out the coal.

Let us see developments that took place in coal mining.

In the 18th century industrial revolution began in Britain and later spread to continental Europe and North-America. International trade expanded rapidly when coal-fed steam engines were built for the railways and steamships. Until the late 19th century, the coal was mined underground using a pick and shovel and children were often employed underground in dangerous conditions. In 1880s coal cutting machines were introduced. And in 1912, surface mining was conducted with steam shovels designed for coal mining.

Let us tell you that in India coal mining began in 1774 when John Sumner and Suetonius Grant Healthy of the East India Company commenced commercial exploitation in the Raniganj Coalfield along the Western bank of Damodar River. Further, the introduction of steam locomotives in 1853 boosted demand and production of coal increases. In India, coal-rich regions are Orissa, Jharkhand, West Bengal, Chhattisgarh and some central and southern parts of the country.

Mainly miners spend their day's tunnelling, digging and extracting coal from the mines. We know that nearly more than half of India's commercial energy needs are fulfilled by coal. It is the main fuel for generating power, making steel and cement.

But we can't ignore the fact that mining is also a major factor in environmental pollution, emitting smoke and gases that affect the environment. Several miners while working faces diseases like lung disease which is caused due to the inhalation of coal dust the whole day.

So, we can say that mining is one of the most dangerous professions. It is ironic that many of the coal miner’s risk their lives, health to provide coal in India and they itself do not have electricity. Even they have very little that would qualify as a basic necessity. It is a vicious circle that generation and generation are indulged in coal mining.