Blood is a red colour pigment that circulates in the body. It contains plasma, red blood cells, white blood cells, and platelets. It performs various functions in the body. Let us study in detail about the composition and function of blood, its components, blood transfusion, blood pressure, and blood group. 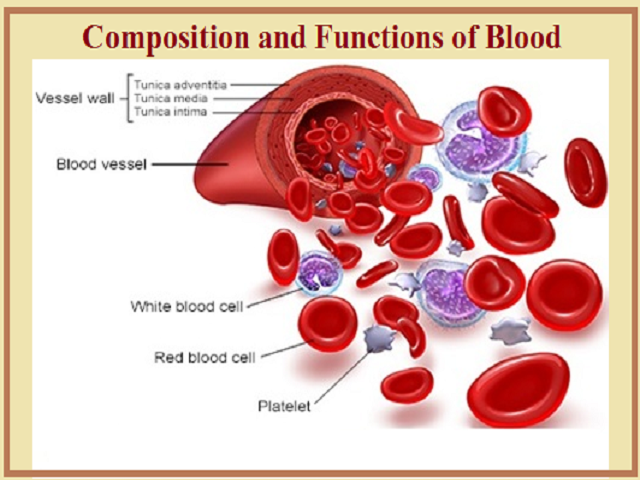 Composition and Functions of Blood

Blood is a connective tissue that helps in the transportation of substances, protects against diseases and regulates the temperature of the body. Do you know why the colour of blood is red?

First, we will study about Plasma.

Plasma is a liquid also known as the fluid matrix and consists of three types of cells that keep floating in it namely red blood cells, white blood cells, and platelets.

Blood has three main functions in the human body i.e Transport of substances from one part of the body to the other like respiratory gases, waste products, enzymes, etc, protection against diseases and regulation of body temperature.

On average, a healthy man has about 5 litres of blood in the body, while a woman has about 500 ml less than man. So, total blood is about 60-80 ml/kg of body weight.

The fluid or liquid part of blood is called plasma. It is a colourless liquid that contains 90% water, protein, and inorganic salts. Plasma also contains some traces of other substances like amino acids, organic acids, vitamins, pigments and enzymes. It carries these dissolved substances from one part to another part in the body. The protein in plasma includes antibodies to assist in the body’s defence system against disease and infection.

RBC is also known as erythrocytes. They are disc-shaped cells concave in the middle and visible under a microscope. RBC carries oxygen from the lungs to all the cells of the body. They have no nucleus and contain a pigment called haemoglobin which is made up of an iron-containing pigment known as haema and a protein called globin. RBCs are produced in the spleen and the bone marrow and live for about four months because they lack a nucleus. So, when we donate blood to save the life of a person, then the loss of blood from our body is recovered within a day because red blood cells are made very fast in the bone marrow. The life of the RBC is about 100-120 days.

What is Bombay Blood Group and how it is discovered?

WBC is also known as leukocytes. They fight with infection and protect us from diseases because they eat up the germs which cause diseases. That is why they are also known as ‘soldiers’ of the body’s defence system. They are round or irregular, semi-transparent cells containing a nucleus and visible under a microscope. They are a little larger than RBC. Some White blood cells make chemicals called ‘antibodies’ to fight against infection i.e why they provide immunity in our body. WBC in the blood is much smaller in number than red blood cells.

Blood Platelets are also known as thrombocytes. They are tiny, circular or oval colourless cells formed in the bone marrow. They lack a nucleus and help in the coagulation of blood (clotting of blood) in a cut or wound, due to which bleeding stops. All the blood cells are made in the bone marrow from the cells called stem cells.

Blood clotting is a body’s defence system to combat bleeding. Plasma contains soluble protein fibrinogen of the blood which produces the insoluble protein called fibrin essential for blood coagulation which is formed in the liver.

In an injury blood platelets break down and release an enzyme which helps in the formation of fibrin from fibrinogen. This fibrin forms clot in the form of a mass of fibres which stops bleeding from blood vessels. After clotting, a straw-coloured fluid called serum is left.

In 1900-1902, K. Landsteiner classified human blood into four groups A, B, AB and O. The cells of these group contains corresponding antigens – A, B and AB except O. That is why O is donated to any of the groups and so is known as Universal donor. AB group is known as Universal recipient because it can receive A, B, AB, and O blood groups.

It is a blood antigen discovered in 1940 by Landsteiner and A.S Weiner and played an important role during a blood transfusion. The Rh factor is an agglutinogen found in RBC of most people called Rh+. It was initially found in the rhesus monkey and later in man. People who do not have this antigen in their blood are called Rh-. The Rh- blood does not carry anti- Rh antibodies naturally but could synthesize them if synthesized through blood transfusion of Rh+ blood. If Rh+ blood is transfused into an Rh- patient, the serum will produce anti-Rh agglutinin. If another dose of Rh+ blood is given, the anti-Rh agglutinin will cause clumping of RBC of the donor’s blood as soon as it enters the patient receiving it.

Erythroblastosis Foetalis: If the father's blood is Rh+ and the mother's blood is Rh- then the child to be born dies at the pregnancy or short span of time after birth. Basically, this happens in the case of the second issue.

This technique was first developed by James Blundell in 1825. The injection of blood from one person (donor) into the circulatory system of another is called a blood transfusion. It is done after the proper matching of blood groups and the Rh factor.

‘Circulatory system’ or ‘Blood circulatory system’ is the main transport system in human beings. In this blood carries oxygen, digested food and other chemicals like hormones and enzymes to all parts of the body and take away waste products like carbon dioxide and urea. Therefore, the human blood circulatory system consists of the heart which pumps and receives blood and the blood vessels through which blood flows in the body.

In the circulatory system, blood flows through three types of blood vessels: Arteries, veins, and capillaries. The blood vessels are present in all parts of the human body so, that blood reaches everywhere in the body.

There is another system with the blood circulatory system for transport in human beings is the Lymphatic System. Lymph is the liquid that circulates and carries materials in the lymphatic system. Thus, we can conclude that in Human beings, the various substances are transported through two liquids called ‘blood ‘and ‘lymph’.

Haemolymph: Body fluid of Arthropoda is a colourless made of plasma and haemocytes. It do not contain any respiratory pigment like a cockroach.