‘Daksha’ a Remotely Operated Vehicle (ROV) is a robot built for anti-terror activities. ‘Daksha’ is an electrically powered robot that can be controlled from a distance of 500 meters and can be used continuously for 3 hours after a single recharge. There are around 500 ‘Daksha’ going to be included in the Indian Army. 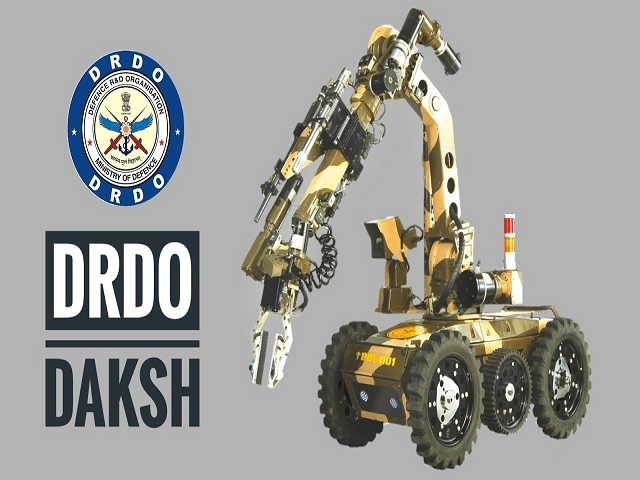 The war or cold war is a worldwide phenomenon. Almost every country of the world have some border and economic disputes with its neighbour country. This warlike situation turns into real war and the soldiers of both sides die in this tussle.

So every rich country in the world is building a robotic army so that loss of life and property can be reduced.

The battery-powered robot 'Daksha' is primarily designed for the safe handling and destruction or detection of IEDs using multiple cameras, X-ray devices. It has a shotgun, which can break the closed doors. The scanner installed in it can scan cars to check explosives.

Daksha can be used to detect IEDs and other explosive elements at the border, which can save the lives of many Indian soldiers during patrolling.

This ROV has been developed indigenously. There are 20 units of Daksha have been awarded to DRDO’s Research and Development Establishment (R&DE – Engineers) in September 2010.

The  Daksha robot has been developed by R&DE – Engineers in collaboration with Tata Motors, Theta Controls, Bharat Electronics (BE) and Dynalog (I).

As per some media reports; there are 500 more units of Daksha are going to be included in the Indian Army soon.

1. It is fully automatic

2. It can destroy biological, chemical and radiological weapons.

3. It has a radio frequency shield that can jam the signal and prevent it from exploding.

4. It can detect any suspicious luggage at the airport and destroy it by taking it out of the airport or away from the crowd.

5. It can lift any object with the help of its robotic arm. If, it is IED or bomb; then it can diffuse it with its water jet disrupter.

6. It has X-ray devices that can scan any car/vehicle for explosive materials.

7. It also has slotted wheels, which help it in climbing the stairs at the time of requirements.

Indian Army's director-general major general Rakesh Bassi said the robot will be an important asset for the anti-terrorist operations and special gift to the army’s bomb disposal units.

Therefore, the inclusion of skilled robots in the army will increase the security of India's border, along with the reduction of incidents of IED blasts during patrolling and ultimately reduction in terror activities.