Deep-sea mining: What is it, its importance, impact on the environment and India's Samudrayaan project

This article will guide you about deep-sea mining, its importance, impact on the environment, and India's proposed 'Samudrayaan' project. 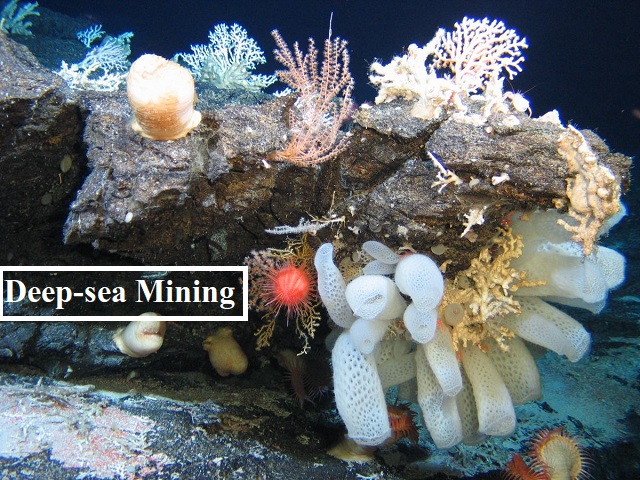 With the growing interest in the mineral deposits of the deep-sea, countries such as China, France, Germany, Japan, South Korea, and Russia and small island nations such as the Cook Islands, Kiribati, have joined the race to mine the deep-sea to meet the rising demand of the metals.

This article will guide you about deep-sea mining, its importance, impact on the environment, and India's proposed 'Samudrayaan' project.

What is deep-sea mining?

It is the process to retrieve mineral deposits from the deep-sea. Deep-sea is the area of the ocean below 200 m, covering around 65% surface of the Earth. Many nations are in a race to mine deep-sea to meet the rising demand of the metals.

Why is the study of deep-sea important?

The seabed comprises of an extensive array of geological features such as abyssal plains 3,500–6,500 m below the sea surface, volcanic underwater mountains, hydrothermal vents with bursting water heated by volcanic activity, and deep trenches. The seafloor also contains species which have uniquely adapted themselves to harsh conditions including lack of sunlight, poor oxygen, low temperature, high pressure and so forth.

Thus, to connect the dots between biodiversity and ecosystem, and to limit environmental impacts of mining activities, there is a need to study seafloor.

Impact of mining activities on the biodiversity and ecosystems of the deep-sea:

1- Disturbance of seafloor: The scraping of the seabed by machines can either alter or destroy deep-sea habitats, leading to fragmentation or loss of ecosystem structure and function.

Also, most of the species living in the deep sea are endemic (not found anywhere else on Earth) and the physical disturbances at a mining site may possibly wipe out entire species. 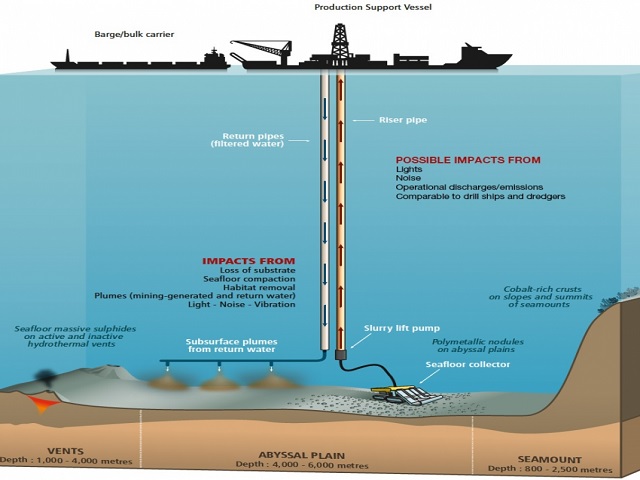 2- Sediment plumes: Deep-sea mining may also result in stirring up fine sediments on the seabed such as silt, clay and the remains of microorganisms, creating plumes of suspended particles in the ocean.

It is indistinct how far these particles may scatter past the mining zone, how long it would require for them to resettle on the ocean floor, and to what extent they may negatively impact ecosystems and species.

3- Pollution: Noise, vibrations, potential leaks, spilling of toxic products or fuels and light pollution caused by mining equipment and surface vessels may have a negative impact on the species.

Rising interest in the mineral deposits of the deep-sea

The interest in the mineral deposits of the deep sea has arisen in the past few years due to the depleting terrestrial deposits for metals such as copper, nickel, aluminium, manganese, zinc, lithium and cobalt. Also, there's an increased demand for the said metals in manufacturing smartphones, wind turbines, solar panels and so on.

Earlier, only the size and extent of mineral deposits in the deep sea were explored but by May 2018, the International Seabed Authority (ISA) issued 29 contracts for the exploration of deep-sea mineral deposits. 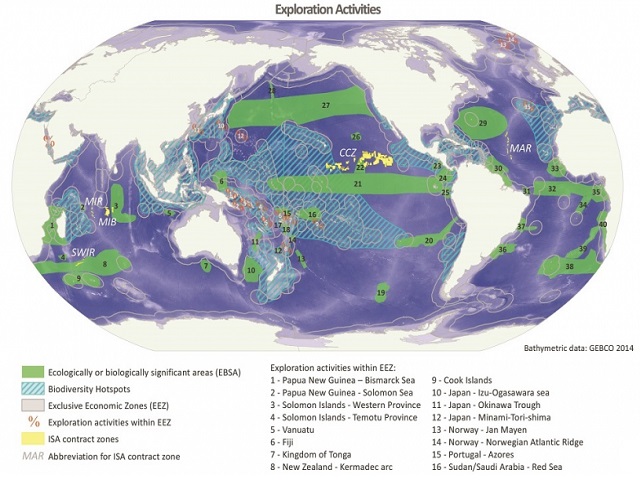 Strategies to limit the environmental impacts of mining activities

3- Mitigation: To avoid loss of biodiversity and long-lasting negative impact on the environment; large areas must be protected to leave the seafloor undisturbed, in addition to precautionary controls on the permissible extent and duration of mining operations.

4- Three R's: The three R's-- Reduce, Reuse and Recycle must be encouraged to minimize the demand for raw materials from the deep-sea.

Samudrayaan is India's proposed project to explore the deep-sea area. Under this project, three aquanauts will be sent in a submersible vehicle to study the deep-sea. The project has been undertaken by the National Institute of Ocean Technology (NIOT) and is in line with ISRO's Gaganyaan mission.

1- It is a pilot project of Ministry of Earth Sciences (MoES), Government of India, for deep-sea mining of rare minerals.

2- Three aquanauts will be sent into the deep-sea in a submersible vehicle to a depth of about 6,000 metres to conduct several deep-sea studies.

3- The indigenously developed vehicle is capable of crawling on the seafloor at a depth of six-kilometre for 72 hours.

4- Deep-sea mining is expected to commence in the year 2022 with a projected expenditure of Rs. 200 crores.

Which Ministry will lead the deep-ocean mission of India?

Ministry of Earth Sciences (MoES) will lead the deep-ocean mission of India. The project has been undertaken by the National Institute of Ocean Technology (NIOT) and is in line with ISRO's Gaganyaan mission.

It is India's proposed project to explore the deep-sea area. Under this project, three aquanauts will be sent in a submersible vehicle to study the deep-sea.

Is deep-sea mining bad for the environment?

Deep-sea mining can negatively impact biodiversity and ecosystems of the deep-sea by causing disturbances in the seabed, sediment plumes and pollution.

What is deep-sea mining?

Deep-sea mining is the process to retrieve mineral deposits from the deep-sea.
Comment ()