The geological history of the Earth is divided into several Eras. These eras are further divided into Periods, which are sub-divided into Epochs. Durations of each Period have been demarcated and the evolution of vegetation and animals are explained accordingly. In this article, we are giving the Earth's history into a series of time intervals which called geological time scale. 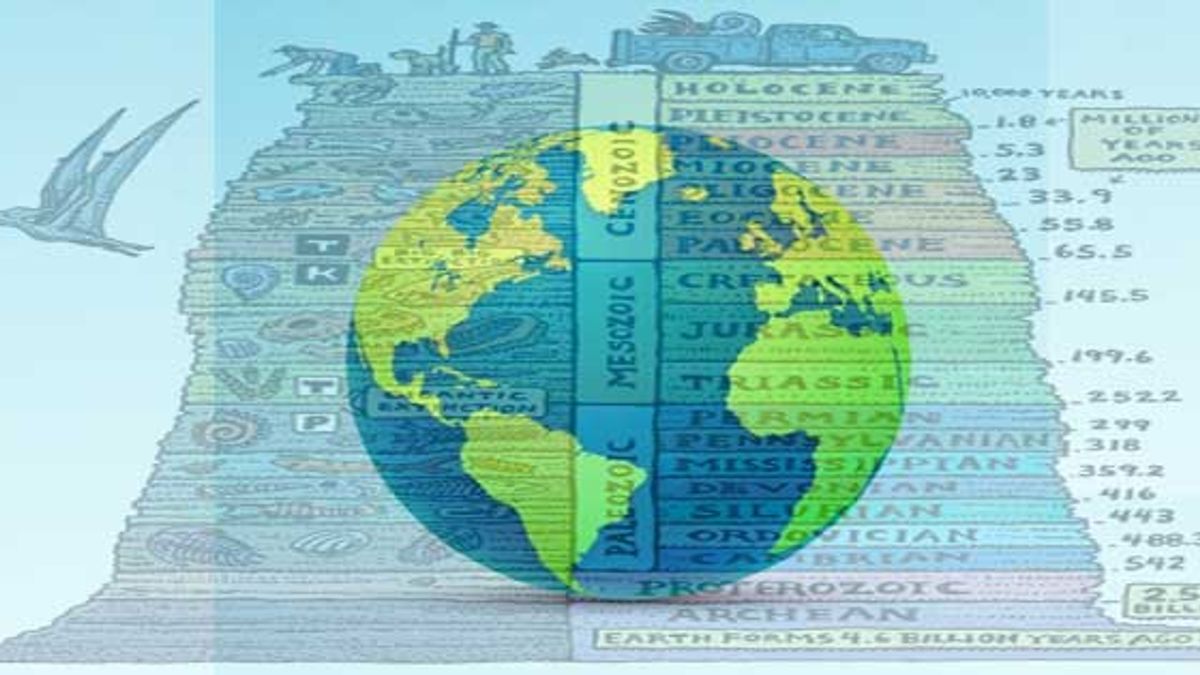 The Geological Time Scale is a system of chronological measurement that relates stratigraphy to time and use by geologists, palaeontologists and other Earth Scientists to describe the timing and relationships between events that have occurred throughout the Earth’s history.

The age of the Earth is estimated to be about 4.6 billion years. The estimation of the Earth’s age is based on the study of radioactive elements, is believed to be the most authentic. The geological history of the Earth is divided into several Eras. These eras are further divided into Periods, which are sub-divided into Epochs. Durations of each Period have been demarcated and the evolution of vegetation and animals are explained accordingly.

Human develop in this period. This period is called 'Age of mammals'. Dinosaurs and many other species were extinct in this period. The term Cenozoic means 'new life'. It is divided into three periods: the Paleogene, Neogene, and Quaternary; and seven epochs: the Paleocene, Eocene, Oligocene, Miocene, Pliocene, Pleistocene, and Holocene.

This period is further divided into two Epochs:

This period is further divided into five Epochs:

It began about 65 million years ago and continues into the present, is the third documented era in the history of Earth. It was introduced by English geologist John Phillips in an 1840. The global climate was much warmer than it is today, and the overall climate of the Earth was much more consistent regardless of proximity to the equator.

Do you know the meaning of Oxygen Minimum Zone and Dead Zone?

It is an interval of geological time from about 252 to 66 million years ago. It is also called the Age of Reptiles a phrase introduced by the 19th century palaeontologist Gideon Mantell. This era was dominated by the first flowering plants, emergence of birds and dinosaurs. It is divided into three periods (from oldest to youngest):

The climate of the Earth was warm and there was hardly difference between equatorial and polar latitudes as compare to today's world. It was a time of continental assembly. The majority of Cambrian landmasses were gathered together to form Gondwana, a supercontinent made up of the present-day continents of Africa, South America, Australia, and Antarctica and the Indian subcontinent. It is subdivided into seven geologic periods (from oldest to youngest):

All the above era were evolved from the Precambrian Eon which comprises the 88% of geologic time which means 4500 million years ago. It was an Era when the Earth was originated, a first multi-celled organism appears and first one celled organisms were evolved. Our geological time scale was created to show the duration of the time unit.