Why is there a demand for Greater Tipraland? Know all details here

As per recent events, there is a demand of Greater Tipraland again. Know about benefits and the political will behind it here. Read the article below for the details on the issue, the reason for this unending demand and about Tipraland and Greater Tipraland 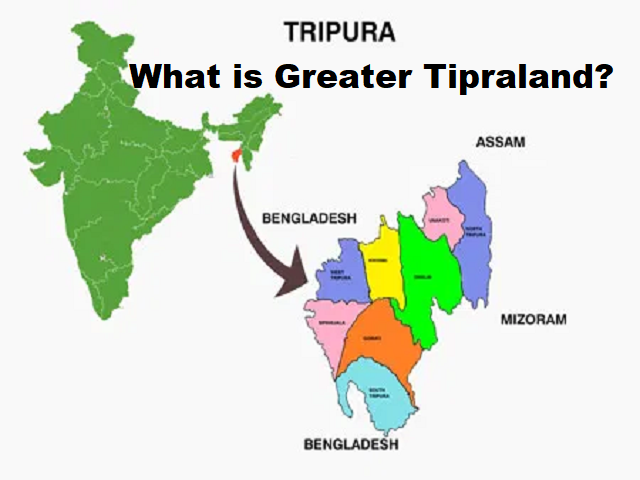 After a recent election in Tripura's Tribal Areas Autonomous District Council (TTAADC) an alliance of various political parties was formed which was initiated by Pradyot Kishore manikya Debbarma. The party swept off the TTAADC by covering almost 70% of the polls. Again TIPRA Motha has emerged as the majority seat taker in the results of election of April 2021. The support it needed was given by Indegenious Nationalist Party of Tripura.

Earlier, Pradyot Kishore Manikya announced his political demand of Greater Tipraland after seventeen months of resigning for the position of Congress State President. He claimed it back then that it would be serving the interests of tribals, non tribals, Tripura tribals outside Tripura and many in Bangladesh.

As per Pradyot Kishore the demand for Tipraland is a democratic issue and the demand of Greater Nagalim. The Greater Nagalim idea was floated by the rebel Naga agency- NSCN (IM). It is now involved in peace talks with the central government.

The new demand seeks to include every tribal person living in indigenous area or village or village outside the Tripura Tribal Areas Autonomous District Council (TTAADC) under the proposed model.

Political Standing of the issue:

TIPRA has emerged as the single-largest political party of Tripura, with Pradyot's new political maneuvering, . The royal scion has also announced an  alliance with all major tribal political parties where two parties majorly are Tipraland State Party and Indigenous Peoples Front of Tripura.

The ‘Greater Tipraland’ is said to be in consonance with the demand of ‘Tipraland’ which is a proposed separate state for tribals of Tripura. This idea was floated in 2009 and also was the main poll agenda which led to the victory in 2018 assembly election.

The oldest tribal party has also joined the cause and has supported TIPRA. It said that while Tipraland was only restricted to ADC, Greater Tipraland would be a better extension to it.

The formation of Tipraland that is a state within the Tripura Tribal Areas is a political agenda. It is to be formed under articles 2 and 3 of the Indian Constitution and has been demanded by a political party called the Indigenous People's Front of Tripura (IPFT). Take a look at the map below.

The indigenous people of Tripura had demanded for an autonomous district council. They finally achieved this feat on 23 March 1979. This came to be known as Tripura Tribal Areas Autonomous District Council (TTAADC)

What dialect is spoken by Tripuri people?

What are the Tripuri people also known as?

Who was the Tipraland proposed for?

Tipraland was proposed for the indegenous people of Tripura in the tribal parts of the state.

Who has recently announced the requirement of Greater Tipraland?