In a bid to conserve pollinators, India's first 'Pollinator Park' opened in Uttarakhand's Haldwani (Nanital district) on 29 December 2020 and is spread over 4 acres of land. 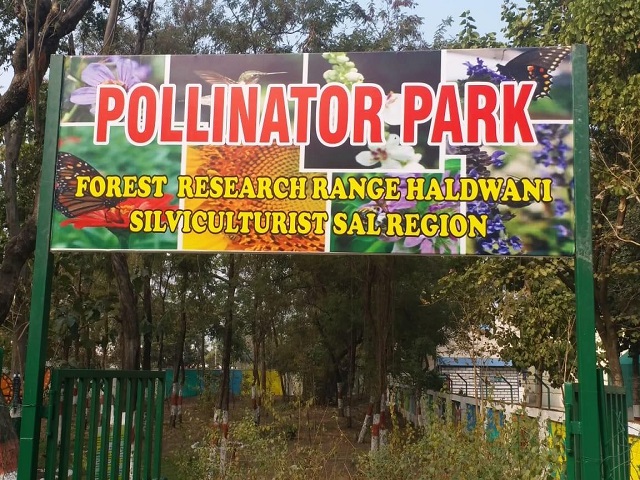 In a bid to conserve pollinators, India's first 'Pollinator Park' opened in Uttarakhand's Haldwani (Nanital district) on 29 December 2020 and is spread over 4 acres of land. Uttarakhand Forest Department dedicated the newly built Pollinator Park to the Public.

The Pollinator Park was inaugurated by lepidopterist Peter Smetacek. He is the founder of Butterfly Research Centre, Bhimtal. Speaking on the occasion, Peter Smetacek stated that the initiative is one of its kind in India and will help in generating awareness among the public on how important pollination and pollinators are. He further stated that without these species, life on earth will come to an end.

Speaking on the occasion, Head of the Research Wing of the Uttrakhand Forest Department, Sanjiv Chaturvedi stated, "The objective of the park is to conserve various pollinator species, create awareness among the general public about importance and conservation of these species and promote further research on various aspects of pollination, including a threat to habitat and impact of pollution, use of pesticides/insecticides and relation between various pollinators and plant species."

He further stated, "Somewhere between 75% and 95% of all flowering plants on the earth need help with pollination. Pollinators provide services to over 180,000 different plant species. Without them, existing populations of plants would decline, even if soil, air, nutrients, and other life-sustaining elements were available."

More than 40 pollinator species have been reared in the park which includes various species of birds, butterflies, honeybees, moths, beetles, wasps, bats and small mammals.

The endemic species of honeybee 'Apiscerana Indica' have also been reared in the park. In recent years, their numbers have declined significantly due to pollution, use of insecticides and pesticides, etc.

Habitat in the Pollinator Park

The park houses habitats for pollinators such as plantation of nectar and pollination producing plants in clusters (Marigold, Rose, Hibiscus, etc.). In addition to these, the park also has host plants to provide shelter to eggs, larvae and pupa (Curry leaf plant, Citrus species, Lantana, etc.)

To attract various bird and butterfly species, bird feeders and nests have been placed throughout the park. Foodgrains and cut fruits are also kept. Certain fruit trees such as Jamun and shelter providing trees such as Neem and Semal are also planted.

Artificial water bodies have been created and arrangements have been made for mud puddling for butterflies. It is to be noted that through mud puddling, butterflies and several other insects such as leafhoppers seek nutrients like salt, amino acids, and so forth.

Dead and dry trees have been left in the pollinator park as they serve as a habitat for various types of pollinators. Use of all types of chemicals which includes insecticides and pesticides have been totally stopped in and around the park.

Why there's a decline in the population of pollinators?

Many pollinator species are in decline due to a loss of feeding and nesting habitats, pollution, overuse of pesticides and insecticides, disease, and changes in climatic patterns, are contributing to shrinking and shifting of pollinator populations, thereby endangering our food security.

Pollinators are important for human beings as they impact 35% of the global agricultural land, supporting the production of 87% of the leading food crops globally.

They also provide pollination services to over 180,000 different plant species. Existing populations of plants would decline in the absence of pollinators, even if soil, air, nutrients, and other life-sustaining elements are available.

In other developed nations, the importance of pollinators was recognized years ago and gardens, strips, pathways and pollinator parks were created to conserve them. Campaigns were also launched on a large scale to create awareness about pollinators and pollination.

In the United States, legislative measures were taken in 2015 and 2017 to conserve the pollinators.

Some plants are self-pollinating ones, while others may be fertilized by pollen carried by wind or water. However, some plants still require a pollinator.

Any species which helps in carrying pollen from the male part of the flower (Stamen) to the female part of the same or another flower (Stigma) is known as a pollinator. For instance, bees, wasps, moths, butterflies, birds, flies and small mammals, including bats.

Some pollinators intentionally collect pollen like various bee species while others accidentally collect pollen such as butterflies, birds, bats, etc. In the latter case, pollen sticks on their bodies while they are drinking or feeding on nectar in the flower blooms and is transported unknowingly from flower to flower resulting in pollination.

What is 'Green Ramayana Park' developed by the Forest Department of Uttarakhand?

Any species which helps in carrying pollen from the male part of the flower (Stamen) to the female part of the same or another flower (Stigma) is known as a pollinator. For instance, bees, wasps, moths, butterflies, birds, flies and small mammals, including bats.

What is the address of Pollinator Park in Haldwani?

How many species of pollinators are reared in the Haldwani's pollinator park?

More than 40 pollinator species have been reared in the park such as various species of birds, butterflies, honeybees, moths, beetles, wasps, bats and small mammals.