Flood is a state of high water level along a river channel or on coast that leads to inundation of land which is normally submerged. River floodplains and coastal areas are the most hypersensitised to flooding; however, it is possible for flooding to occur in areas with unusually long periods of heavy rainfall. In this article, we are giving a brief summary on the Flood Prone Zones in India: Mitigation and Control Measures Warning which is very useful for the competitive examinations like UPSC-prelims, SSC, State Services, NDA, CDS, and Railways etc. 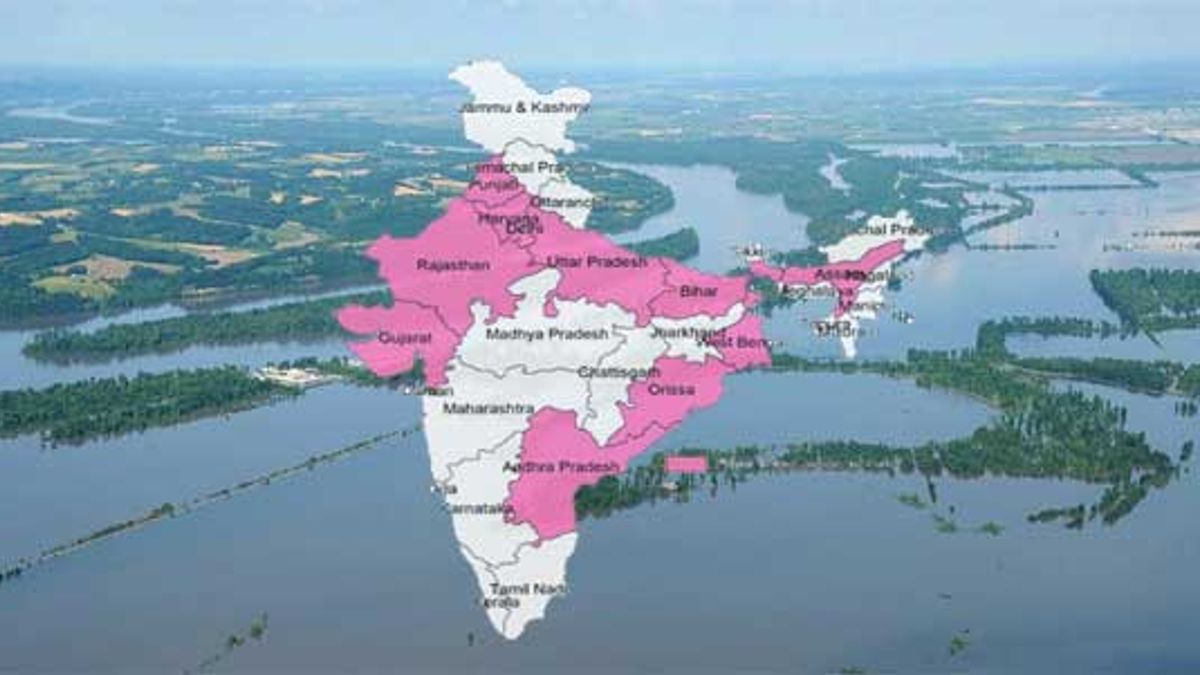 Flood is a state of high water level along a river channel or on coast that leads to inundation of land which is normally submerged. River floodplains and coastal areas are the most hypersensitised to flooding; however, it is possible for flooding to occur in areas with unusually long periods of heavy rainfall. Bangladesh is the most flood prone area in the world. Bangladesh is vulnerable due to the prevalence of a monsoon season, which causes heavy rainfall.

The major flood prone regions in India are Punjab, Haryana, most of the Gangetic plains, including Uttar Pradesh, North Bihar and West Bengal, the Brahmaputra valley, coastal Andhra Pradesh and Orissa, and southern Gujarat. Now-a-days Kerala and Tamil Nadu also feel the fury of the floods. In September 2014, the Kashmir region witnessed disastrous floods across the majority of its districts caused by torrential rainfall across the Indian administrated Jammu and Kashmir. In June 2013, a multi-day cloudburst centred on the North Indian state Uttarakhand, caused devastating floods and landslides.

The major causes of floods in India are discussed below:

List of the various methods and techniques used in Sustainable Agriculture

1. Frequent inundation of agricultural land and human settlement has serious consequences on the national economy and society.

2. Floods do not only destroy valuable crops every year, but these also damage, physical infrastructure such as roads, rails, bridges and human settlements.

3. Millions Of people are rendered homeless and are also washed down along with their cattle in the floods.

4. Spread of diseases like cholera, gastroenteritis, hepatitis and other waterborne diseases spread in the flood-affected areas.

5. Floods also make a few positive contributions. Every year, flood deposit fertile silt over agricultural fields, this is good for the crops.

With the advancement of technology such as satellite and remote-sensing equipment, flood waves can be tracked as the water level rises. Evacuation is possible with suitable monitoring and warning. A warning is issued by the Central Water Commission (CWC), Irrigation and Flood Control Department and Water Resources Department.

Mapping of the Flood Prone Areas: Flood hazard mapping will give the proper indication of water flow during floods. Land use Control It will reduce danger of life and property, when the waters inundate the flood plains and the coastal areas. No major development should be permitted in the areas which are subjected to high flooding.

Flood Control: It aims to reduce flood damage. This can be done by decreasing the amount of run-off with the help of reforestation. Flood diversion includes levees, embankments, dams and channel improvement. Dams can store water and can release water at a manageable rate. But the failure of dams in earthquakes and operation of releasing the water can cause floods in the lower areas.

Flood Proofing: It reduces the risk of damage. Measures include use of sand bags to keep flood water away, blocking or sealing of doors and windows of houses, etc. Restoration of Original Drainage System Drainage system is generally choked by the construction of roads, canals railway tracks etc. Floods could be checked if the original form of drainage system is restored.